Damon Fairclough July 31, 2014 Arts, Blasts from the Furnace, Heritage, Northern Soul writes... Comments Off on Revolution in the Bedroom at Gallery Oldham 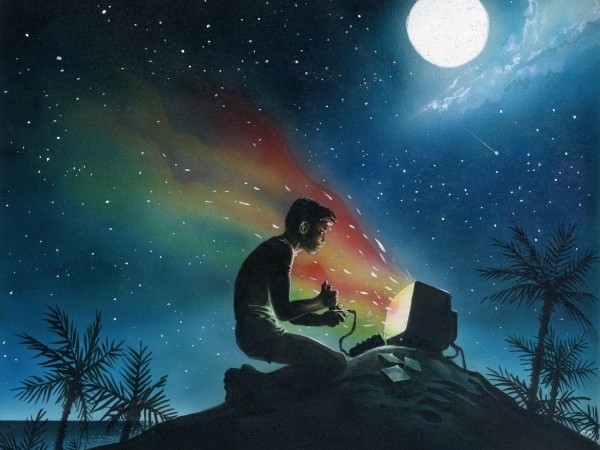 The game was startling in its simplicity but my 12-year-old son stared at the screen as if bringing an Airbus in to land.

You might think that kids raised in a world of HD interactive entertainment would spurn the cruder crack-pipe hit of more primitive gameplay, yet Ezra was hooked. Game design may now be worthy of MA status at higher education institutions throughout the land but my son had gone back to basics and was being seduced by what Mark E. Smith once called ‘the three Rs: repetition, repetition, repetition’.

Ever since I’d promised Ezra a trip to Gallery Oldham to see Revolution in the Bedroom – an exhibition of computer gaming’s first decade – we’d talked about the relative merits of older bedroom-made games against today’s immersive, multi-million dollar experiences. And here he was, apparently bewitched by powerful gaming magic that didn’t rely on blockbuster 3D graphics to cast its spell. One-nil to the olden days you might think. Except that we were still on the train, still on our way to Oldham. And the game Ezra was playing was Don’t Tap the White Tile – on my phone.

A stream of rectangular blocks cascaded down the screen; some were blue and some were white. And all Ezra had to do was…well, the clue was in the name. It was handheld, it used a touch screen, but in all other respects it seemed, if anything, even less sophisticated than the bip-bap TV tennis game that graced my family Christmas in 1979. So, before reaching our destination, I’d come to the conclusion that there was something so fundamentally ‘right’ in those original gaming mechanics, that almost 40 years later the developers are still using them, and we are still caught in their dilated, dead-eyed gaze. 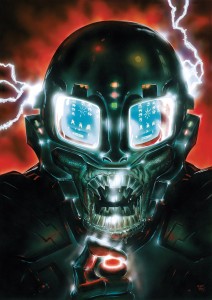 As if to prove me right, Ezra walked into the gallery and was immediately drawn to a Commodore 64 running Space Invaders. An army of crude alien spaceships drawn in dancing cathode rays advanced across its cuboid monitor. I recalled my first encounter with the game almost a thousand years ago: the screen was built into a glass-topped pub table ringed with beery skid-marks; Saturday-afternoon drinkers faced-off in frantic two-player games while I watched transfixed, my pop and crisps already driven from my mind.

“I love these old fashioned games,” chuckled Ezra. “They’re so fun to play.”

They are indeed, I concluded, as I elbowed him from the controls and demonstrated how to clear one vertical line of invaders at a time, rather in the manner of a chess grandmaster teaching a novice the principles of the game. Sensing that his space had been well and truly invaded, Ezra drifted over to a Tron arcade cabinet and found himself at the foot of a learning curve with the gradient of the Eiger’s north face. I could hardly resist a slight smirk: “You come here with your fancy modern ways, but this is how we rolled back in 1984.”

This exhibition’s full title is Revolution in the Bedroom, War in the Playground: Video Gaming 1979-1989. On tour from the National Centre for Craft and Design, it sets out to be ‘the first of its kind to explore the early years of video gaming’ when’affordable computers enabled a new generation of young bedroom programmers to contribute to the industry’. It opens with a blown-up black and white image of a Sinclair ZX81, the British-built black box from 1981 whose one whole kilobyte of raw computing power was enough to send a revolutionary charge through bedrooms across the land. Like the Sex Pistols appearing with Bill Grundy, it inspired a subculture to pop into existence almost overnight. And just like punk, it had DIY in its DNA: it was a moment when The Kids took control. 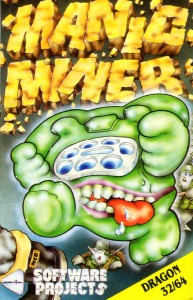 The exhibition affords ample opportunity for parents to point out the games they loved most as a kid. There are any number of museum cabinets displaying rows and rows of cassettes. From the classics that helped to write the rules of gaming such as Manic Miner and Jet Set Willy to the drunken-housewife antics of Mrs Mopp, these games, with their seaside-postcard-style packaging and eccentric themes, hint at the pioneering spirit of this bedroom underground-turned-overground – before corporate curtailing of the imagination set in.

Alas though, it remains just a hint. To really get a sense of the surreal teen genius behind these games, we need to play them. We need to release the machines that are displayed here like saintly relics. Forget the lone Commodore 64 locked into its single space-invading groove, there are working ZX81s and Spectrums for sale on eBay right now and this exhibition needs to have them up and running if the legend is ever to come to life.

The excitement engendered by these boxes was down to the fact that they weren’t designed simply for consumption. The parallel tale of arcade machines and consoles is the related story of hardware that delivered entertainment but which was closed to inquisitive eyes. The narrative that should be at the heart of this exhibition – the story of that revolution in the bedroom – derives from the proactive, programming-for-the-masses philosophy that drove sales of the ZX81, the BBC Micro and the Spectrum. By denying us access to the raw magic of those early unhinged games, and confusing the issue by offering only playable versions of imported arcade behemoths like Pac-Man and Galaxian, the exhibition quickly loses focus.

To put it simply, a Commodore 64 running Space Invaders is missing the point. The same machine running Hover Bovver however…now, that’s a story worth telling.

But there is much fun to be had for all ages at this small but densely packed exhibition. The anarchic spirit behind the early game magazines Crash and Zzap!64 is well told in video, and there are welcome displays of evocative illustrations and artwork from the era. But too much is invested in dead objects, the life that lies under those keyboards remains tantalisingly out of reach.

Ezra slept well on the train home, exhausted perhaps by a hard day spent blasting aliens from the sky – or simply by accompanying me on a nostalgic ramble through my electronic past. While he snoozed, I took the chance to begin work on this review. Or at least, I would have done, if it hadn’t been for the brutal addictive simplicity of Don’t Tap the White Tile on my phone.

So if you don’t mind, we’ll leave this article right here. Because although deadlines are pressing, I need to have just one more go. 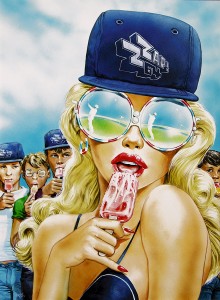 What: Revolution in the Bedroom, War in the Playground: Video Gaming 1979-1989