Turn Sideways in the Wind: Romani Life in Manchester

It seems apt that a new, sensitive exhibition exploring the lives of three Romani immigrants should be set in what was the UK’s first free public library.

The spirit of inclusiveness is embodied by Salford Museum and Art Gallery. Once home to the city’s L.S. Lowry collection (before The Lowry opened in 2000), today it presents an exciting programme of permanent displays and changing contemporary exhibitions. Turn Sideways in the Wind, an honest and direct display reminding us that life is rarely straightforward, is a perfect example of what the museum excels at bringing to the people of the North West.

The majority of people who identify as Romani live in continental Europe. But there’s also a growing population in Greater Manchester. Journalist and photographer Ciara Leeming has been observing and talking with the local Roma community for the last few years. Now she presents candid photographs of three everyday lives.

Leeming says: “Lots of people have preconceptions about the Roma and who they are. In the newspapers and the media we see stories about beggars and gypsy weddings and there have been some negative things written. It tends to be quite sensationalist. You don’t get to hear from the people themselves, so it’s important that their voice gets to be in [the exhibition].”

This is an exhibition in a museum. But don’t think you’re in for a traditional museum voice here. Visitors aren’t presented with dry, academic text describing the photographs. Instead, the accompanying panels are written in the subjects’ own words, displayed in English Czech and Romani. And it is in these words that the powerful stories of the three lives emerge – issues around economic hardship, coming out as gay, and religious conversion, all while trying to build new lives in a foreign country. 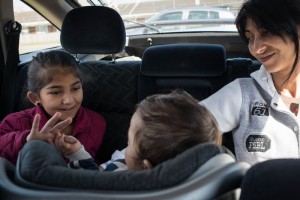 The photographs are part of a larger piece of work looking at Roma lives in the UK. Leeming’s Roma Project has already been the subject of other exhibitions and there’s also a book.

Given her background as a print journalist, Leeming is well-placed to document these stories. In recent years she’s not only befriended many in Manchester’s Roma community and learned their life stories, but also documented them in these simple, yet powerful, images.

She says: “Photography is a means of journalism. It’s another tool you can use to show different things. It’s also another way of getting into people’s lives. It’s all to do with your confidence in holding a camera.”

However, you can’t just walk into people’s homes and start taking photographs of people, especially not of a small community like the Roma.

“When you’re working with gypsy and traveller communities there are some quite sensitive subjects and the words you use. You have to use your journalism skills when you approach a community and work with them. It’s to do with being friends with people and building those relationships up over years.”

The photographs she presents are from people’s everyday lives, taken in their homes or as they go about their everyday business. They’re natural and certainly seem to capture people honestly. There are some portrait-style pictures in there, but Leeming says they’re not set up in any way.

“I spend a lot of time with my camera over my shoulder, watching, talking and waiting. Sometimes if someone was already sitting in a good position I might ask them to pause a moment while I take a photograph, but it’s not a staged picture.”

There has been a trend in recent years for photography in museums to be presented as pieces of art. It’s refreshing to see that this is not presented as an art exhibition. For Leeming, this is an opportunity to share the stories of the people she’s met..

“This is a very excluded community on a whole host of levels” she reflects. “I hope this will be an opportunity for visitors to learn something about one of Manchester’s newest minority groups, and for Roma visitors to see members of their communities being represented in a positive way.” 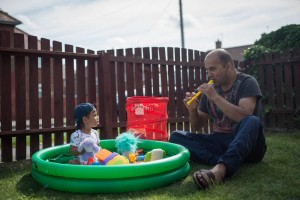 The three young people whose stories are being featured – Ramona, Lida and Lubos – are among those who have moved here since the European Union expanded in 2004 and 2007. The background to this migration is complex but the aftermath of Communism hit Roma minorities hard. Poverty, combined with institutional racism and a rise in far right anti-Gypsy politics, pushed some to take their chances abroad.

Like other urban areas, Greater Manchester has attracted sizeable communities of Roma. Salford is home to many from the Czech Republic and Slovakia in particular, while parts of Manchester are popular with Roma from Romania and Bolton has a community of Hungarian Roma.

After taking her photographs, Leeming takes them back to the community and asks people to talk to her about what they see. That way she’s building up a deeper understanding of their lives. Many of the skills she’s using come from the world of journalism but are also lifted – intentionally or not – from anthropological practice. She’s doing what participant observers have been doing for years.

Maybe this is a new form of ethnography? Leeming isn’t a social scientist and this isn’t an anthropological study in a traditional sense. Instead she’s used her journalistic skills of finding a story, immersing herself in it and building up a picture before editing down what she’s going to present to the world. The result is an exhibition which presents the honest and naked reality of life in a clear and simple way.

Other museums could think about working with journalists when it comes to presenting ethnographic material to the public.