In a new series called Sounds Northern, Paul Davies shines a spotlight on Northern musicians and bands to watch out for. This week it’s Team Picture from Leeds.

Leeds six-piece Team Picture have had a busy few months. In May they performed at Liverpool Sound City, Newcastle’s Hit the North and Salford’s Sounds from the Other City, all in the space of just over 24 hours. Their mini album, Recital, has just come out and is literally a release of two sides taking into account their versatility and mixed influences.

“We really resonate with the sincerity of pop music from the 70s and 80s, and the ability of so many bands from this period to transcend genre and remain influential,” says guitarist, Josh. “We wanted to celebrate that.” 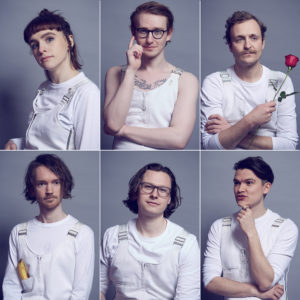 The songs on the first half have a slight 80s film soundtrack feel with light and dark synth textures. The guitar intro to (I Have a) Little Secret conjures images of how Bette Davis Eyes might have sounded on The Smiths’ debut album.

As well as mixing up the sounds, swapping vocalists across their songs is another feature which keeps things fresh. “I love bands like Deerhunter, or Grizzly Bear, those that just switch vocalists for a bunch of songs and it’s no big deal,” says Josh.

The twin male/female lead on Strange Year recalls Arcade Fire. Meanwhile, when Thom takes a turn on vocals on Weird Movements, his voice evokes the sensitive vibrato spirit of Wild Beasts. Hannah’s solo vocals on Theme from Flint rounds off the first half and add another dimension to their universe, providing more dream to an already hazy cosmic drive.

The second half kicks off with (I want your) Life Hack which the band describes as “a Talking Heads song from an alternate dimension”. It certainly has the air of a classic single from the late 70s. The grinding, moaning guitars lead to a rip-roaring chorus which takes its inspiration from those pronounced, shouty male/female interchanges of The B-52s or Talking Heads. 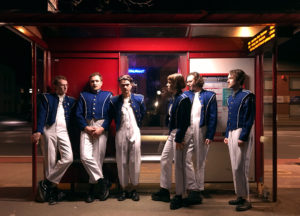 While guitars dominate the second half, it’s the synths that provide personality. The fuzzy blues of Break Yr Heart and whining guitar of Love Irritant are broken up by sporadic synth atmospherics which give you that much needed pinch to bring you back into the world of Team Picture.

There’s an envious, almost nerdy attention to detail in sound and while all of these mixed ingredients may seem like too much for the palate, Recital is never overcooked and the many ideas and changes actually mean that it’s moreish enough to go right back and tuck in again.