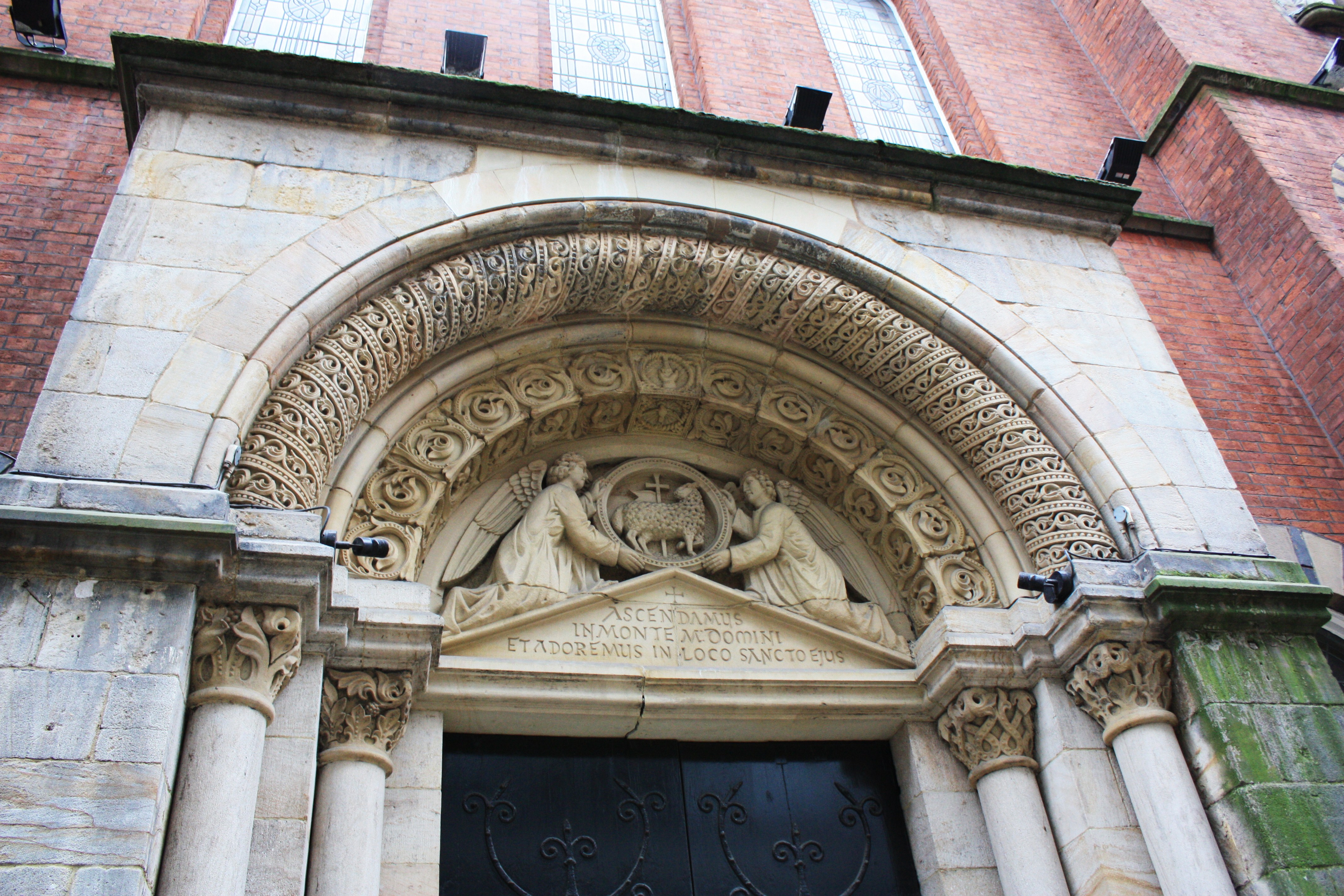 If you are lucky enough to have visited Rome, you will no doubt have remarked upon the number and beauty of its churches, many of which present themselves as objects of chance discovery in the city’s charismatic streets. With their strong aesthetic appeal, they are reminiscent of gems set in a larger ornament. Far away from Rome, the northern English city of Manchester can’t compete with the eternal city’s Christian heritage; but it does have St. Mary’s – known locally as ‘The Hidden Gem’ – Manchester’s very own concealed Roman church.

The comparison with Rome is apt, for this lovely church – the Catholic Mother Church of Greater Manchester – is not easy to find, being hidden away on Mulberry Street between John Dalton Street and Lincoln Square. Churches often act as landmarks, of course, but St. Mary’s – quite an old edifice in Mancunian terms – has over time become obscured from view by larger, less elegant structures. Taking the time to find it, though, is effort well-rewarded and the closest you’re likely to come in Manchester to the Roman urban experience.

St. Mary’s opened in 1794 on land purchased by Father Rowland Broomhead, with the purpose of serving a particularly deprived area of the city that once existed between Albert Square and Deansgate. In 1835, however, the church closed after the dome and part of the roof collapsed. It was rebuilt in 1844 according to the plans of architect Richard Lane (who also designed Salford Town Hall and the Friends Meeting House), and was formally reopened in 1848.

At first sight, you’d be forgiven for thinking St. Mary’s looks rather ordinary and lacking in grandeur: but for the tower, set with a statue of Our Lady of Manchester, the plain, red brick façade and adjoining presbytery give the appearance of a well-kept Victorian town house rather than a notable church.

A clue to the extraordinary is provided by the entrance, a beautifully carved, rounded stone arch bearing compounded Old Testament verse above the lintel, inscribed in Latin: ASCENDAMUS IN MOMTEM DOMINI ET ADOREMUS IN LOCO SANCTO EIUS (“Come, let us go up to the mountain of the Lord (Isaiah 2:3) (and) Praise Him in His Holy places”) (Psalm 150:1)). Crowning the inscription, two angels present a medallion of the Lamb of God (Agnus Dei). Despite this ornateness, not even the most prescient first-time visitor could anticipate the remarkable interior that awaits.

Once inside, the reason for the accolade ‘gem’ becomes apparent for St. Mary’s is a remarkably beautiful space that seems to sparkle on account of its fine state of preservation and its welcoming brightness. Its small dimensions render it compact and intimate, yet it is also an open and rather grand space due to the exceptional light, unexpected height and magnificent ecclesiastical décor. Of particular note are the gorgeous cream and yellow trompe l’oeil ‘marble’ columns which divide the nave and aisles, and a stunning Caen stone reredos surmounting the high altar, with life-size carvings of Our Lady, St. Stephen, St. Patrick, St. Peter, St. John, St. Hilda, St. Augustine and St. Joseph. This exquisite focal point was carved by another Mr Lane of Preston in 1869. In addition, St. Mary’s possesses some exemplary stained glass windows – both subtle in design and arresting in colour – and an ornate, medieval font dating from the 14th century, which stands in front of the Shrine of Our Lady of Manchester. 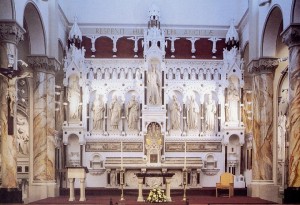 Aside from these traditional fixtures, an extraordinary set of expressionist artworks adorn both aisle walls. Painted by Norman Adams RA, they were commissioned by the church in 1994 and are known collectively as ‘The Adams Stations’. They are 14 thematically related works, reminiscent of a mural. Each painting represents a stage of the devotion known as ‘The Stations of the Cross’, which calls upon believers to meditate on fourteen stops or stations, beginning with Christ’s condemnation and ending with his death. They are very powerful, emotive works of art, breathtaking in scope and execution, colour and religious intensity.

This little church really is a gem; sitting in its beautiful interior is a pleasure worthy of anybody’s time.