It’s not every restaurant that puts you in mind of Cartesian dualism – that’s to say, René Descartes’ theory which argues that the mind and the brain are fundamentally separate and diametrically opposed. But then, Urban Cookhouse is a bit on the unusual side.

It’s located on Princess Street in Manchester city centre, more often a destination for those heading to Canal Street, a casino or the bus station than for fine dining. Inside – and this is where Descartes comes in – it looks very odd indeed. It’s a collision of neon signage, leaded glass panels, exposed pipework, silver-sprayed chairs and corrugated steel walls, which wouldn’t look out of place on a shed. It’s a big old place and, despite assorted cushions and sofas, it’s not what you’d call cosy. The acoustics aren’t great, either. Northern Soul visited on a quiet weeknight, but fears for the eardrums of diners on a busy Saturday. The colour scheme is heavy on the black and purple, as though you’re dining inside a pack of Blackcurrant & Liquorice. In short, it’s pretty batty. 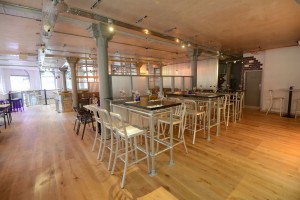 The food, though, is terrific. Like, genuinely, unexpectedly great. So possibly the rum try-hard décor is all a ruse to bewilder customers into expecting something below par, only to deliver something wonderful instead. The fusion-minded menu leans heavily on urban American cuisine, all corn dog this, jerk that and po boy the other. There’s even a (very agreeable) option of popcorn as a side dish, with four flavours to choose from. But it certainly doesn’t lack variety – vegetarian options are pretty decent, and there are Asian, Italian and Indian elements in the mix, too. Plus, there’s lots of that, fashionable ‘foam’ stuff cropping up on several dishes. Somewhere up there, Tony Hancock is looking down and muttering “But I don’t want froth!”

The starters are subtle yet substantial. The mushroom parfait with brûléed pear chutney and chargrilled rye bread is seriously tasty, though it’s a lot of parfait and not quite enough bread.

The halloumi stack with basil pesto and garlic croutons is a treat too, a balanced mix of flavours which resist overwhelming each other.

After a swift nibble on the cinnamon popcorn, we plough on into the mains. The grilled sea bream with coconut rice, tom yum sauce, lime foam and a crab spring roll is really quite special: a masterful blend of well-chosen, beautifully-cooked elements, with the crab spring roll adding a fresh, spicy note to the dish. And yes, OK, the foam works well. Elsewhere, the sirloin steak with peppercorn sauce, baby onion rings, grilled tomato and mushrooms and chunky chips does the trick too. Not an option that can go too far wrong, perhaps, but it’s very flavoursome and winningly presented. The rich succulent steak is something to savour and it’s altogether a very classy take on a familiar dish. 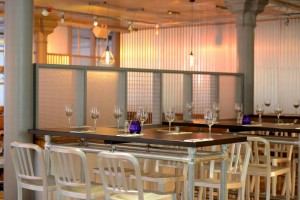 After all that, the desserts menu is a slightly imposing prospect. But there’s no resisting the caramel trio option – honeycomb crème brulee, liquid popcorn and ras el hanout caramel shards. It’s basically a sugar rush on a plate, as you’d expect, but a pretty delightful experience, nevertheless.

It’s maybe not be a particularly cheap dining option, but it seems very reasonable for what you’re getting. Nobody’s exactly reinventing world cuisine here, but it’s done with evident skill and flair. Despite the deeply curious setting, then, the sheer quality of the food at Urban Cookhouse wins the day. Yeah – so take that, Descartes. 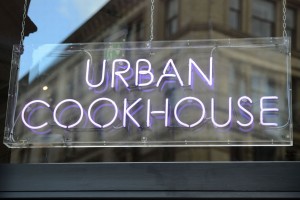