A Room with a Stew: Stewart Lee at The Lowry

Caleb Everett May 23, 2015 Arts, Theatre Comments Off on A Room with a Stew: Stewart Lee at The Lowry

Racing backwards through life I can pepper any experience with anxiety. It’s a perpetually irritating talent that never fails to amuse.

My friend Gerry tries to calm me down and reassures me that the tram will ease into Salford with plenty of time to view the unrecognisable landscape before Stewart Lee is on stage. I don’t relax. Instead I fix my gaze on a passenger – an elderly Yootha Joyce look-a-like who clearly shooed reality out of her wig long ago. Sagging boobs pressed against the tram window (mine, not hers), we’re stationary outside Cornbrook for seven minutes and I wilt like a wet sock. Still, we arrive with ten minutes to spare. Gerry nods his silvery knowing nod and we take in the Salford air, now imported directly from Kensington.

We shuffle into The Lowry, social socialist butterflies in full-poverty bloom, and take our seats. This is how the other half live – simply doing something on a Saturday evening. Stewart Lee’s audience is a real Shirley-Bertie-Basset mixed bag and we’re seated by some hipster types hiding copies of The Guardian in their beards, and some Egyptian mummies in M&S cardigans left behind from Michael Flatley’s Lord of the Dance. This is hardly a criticism – Gerry and I will be Kenneth Williams and Charles Hawtrey messes with a quart of bon bons by intermission. 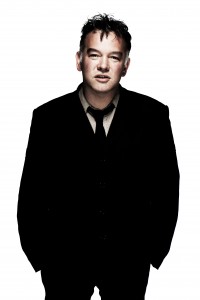 At eight o’clock Stewart Lee walks on stage. He takes in the audience, scanning the whites of our eyes before his self-interrogation and remarks “the vegetarian restaurants of Salford must be quiet tonight”. Gone is the quiff, replaced by a handsome tousled boyish do. It’s high drama and low hair this time around as the man who could think himself to death starts by shattering the barrier between artiste and audience. He tells us that this is very much a “work-in-progress show”, preparing material for the fourth series of Stewart Lee’s Comedy Vehicle. We’ll be treated to a half hour set about Islamophobia (“to get the Daily Mail off my back”) and another half hour about urine before the intermission. Then back for a half hour set about nationalism and a “disappointing encore” (written earlier in the week) about money.

Assuring us he isn’t a comedian who interacts (thankfully for those quivering with nothing to say), he slaps the audience on the autopsy table by instantly dividing us into two separate bubbling vats of laughter. One half of the audience, Lee claims, will get the jokes (“sometimes before the punchline”) while the other half have been dragged by friends and shall be bored to their bowels after five minutes. It’s something of a Stewart Lee trademark to analyse and divide the audience in this manner. In the past some woefully dull critics have mistaken this for sincere contempt rather than a well written smug comedic stage character. This is a seasoned performer at his very best. Doing something that very few do, and fewer still do anywhere near as well as he – airing the unfinished canvas. The menu is being shaped before you and the mind of the writer on stage (rarely corpsing the performer on stage) is constantly scribbling away.

The first half hour, about Islamophobia, has been touched upon in a previous tour, as was his satirical attempt at “Islamic observational comedy” which comes complete with a hilarious Michael McIntyre sprint. It’s a genius piece that’ll have the original-as-wheelie-bin comics searching for industrial-strength glue to keep them on one spot during a performance.

Lee’s stage presence is theatrical without being showy. The voice rarely edges higher than an octave lower than boredom yet it enthrals. Stage-wise it’s all very simple. No garish lights spelling out his own name. The stage belongs to the language which is spectacle enough; a spectacle ignored by a lot of modern comics who open their mouths and out pours the sound of the ocean.

The second half hour, about urine, was my favourite set of the evening. Not a sentence I expect to write again. It’s high theatre. Without giving the content away, it’s Lee’s Banshee breakdown that had most of The Lowry roaring with laughter. Enough to drown out the awkward shuffling of arses-on-seats from those unfamiliar with the nervous energy of Lee’s work. 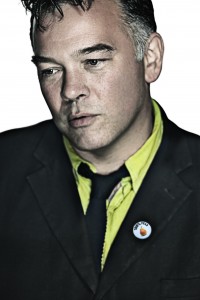 During the intermission Gerry and I venture outside in nicotine camaraderie. Within four puffs of an Embassy Number One we’ve both mentioned Tony Hancock in relation to Stewart Lee. Both obsessively taking apart then reassembling a joke until it turns to dust or glitter and taking on a level of analysis that would kill a beginner. In Hancock’s case, of course, it did.

The second half of the show opens with a surreal narrative on English Nationalism. In the age of tweet-sized entertainment, a 30-minute blitz involving Ukip, an England flag and cat shit is rather refreshing. Lee is at his acerbic best here, throwing a confetti of critiques at Paul Nuttall, Nigel Farage and even squeezing in Russell Brand (“not voting worked out, didn’t it?”)

The encore, while not nearly as sturdy as the previous three sets, is perhaps the most compelling because it isn’t meant to be. Here we see Stewart Lee trying out his newest material, even taking cues from biro etchings on his hand. During the outro Lee quips that “nobody is equipped to review me”. He’s right too. All I can do is suggest that you go and see this show while it’s evolving. It’s more enjoyable than stealing KitKats before having drunken sex on a Ferris Wheel.

Stewart Lee’s A Room With A Stew is on tour for, pretty much, the whole year

The Stinky Chef: Ceci Fritti (fried, spiced chickpeas) What did the Romans ever do for us? Here’s a (proper yummy) recipe typical of the Romans from our local recipe whizz, The Stinky Chef. northernsoul.me.uk/the-stinky… pic.twitter.com/y88COYIWX0

The Stinky Chef: Ceci Fritti (fried, spiced chickpeas) What did the Romans ever do for us? Here’s a recipe typical to the Romans from our local @TheStinkyChef northernsoul.me.uk/the-stinky… #recipe pic.twitter.com/RJwADEfsnC