Those of us who have been in Manchester for many a year wistfully remember the restaurant Reform, one of the city’s leading eateries until its closure in 2003. Sadly, the venue has since lurched from one incarnation to another until Living Ventures, the kingpins of Manchester’s food scene who brought us Australasia, Artisan and Manchester House, snapped it up in 2015. 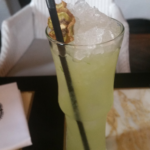 Lo and behold Grand Pacific was born and what a fantastic place it is. I was lucky enough to rub shoulders with the glamorous ones at the opening night earlier this year, and the once dark and moody room had been transformed into a beautiful ode to Raffles in Singapore, complete with a huge bar and airy restaurant area. I was desperate to get back and give the menu a whirl.

The colonial vibe surrounding diners blends neatly with the gastronomic choices on offer, so with a Kiwi Blanc cocktail (a blend of wine, Cointreau and kiwi syrup) in hand, my friend and I investigated further. 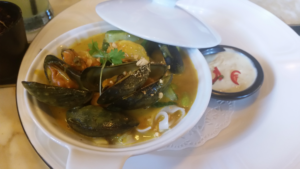 Waiting for us was a tough choice. There were so many options that made our mouths water but, after much negotiation, we narrowed it down to sharing pork balls with a harumaki dipping sauce and a prawn and mussel laksa. 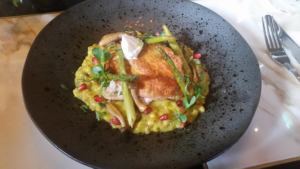 Thanks to a combination of being hungry and the fantastic smells coming from other tables, we were more than ready when our waitress appeared. Both starters were delicious; the pork balls were tasty and exactly what you’d expect, and the laksa was just the right side of spicy to keep our palates ready for the next course.

The main course, I’m afraid, was a game of two halves, which I won. I wouldn’t say I’m a competitive person but I do like to win the food envy match when having a slap-up meal. I ordered the chicken supreme and it was a winner. Fantastically cooked chicken served on saffron pearl barley and topped with wasabi crème fraiche – it was a taste sensation. My friend, on the other hand, ordered tempura Szechuan sea bass and I’m afraid it came across as a little bland. The fish was more tempura and less Szechuan which would have been fine if it had come on top of something more decisive than crispy noodles. 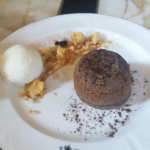 For dessert, we were full so opted to share again. Why do you feel like you’re being good having half a dessert when you could probably survive with none? However, in the interests of a balanced review I pushed on and was rewarded big time with a warm chocolate fondant complete with ice cream, honeycomb pieces and salted caramel sauce.

The staff at Grand Pacific are attentive and friendly (which is more than could be said of their predecessors at Reform) and the tempo of the meal is perfect. I have an issue with paying £40+ for a meal and being out in less than an hour. I was served a cocktail and three courses at Manchester’s Room in 40 minutes a few years ago, and yes, I’m still scarred. But we were not rushed at Grand Pacific and spent a good 90 minutes enjoying the scenery. 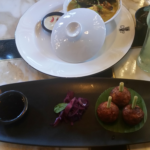 I’ll admit to being a Living Ventures fan before going for this meal and I definitely remain one having visited Grand Pacific. It ticked every box for a really lovely meal on a summer’s evening in my wonderful city, even if I rolled home down King Street a tad uncomfortable but content.