Theatre Review: Love from a Stranger, The Lowry

Rachael Richards July 12, 2018 Arts, Theatre Comments Off on Theatre Review: Love from a Stranger, The Lowry

A jilted ex-fiancé, an interfering hammy aunt, a considerable sum of money, a staid office girl and a charming American – the classic elements of any Agatha Christie storyline and all are featured in this murderous drama.

Adapted by director Lucy Bailey, the audience is transported from the 30s to the 50s. Tweed suits, mentions of tea at Fortnum’s and expressions of “darhling” are peppered throughout.

The play’s first half opens slowly. Cecily is desperate to break free from her sensible existence in London. After winning £25,000 in a sweepstake she believes her dreams of adventure have come true. Bruce, the charming stranger with Andy Warhol hair, sweeps her off her feet and she abandons her fiancé and moves to a remote county cottage with her new beau. 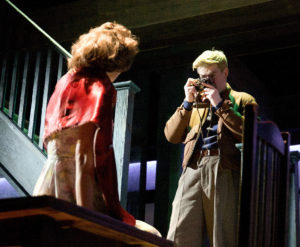 Mike Britton’s staging is suitably atmospheric. The set moves in time with the action from Cecily’s smart Bayswater apartment to focus on Bruce’s voyeuristic tenancies in the corridor. Throughout the staging is suitably creepy as it builds up the tension and conveys Bruce’s menacing presence. There’s a real sense of foreboding as Bruce clicks away with his camera, which is increased by Richard Hamilton’s doom-inducing sounds and a distinct echo of Peeping Tom, the 60s British horror flick.

As the second half moves to the country the pace slows, and Cecily and Bruce’s relationship becomes increasing fraught. He’s a controlling man who objects to visitors. After Hodgson the well-meaning gardener finds buried bottles of peroxide in the garden and disputes the price of the cottage, Cecily becomes increasing concerned for her life. Red lights flash on stage and appear like blood dripping down the wall. Who is this stranger, with his love of photography and interest in serial killers?

As the raunchiness increases on stage, and the sniggers among the audience rise, Cecily confronts her lover. However, this being an Agatha Christie plot, nothing is that simple, there’s always a ghastly twist. As Christie said herself, “any woman can fool a man if she wants to and if he’s in love with her”.

The dramatic build-up and big reveal disappoint as much as day-old cake at The Savoy. This is where the play falls down. At the very moment the truth is disclosed,Helen Bradbury’s acting strikes the wrong note and the imposing music is silenced, leaving the audience feeling flat. 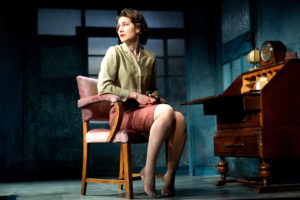 As a chilling psychological thriller, Love From A Stranger didn’t work. It lacked the blood-curdling fear and unsettling atmosphere you expect when presented with a psychopath. The script would have benefited from a good edit as the opening half spent too long setting the scene and the second half needed sharpening up.

The play was terribly, terribly good at conveying the stuffy 1950s but the spiteful twist which made Christie ‘the queen of crime’ was missing. Looks like I’ll have to get my fright fix from a Sunday special of Miss Marple. 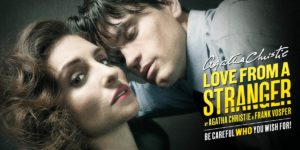 Agatha Christie’s Love From A Stranger is on at The Lowry until July 14, 2018. For more information, please click here.