It’s difficult to recall a time when Lulu wasn’t around. Aged just 15 when she had her first hit in 1964, she has been a fixture of the entertainment business ever since. Forget Six Degrees of Kevin Bacon where you can link the actor to anyone in the business in six moves, you can do it in two with Lulu. From Bowie, The Beatles and Hendrix to Morecambe & Wise, Brucie and Basil Brush, she’s worked with all of them.

Lulu is like a musical lighthouse. “Ooh, I love that description,” she laughs. Some 55 years after her chart debut, Lulu is still going strong. After guesting on Take That’s arena tour, she’s making Summer festival appearances before embarking on her own 35-date On Fire tour of the UK this Autumn.

As bubbly and enthusiastic as you’d expect, my fellow Scot Lulu immediately picks up on my accent. For clarity, I’ve had to slow it down a little since living south of the border, an issue Lulu knows all about. “I certainly do. When I first went down to London, no-one understood a single word I said to start with because I had a very thick Scottish accent. You never lose it and I’d never want to, but I had to tone it down when I started to avoid any misunderstanding.”

With a diary full of live shows this year, it’s clear that the Glaswegian songstress has no desire to slow down. “That’s the intention. Performing is what I absolutely love to do but you never know if it’s going to last, so I know I’m one of the lucky people. I don’t know why some people last longer than others, but I’ve always had a strong will and I like hard work.”

She continues: “I’m extremely vigilant and disciplined because I would love to continue singing and performing for as long as I can. I also have resilience, so when I get knocked down, I get up again.”

Bounce-back ability seems key to pop survival. From the outside, the public only sees the glamour and success that show business can bring but, in reality, the music industry is no easy ride.

“It certainly isn’t,” Lulu agrees. “You have to be resilient and develop an inner strength, but it’s hard for anybody especially if you’re a sensitive soul. For those who can brush things off, it’s enviable. I have cultivated that, but it doesn’t come naturally. I still think, ‘oh, they don’t like me’ and ‘why did that not work?’, but I’ve learned to think that there must be a reason and I can either fix it or move on.

“You also have to know when to back off but that comes with age. Also, never take yourself too seriously because that will kill you. I’ve done a lot of hard work on myself reading and studying which has been key.”

Some of the hits will undoubtedly make an appearance in the Autumn tour but looking ahead is clearly more important to Lulu than any nostalgia trip. Her last album, Making Life Rhyme, featured new, self-penned material and, in 2018, she returned to the West End stage playing Dorothy Brock in 42nd Street. Perhaps she’s still waiting to be discovered? “You’ve absolutely got me. In fact, I once said that the epitaph on my headstone should read ‘still waiting to be discovered’. I’ve learned a lot of things along the way and I’m still learning but I’m always looking to see what’s next while still trying to live in the day. That’s a challenge in itself.”

Many artists are indelibly linked to their first big hit and none more so than Lulu with Shout! That track reached the UK top ten twice. I wonder if she ever felt that this hit cast a shadow over the other material she recorded over years?

“That song did so, so much for me and I’m eternally grateful for it. But I’ve absolutely been there and done that and I sometimes wonder if people think I can only do one thing. The reaction also depends on where I am. In America, many think I can only do To Sir With Love and over here it’s Shout!. I mean not always, but on the whole. Mind you, because of Ab Fab, when I’m walking down Madison Avenue it’s always, ‘Champagne for Lulu’.” 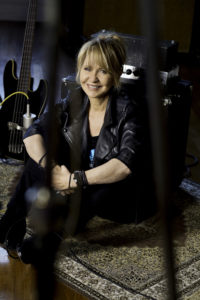 Backed by her band, Lulu’s On Fire tour will feature a huge LED screen showing carefully selected personal and career-defining moments from her life in music. Songwriting has become a big part of her career despite not exploring this talent until the early 1990s. As well co-penning the Tina Turner hit I Don’t Wanna Fight, one of her best-loved compositions is fan-favourite Where The Poor Boys Dance. It’s also a favourite of mine and Lulu has a theory why the hit particularly resonates back home.

“It’s not just exclusive to us, but I think if you’re Scottish, you really understand it. That song is very close to my heart. It’s about missing the past, looking back and being sentimental. I don’t think I’ll ever get over the death of my parents. I have to just accept it but it’s always there.”

She adds: “It’s the same with all heartache, but that’s the making of you and what gives you character. It makes you a better person because you become more vulnerable and more grateful for what you’ve got. You can have everything, but you still have to have some heartache. It’s just having some kind of acceptance of the way things are sometimes. You also have to look at how lucky you are. That’s the key to life.”

If anyone has earned the right to have the odd diva demand it’s Lulu, so it will be to the disappointment of many that she doesn’t expect every dressing room to be freshly decorated or peeled grapes to be available at the click of a finger.

She laughs. “I do like seedless grapes, but my rider is nothing, just bottled water. I also love coconut milk, a good cup of coffee and a Danish never goes wrong either. I’m very self-sufficient and carry everything that I need for myself. Another important thing is learning how to delegate. It’s not so much about being a diva or being really demanding it’s just that if you’re a perfectionist you’re tough on yourself as much as anybody else. The people who work with me, get me and realise we’re all after the same outcome. Of course, I also laugh at myself. When you get to my age you really have to be able to laugh at the idiosyncrasies.” 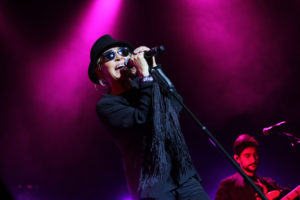 Speaking of the ‘A’ word, Lulu celebrated her 70th birthday last year. For female performers in particular, age is something that is constantly referred to. I have never understood what any specific age is ‘supposed’ to be. We are who we are, and the number is just that, a number. It’s clear that Lulu shares this opinion.

“It’s more about attitude. Age is a privilege but rather than ask your age, it’s better to ask, ‘are you a member of the Can-Do Club?’ My friend was fashion editor of GQ for many years and a perfectionist. She titled me ‘Director General of the Can-Do Club’. If you no can do, I won’t work with you. I love to work with people who, even if they haven’t been able to achieve something, gave it a really good shot. That’s all you can ask of someone. I’m always really thrilled when someone gives something a chance even if it doesn’t work out.”

One area that can be diminished by age is vocal ability. To sustain a career in music and maintain a certain standard, it’s obvious that Lulu puts a lot of work into looking after her vocal cords. “You have to be disciplined and do vocal warm-ups. If you’re going to do a job well, you have to put the work in if you’re going to last. Working with Take That on their tour, I noticed that the boys now do more vocal warm-ups and also eat well. When you’re young it doesn’t matter and you can just brush it off but, as you get older and more mature, you need to learn that it takes longer to warm the voice and the body up. Everything takes longer.” 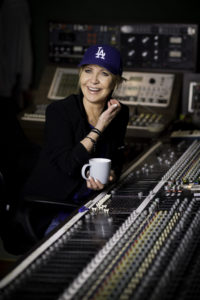 Tell me about it. At least one trip to the loo in the middle of the night is par for the course these days. Lulu even has the solution for that. “It’s all about the perineum darling. I learned that in pilates. The teacher I went to was with the Rambert Ballet and was always saying, ‘darling, pull up in the perineum, pull up in the perineum’. If you pull all that up, it won’t drop down and you won’t be running to the toilet so much when you get older.”

I’m thinking of having my perineum laminated. “Ha, I love it,” she squeals with laughter. “That could be painful though.”

As well as music, the other big joy in Lulu’s life is being a grandmother. The veteran star is less concerned about finding new romance in her life. “I don’t envisage it happening, but if it did it would be fine. I don’t feel I need that, though, and I’m kind of set in my ways. I used to think that the way to be happy was to be attached to a man and that if I was married to some fabulous, gorgeous guy then I’d be sorted. That’s a lot of responsibility to lay on a person. If I was to be with someone now, I think they would have to have their own house to be honest with you.”

A new love is entering Lulu’s life, however. “I’m getting a Cockapoo. A friend of mine has one and I showed my granddaughter a picture and she said that I had to have one. I lost my beloved Westie in January and was adamant that it was too sad and painful at the end to go through that again, but now I’ve got a new dog coming.”