When you check into a hotel in Manchester and they tell you their bar is themed around local history, you can imagine the usual suspects: cotton, trains, bees, football, the Haçienda.

So when I heard that the Doubletree Hilton next to Manchester Piccadilly station had refitted its bar in a manner “inspired by the heritage of its location” my expectations were initially quite low. Quaint, rehearsed and sterile historical themes, I imagined, perfect for the clientele.

Instead, they have turned to a couple of local, almost unknown, stories for inspiration. And two of the cocktails on their new drinks menu are based on stories of less than savoury characters.

Roger Aytoun – who lent his name to Aytoun Street situated behind the hotel – was an 18th century dandy. Some 6’4” and handsome, he often sported a full red military uniform even though he wasn’t in the army. But he looked the part. And it was thanks to his good looks and charm that he managed to impress and marry Mrs Barbara Minshull, a wealthy woman many years his senior. 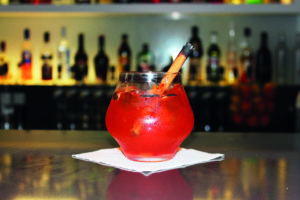 While squandering her fortune on wine and women, he also started putting together his own volunteer army regiment. One of Aytoun’s recruitment methods was brawling in pubs. If the fight was won the loser had to join his regiment. It’s from this that Aytoun gained the nickname ‘Spanking Roger’ – also a great name for a fresh take on a Bloody Mary, packed with herbs and plenty of spice.

In a pub a few doors down from the Hilton, there was once a celebrity dog called Teddy Wells. This Manchester Terrier sported a sharp little cap secured under his jaw and would sit on a stool at the end of the bar, sipping beer from an ashtray. Cute.

But his fame came from his exploits as a champion ‘ratter’. In a time before the RSPCA, a sack of live rats would be released into the pub yard and bets taken on how long it would take a dog to kill the lot. In the 1890s, Teddy Wells killed 30 rats in 26.5 seconds, which was deemed a national record. Not so cute now, eh?

Today he’s remembered in a cocktail packed with ginger, cinnamon and whisky. A drink with as much snap as Teddy’s killer jaw.

I wonder what international tourists supping a welcome drink in Store Street Craft Bar will think of the city they’ve just arrived in when they hear stories of the pub fights that inspired their cocktails?

We’re proud of our varied heritage in Manchester. And to this day we’re a feisty bunch, especially after a drink.