Life is a cabaret. Or is it? Cabaret Voltaire, Hope Mill Theatre Café, Manchester

Drew Tosh January 30, 2017 Arts, Theatre Comments Off on Life is a cabaret. Or is it? Cabaret Voltaire, Hope Mill Theatre Café, Manchester

Cabaret Voltaire 101 is a new group celebrating Dadaism more than 100 years after its inception.

From Wednesday to Friday this week, the café bar at Hope Mill Theatre in Manchester’s Ancoats will be buzzing as CV101 mentor and showcase new talent including art, song, dance and radical thought. Via stand-up, monologues and physical theatre, performers will follow the anarchic Dada method of using art to explore the big issues of the day.

In 1916, the Dadaists stated that “it is not Dada that is non-sense, but the essence of our age that is non-sense” – a way of thinking that couldn’t seem more relevant given today’s political climate.

Cabaret Voltaire was originally a nightclub in Zurich where performances merged the artistic and political, mirroring the maelstrom of the First World War. Often chaotic and brutal, the cabaret was the birthplace of the Dadaist movement. 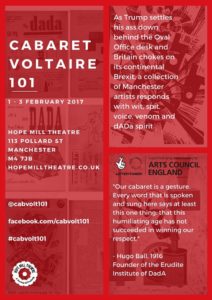 In 2017, CV101 has no shortage of world affairs on which to comment. From Brexit and Trump, to social media and the cult of celebrity, the cabaret pulls no punches. I’m hoping they cover the music scene and do a Lady Gaga Dada, but that’s just me. 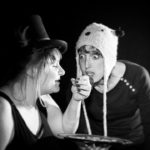 CV101 will present a new one-woman show, written and directed by Prestwich-based Collette Murray, and performed by Helen O’Hara. The piece explores the life and work of Emmy Hennings, one of the first female performers at the original Cabaret Voltaire.

Murray says: “Now is a time more than ever that we need to have our voices heard, make our physical presence known and be in each other’s physical company to share in the delight of joy and daring.”

Expect political poets, clowns commenting on the current climate, a sketch about a cow and a goat and, of course, someone having a bash at Brecht.

If you want to celebrate the wonders of the world through art, or feel the need to shout loudly and clearly about the corrupt and unjust, then you know where to go.