Marissa Burgess January 30, 2017 Arts, Comedy Comments Off on What’s on in February: Comedy in Manchester

It is thought that the priest St Valentine was martyred during Roman times due to his marrying Christian couples (to each other, that is). However, it’s little known that it was actually because his stand-up was so bad. Get down to these comedy love-ins this February.

As ever the Store puts on a fine line-up of shows each weekend but in addition there’s the amateur night King Gong on Sun 5th, a Valentine’s stand-up special on 14th and comedians trying out New Stuff on Sundays 12th and 26th.

Plus there’s a very special event on Sun 19th – Comic Relief Live (£15, £13.50 conc) where John Bishop will present a line-up of new-ish, but very promising talent (or at least non-telly names) in the form of Jamali Maddix, Kieran Hodgson, Lauren Pattison, Liam Williams and Lloyd Griffith. All proceeds to Red Nose Day of course.

Frog and Bucket, from Thursday

Plenty going on at the Frog this month in addition to the weekend shows and Monday new act at Beat the Frog. Wed 8th sees a fundraiser night for children’s charity Wood St Mission, there’s a special evening of stand-up for Valentine’s Day on the 14th (of course), Work in Progress night is on Wed 15th and there’s a special new residency for Leeds improv group Discount Comedy Checkout on the 19th.

On the 22nd Chris Brooker performs a solo show then on 26th there’s a live appearance for radio show The Gay Agenda in the afternoon followed by Laughing Cows all female line-up with Kiri Pritchard McLean introducing Kate McCabe, Toots & Leigh and Kate Smurthwaite in the evening. The month rounds off with the magnificent John Robertson and his freaky, interactive Dark Room show – go and check it out.

Another great line-up from the GT guys. With award-winning and acclaimed stand-up and author Mark Watson, off the wall Canadian Bobby Mair and writer and director Garrett Millerick.

Comedy at The Lowry, Sun 5 Feb

Hang on a minute, there are three spaces at The Lowry but there are four comedy comedy shows billed for today? Kicking off the action in the Quays theatre in the afternoon is former school inspector Gervase Phinn (£16 – £18.50) with tales of the job – go, he’s a funny fella, my mum likes him. The Quays in the evening plays host to the fabulously skilled Stephen K Amos (£19). Meanwhile in the big room, Miles Jupp (£20) attempts to make sense of the world in Songs of Freedom and starting out in the lovely studio space is the rising star and BBC New Comedy Award winner Steve Bugeja £10-£12.

This month Lettuce ramps it up a gear with four gigs in Manchester. There’s a star of Channel 4’s Cucumber Bethany Black at Kro Bar on Mon 6th, charmer Pete Otway is at Brooklands Tap on Thu 9th, cheeky Geordie Barry Dodds at The Bowling Green in Chorlton on Fri 10th and there’s musical comedy of contrasting types from Steve Shanyaski and Vince Atta at The Slug and Lettuce, Didsbury on Fri 24th.

‘Britain’s only orthodox Jewish comedian’ Blaker returns with his take on what it means to be Meshuga Frum.

As ever a wonderful line up from the folk at XS. On Tues 7th it’s the turn of Derby comic David Longley to headline plus a secret special guest is on the bill. On Valentine’s Day it’s Swedish comic Henrik Elmer, then to round off the month on the 28th brilliantly dry Scot Stephen Carlin performs. But you’ve missed out the 21st, what’s happening on the 21st? Well I’ll tell you. It’s a bit special as it’s devoted to a tour date for Compared To What, Stuart Goldsmith’s latest, acclaimed offering. Judging by his previous shows it’ll be a consummate hour of polished yet heartfelt stand up.

The magnificent Thomas – activist, comedian, actor, dad, wearing of a natty Crombie – returns with the third in his theatrical one-man shows. In The Red Shed he recreates the scene of his first gig in a labour club in Wakefield.

This month deliciously crazed Canadian Bobby Mair headlines all three gigs at The Old Monkey on Wed 8, The Railway on Mon 13 and Solomon’s on Tue 14. Plus full support in each case of course.

This month the talent squeezed into a phallic-shaped skin is former wrestler Lee Kyle with support from Barnaby J Thompson and Sammy Dobson. And of course the sausage makers themselves Amy Gledhill and Chris Cantrill will be at the helm. 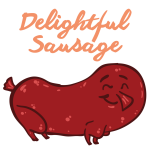 The second of the Group Therapy gigs this month is one of the best and most moving comedy shows of last year. Monkey See Monkey Do is a truly astonishing dissection of trauma, anxiety and machismo from Fife comedian Gadd. Somehow it’s bloody funny too. Deservedly, it won the 2016 Edinburgh Comedy Award.

The writer, journalist and radio DJ has no clue what he is going to talk about before the show, but reports have suggested that what does emerge is pretty amazing.

Wythenshawe’s own with his debut show, the beautiful Everglow, which deservedly got a newcomer nod at the Edinburgh Fringe last year. Catch him, he’s certain to be big.

The intensely sharp political stand-up. Saw Plan Z back in August, this is bound to be a different show now and bang up to date.

Politics and impersonations in Party Political from satirist Bremner.

More poking fun at politics (there’s plenty to go on at the minute), this time from the increasingly angry reporter Pie.

This lady just gets better and better. One of the finest comedians around, in Something Better Long takes a look at her life at 34 and considers the coming to terms with who and where you are in life and the state of the world, while managing to maintain a sense of optimism and hopefulness.

A screening of the comedy film that never ever gets old – Monty Python’s Life of Brian. Plus live performance from Noel James with support from Kieran Lawless. MC Roland Gent.