Damon Fairclough June 19, 2014 Bands & Gigs, Blasts from the Furnace, Music, Northern Soul writes... Comments Off on Thanks for the Memorex: rewinding the past with Record and Play

It’s a comment that was once so common, but is now never heard.

How nonchalant, how off-hand. But what we meant of course was, “I’ve poured my soul into this plastic container. I’ve captured my essence on a strip of ferric oxide. Please listen. PLEASE listen. If you don’t adore it, I don’t really think we can be friends.”

Switch, swap, cut, paste: a playlist with its guts spilling an abundance of music can be filled in just a few seconds. A few minutes maybe. But a tape, well, it demanded time. A 90-minute cassette took at least 90 minutes to make. It required records to be flipped and wiped as you went, and timings to be logged in order that…oh, the horror!… a song wasn’t cut off in its prime.

As a writer who often uses music to trigger the stories I want to tell – combining pop reportage with layers of memory and fiction – I’ve built essays around playlists in the past. A few years ago, for instance, I wrote a piece called Destroyed by Gods.  It was based on a selection of Sheffield music which I wove through with the atmospheres of the city in which I grew up. But when the DJ and writer Bill Brewster invited me to contribute to his DJ History website by putting together some themed playlists and writing about them, I found that I couldn’t help but conceive them as two-sided tales, stories that rewound through life and music, and which all began with the notional whirr and hiss of obsolete recording technology as it prepared to give up analogue secrets. 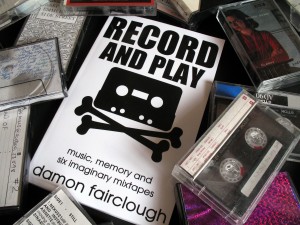 So that’s how the project proceeded: I wrote six pieces in the series, which also meant compiling six tracklists, each taking the form of an imagined mixtape, a carefully-considered sequence of music contained within the walls of an old C60 cassette. I say ‘imagined’ because these tapes have never been made, they exist only in my head. But they all have a very real presence in my imagination – the music held within has vibrated through my life, and the associated incidents and yearnings are what animate the tales I tell. From a cassette named An Abandoned Party with its focus on a teen gathering in a Sheffield suburb in the heart of 1985, through to Yorkshire 2112 with its pseudo-sci-fi study of a future Yorkshire beholden to the folk tunes of its past, this is music as progenitor of emotion, of memory, of magic, rather than as a means of just passing the time.

And now I’ve compiled these stories into a book, by which I mean the paper kind, the analogue kind – the endangered kind. Because while music and words can now exist in digital suspension, it felt perverse to discuss the physical manifestation of these aural spectres solely in a medium that can be turned off with a switch. So my book, called Record and Play: Music, Memory and Six Imaginary Mixtapes, can now be bought and browsed in three-dimensional form, before taking its place on a shelf alongside records and tapes and fat slabs of Betamax, with its spine broken, its spirit bent, and the corners of its pages folded down.

Not just words you see, but a presence. And not just music, but tape coiled inside a four-inch plastic box. 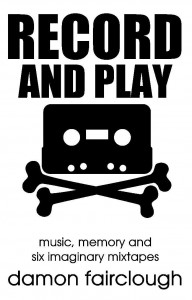 Reading this, you might imagine that I’m immersed in contemporary cassette culture, bursting with resurgent affection for that mystical magnetic thread. But you’d be mistaken. True, I regret that now we can all drag and drop with abandon, it seems the emotional investment in our selections is diminished. But back when cassettes were the only option for recording and reordering music, I deeply disliked their fragility and the way they always smothered the sound in aural mud. I looked forward to the day when technology would fast forward to something cleaner, more precise, less fussy. So though I miss the way that music could be both in your power and in your hand, I remember the attendant frustrations only too well.

And that’s why imagined mixtapes suit my purpose. In writing Record and Play, I was able to excavate the personal meaning behind my own choice of music, placing the likes of Black Uhuru, Cabaret Voltaire and the Cocteau Twins side by side with MFSB, Sun Ra and Age of Chance. I could weave narratives about wage slavery and a certain kind of sticky summer’s day together with haunted, dreamlike wanders through schools’ programmes, test cards and mild childhood illness. I could explore the miners’ strike and hosepipe bans and the memory of warm cans of Skol – and I could do it all without worrying about dirty heads, tangled tape, or wow and flutter and hiss.

So if you like the way that music interleaves with life, and you appreciate the idea of cassettes more than the reality, then I hope you’ll accept my gift.

Because I’ve made you a tape. Or rather, six tapes.

And all you need in order to hear them are your eyes.

Record and Play is available in paperback from Noise Heat Power