Just under a decade ago, Housemate and I used to frequent three Manchester pubs (if I said most days after work, you’d judge us, right?). The first was Sinclair’s Oyster Bar – the cute black and white building near Selfridges with the cheap drinks, oysters and slightly rowdy beer garden; the second, The Crown and Cushion – just off Corporation Street with a beer garden full of Biffa bins (I’ve got the snaps to prove it); and thirdly, our favourite watering hole, The Bay Horse Hotel in the Northern Quarter.

We’d meet up with our collective work colleagues, order pints and play pool in the dingy downstairs room. Ah, those were the days. But even before The Bay Horse shut its doors for a fancy new refurb, it’s been a long time since Housemate and I have set foot in the Thomas Street pub. So it’s safe to say we’re a bit excited to be back.

Newly-titled The Bay House Tavern, this is a modern take on the traditional British pub and described by its new owners as “The Rovers Return meets Soho House”. 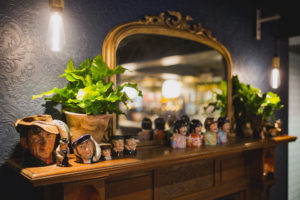 The first thing I notice is that it’s sticking with the low lighting. I always recall The Bay Horse being dimly lit, but this is something else. It’s not necessarily a bad thing as it makes for an intimate experience, but if like me you’re sight-challenged and often forget your glasses, it can be tough to make out your glass of vino from your elbow.

Gone are the Strongbow-swilling evenings of old, although there’s an excellent selection of cask ales on offer. Behind the bar is a range of cask and keg beers from Greater Manchester breweries, with a comprehensive spirits selection. Nevertheless, my friend and I order rich Merlot while Housemate goes for a tasty Malbec. They prove to be a little too moreish because, by the time our food arrives, we’re on our second glasses. 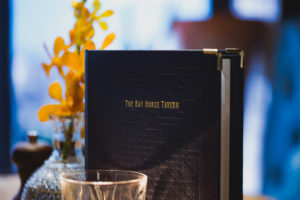 Housemate and our friend choose a few of the small plates. These dishes play on pub classics such as sausage with bubble and squeak (£5), fish and chips (£5), faggots and spiced sausage ragu (£6) and ox cheek with braised red cabbage (£6). As a veggie, I opt for the halloumi sandwich (£6) and we order some fries on the side.

Unfortunately, the food takes a long time to arrive and some of the dishes we order from the delicious-sounding menu are not available – including the selection of pies which I was eager to sample. My friend also orders the ham hock terrine from the small plates but is later informed that the chef isn’t happy with it and so won’t be sending it out. He orders some cheese instead.

While the halloumi sandwich looks the business – and it does, it’s mammoth – the salty cheese isn’t cooked enough for my liking (I reckon it should always be crispy and golden) so I’m a bit disappointed. We all take a bite and agree that it could do with a tad longer on the grill.

But it was an extremely busy night, with a great turnout, so it’s easy to see why food might have been a little in short supply – and why things might have appeared a little hectic. 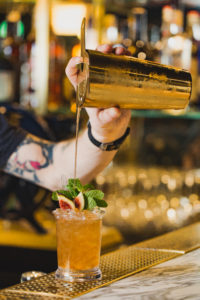 However, the staff are accommodating and pleasant, and I love the laid-back vibe. As we’re still eating, and we’ve already quaffed our second glass of wine, we ask what the cocktail menu is like and one of the waitresses brings out two tasty – and strong – concoctions for us to sample.

In part, it still feels like the ‘old’ Bay Horse – its essence is the same – but it’s had a facelift, and a successful one at that. The interior is stylish without being too formal. The main bar is situated upstairs and furnished with mustard and green fixings, and a tiled floor. Downstairs, the once shabby grey floor and pool tables that I loved so much have been replaced by an open kitchen and more dining space. The place certainly cleans up all right.

Despite a few issues with the food, I’ll be certain to head to The Bay Horse Tavern again. For me, it’s still a great place for a glass or two of wine with friends and a few snacks.