The Rocky Horror Show at The Palace, Manchester

Marissa Burgess June 18, 2013 Arts, Theatre Comments Off on The Rocky Horror Show at The Palace, Manchester

If I was going to dress up as any character in The Rocky Horror Show, I always thought it would be Magenta. For many years we shared the same style: a back-combed mop, too much eye make-up, fish nets. All I really had to do was find a French maid’s outfit.

Cut to the day before I’m off to cover the 40th anniversary week of the show at The Palace Theatre, Manchester and I’m still without a French maid’s outfit. In fact, it turns out that what my post-goth wardrobe throws up is a Columbia-esque outfit instead. With a quick call to a mate to borrow his top hat (thanks Reuben), the outfit was complete. Though I did buy a new red lippy, the old one had developed a bit of a funny smell living in a drawer for years.

It seems strange that it’s taken so long for me to see the live show. You see, I fell in love with the whole Rocky Horror shebang back in 1988 when I was an impressionable and thick-black-eyeliner-wearing 15-year-old. My friends and I had discovered the 1975 film version lurking on a TV channel late one night. Somehow I ended up with a ropey video tape of it too, recorded off the telly – one which was played thin among us small town goths dreaming of a way out.

So here we are 25 years later and myself and one of those other small town goths, Lisa, finally get around to going to the show. At first it feels like we might have left it too late, maybe we’ve missed our moment. But as soon as the butler Riff Raff appears above Frank-N-Furter’s castle, just as the snow white teens Brad and Janet break down in the rain in the third musical number, we knew everything was going to be just fine.

The show has been touring on and off for the full four decades. Someone somewhere, it seems, was always wanting to do their version of Rocky Horror – in fact we were planning to put on a production of it in a shopping centre but for some reason it never came off. So it’s a great honour that the actual anniversary (June 19) is being spent in Manchester and marked by a week of extra events at the Palace (best costume competitions, back stage tours and tonight’s Q&A with cast and crew). This version sure has a lot to live up to and thankfully it doesn’t disappoint.

Richard O’Brien’s now legendary tale features untouched teens Brad and Janet seeking help in the middle of the night when they pop a tyre near to the creepy castle inhabited by Dr Frank-N-Furter, his shifty servants, cloying groupies and his very own muscle man creation, Rocky. Needless to say B&J are considerably more ‘touched’ by the end of the show. 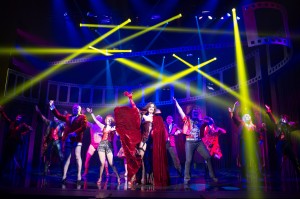 A larger than life Dr Frank-N-Furter is essential to the success of the show. The original live show and film portrayal by Tim Curry is a hard act to follow but Oliver Thornton is mesmerising in the lead role, not least because all of his honed muscles are in exactly the right places. He’s a statuesque, confident presence on the stage so it’s hard to believe that, as he confesses in the Q&A, he was nervous to take it on; though his previous role dragging up as Felicia in Priscilla Queen of the Desert surely had to help, not least in the wearing of high heels on stage. After the show, he also divulges, grinning, that wearing Frank-N-Furter’s footwear was “a piece of piss” in comparison. Other cast members stay very close to the film version of their characters. Ceris Hines as Columbia channels Little Nell’s squeak, and Kristian Lavercombe’s Riff Raff is a pleasingly perfect impression of O’Brien’s original portrayal.

Audience participation has become a big part of Rocky Horror over the years – it must have one of the noisiest audiences of any theatre production. Most flack is directed at the narrator and Philip Franks deals with the heckles with the aplomb of a seasoned stand-up. In the main it’s standard abuse, used over and over down the years, comedically shoe-horned into the pauses in the dialogue and shouted out en masse by the knowing crowd members. But tonight one person is so perfect in her comic timing that you wonder if she’s on the theatre pay roll, something that Franks addresses in the Q&A afterwards explaining that they never have a plant in the crowd. She even manages a reference to Tracy Beaker for Dani Harmer who played the eponymous children’s TV character for the BBC and here, rather aptly, playing the corrupted innocent, Janet.

A charm of the show is its timeless quality. It’s older than many in the crowd yet in they flock to partake of its huge sense of fun, perpetual use of innuendo and that gloriously open celebration of the bending of gender and sexual identity that was ahead of its time. Plus, the lure of the low budget B-movie horror films from which it took its inspiration endures today. A handful of German/Nazi sympathiser jokes date the script slightly but the “don’t dream it, be it” sentiment is, of course, one that we should all live by. After all, who could argue with that?

What: The Rocky Horror Show

The line-up of events for this week includes: 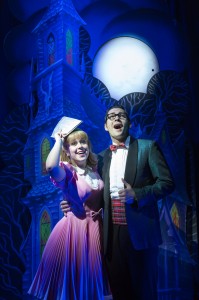