The USA goes to pot

Lynne Bateson May 11, 2018 Northern Soul writes..., Surfin' USA Comments Off on The USA goes to pot

I’ve just been to a posh pot shop. I had to show ID at the door and allow staff to input my details on their system, but after that it was like going into an Apple Store. It was sleek, respectable, and legal – well, legalish.

The shop, in West Hollywood near Beverly Hills, was one of the MedMen chain. It wants to remove any shame about buying cannabis for pain relief, anti-anxiety or pleasure. It promises a ‘premium shopping experience’ and quality assurance.

Medical pot was legalised in California in 1996, but it’s only since this January, thanks to the State’s voters, that licensed shops have been able to sell it to over-21s for recreation. However, not all cities give out licenses and pot is still outlawed federally by central government.

I ask Charlie, the super-friendly customer service guy who shows me around, if he worries about a raid by Federal agents (I was). “No,” he replies. “We’ve lawyers on board.”

Shortly after my visit, President Trump said he was going to respect State decisions on cannabis. If he’d said that earlier, I’d have been less twitchy.

Charlie, like all of the so-called budtenders, wears a red T-shirt. He escorts me around elegant displays of creams, extracts, edibles, soft drinks, cigarettes and cannabis buds. There are iPads to look up product details. I notice shelves of cannabis-infused supplements for dogs called ‘My Best Bud’. They are organic, non-GMO, pesticide-free and alcohol-free. 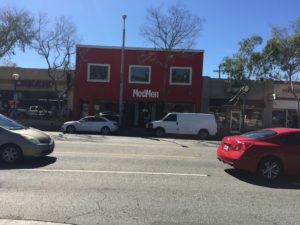 I linger over the chocolates. I notice, approvingly, that many are vegan. Cannabis-infused tangerine-flavoured dark chocolate at $30 for a 50g (1.7 oz) bar, instantly brings back childhood memories of Terry’s Chocolate Oranges. But unlike them, these treats must be nibbled with discipline – overdosing is easy since it can take two hours to feel the effects.

Buyers pay by cash or debit card. Since cannabis remains illegal federally, banks – which are insured and regulated by central government – refuse credit deals with sellers.

My fellow browsers are mostly white middle-class, many are over 40, and many are female. There are a few older men. Had they, I wondered, enjoyed their first taste of the drug while serving in Vietnam where cannabis grew wild? Soldiers sometimes shared cannabis packed in shotgun chambers. It’s said that many officers encouraged pot use when there was tension among soldiers since it kept them mellow, unlike booze.

Charlie, born long after that war was over, sounds like a pharmacist as he leads me round. He reels off product levels of THC (tetrahydrocannabinol), the compound in cannabis responsible for euphoric highs. Not that Charlie uses words like high. Instead: “That strain has energising properties, that strain is known for its sedative effectives, that’s a hybrid.”

He ses me eyeing up green, blue, and purple bath bombs. “Don’t expect a psychotropic effect from them,” he advises. “Skin’s great at keeping stuff out of your bloodstream, you know. But it’s got receptors, so there are localised effects. Topical cannabis in all its forms seems anti-inflammatory and may combat skin problems and pain from rheumatoid arthritis.”

Another red shirt, overhearing our chat, adds: “Those bath bombs are great for sore muscles after working out.”

MedMen is spending $2 million on advertisements destroying stoner stereotypes with pictures of upright citizens who use pot. It has a hi-tech cultivation and manufacturing factory in Northern Nevada and a new store on New York’s iconic retail street, Fifth Avenue. And, after swallowing a listed Canadian firm, it’s set to be publicly traded on Canada’s stock exchange for small companies. 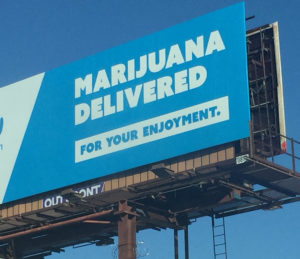 Cannabis is getting so mainstream that where it’s legal it’s being substituted for beer. Joining the new gold rush are online delivery services such as Eaze, the Uber of cannabis, which promises pot quicker than pizza. Sensing big bucks, the giants have been sniffing around, no longer frightened to be associated with pot, albeit at the moment, often at arm’s length.

Already Walmart, Home Depot, and Amazon have done a distribution deal with a company producing potting mix for, err, pot. And former House of Representatives speaker John Boehner – once “utterly opposed” to the liberalisation of cannabis – has joined the board of a cannabis investment company.

But while customers and business have new freedom to enjoy and profit from pot, many people have lost and are still losing their liberty simply for possessing and using. They are mostly black.

Despite white and black people using the drug at similar rates, black people are ten times more likely to end up in jail, often working for big companies for peanuts. It’s modern slavery.

Racist fears and stereotypes underpinned the prohibition of cannabis in the first place in the 1930s. Controlling it became a way of controlling the “others”. 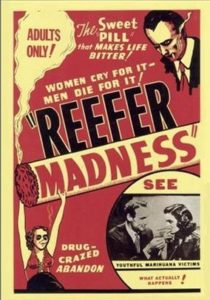 In the 1920s, cannabis was accused of giving bloodlust and superhuman strength to Mexican immigrants in the South West who smoked it the end of a day’s back-breaking work. And cannabis brought into heavily black places like New Orleans by sailors and Caribbean immigrants was said to make black men violent and solicit sex; presumably prohibitionists were only concerned if victims were white. Horrifically, race is still used as an argument for keeping cannabis illegal. A politician in the South recently said that black people are genetically unable to handle it.

Whites, however, were not seen as immune to the insanity and debauchery that cannabis was accused of causing. To get a flavour of the hysteria, I recommend Reefer Madness, a 1936 movie on YouTube.

America’s change of heart is nearly complete. But I’d be happier if all who benefit go on to petition politicians on behalf of imprisoned users.

Did I leave the MedMen store clutching one of its classy red childproof zipped bags? No. Like journalists of old who visited vice dens for stories, I made my excuses and left. I’m more of a Scotch girl. But those bath bombs are calling after me, and my birthday is coming up.