Theatre in Mind and Body

Alfred Searls July 2, 2013 Arts, Theatre Comments Off on Theatre in Mind and Body 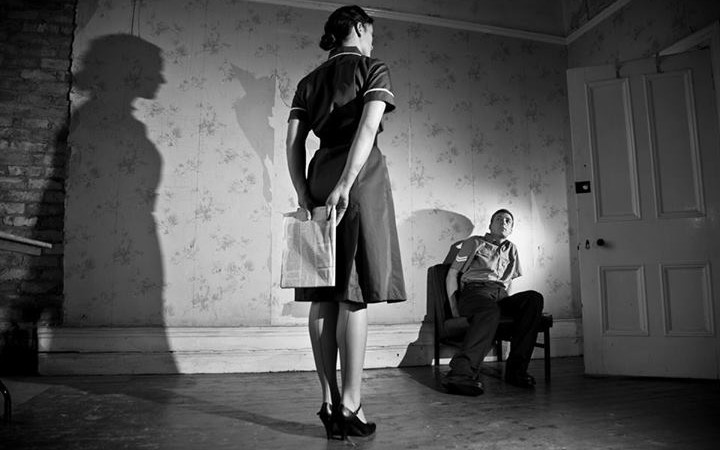 Theatre means different things to different people. Of course there is some common ground, upon which we all meet, and the individual perspective should always be open to change; nevertheless we are creatures of habit, and one of mine is to seek out the theatre of ideas.

This I found, last Friday, at a performance at Sale Waterside Theatre of The Man Who Woke Up Dead. The play is a dark tale of control, both public and personal, and the three characters, a doctor, a nurse and a man who may or may not be a soldier, were deployed on stage like chess pieces, with each move serving both a tactical and strategic purpose.

The doctor, played by Phil Minns, is a self-possessed individual and early on, with his controlling and sometimes menacing attitude towards nurse Evelyn Scott, he’s given the metaphorical black hat to wear. Minns is at his best when his character’s buttoned up mask slips and, in keeping with the general air of uncertainty, we’re never precisely sure what motivates him.

Nurse Scott, played by Katie Robinson, who is also the producer, is the lynchpin in relations between this troika. Robinson plays her – and plays her very well – as a beautifully brittle young woman who is determined not to be helpless in the face of danger. Sometimes that danger is corporeal and wears a white coat; sometimes it is ethereal and dimly skulks at the edges of her consciousness. In this she is aided, and aids in return, the eponymous man who wakes up, played by Michael White, who is also the director and writer. White’s character is an enigma, whose identity crisis admirably feeds the air of paranoia that underpins the whole production. 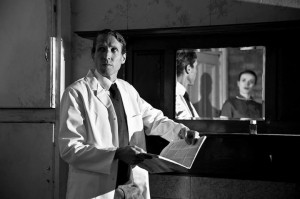 In addition to their assigned roles, the three of them gave an accomplished performance in a wonderfully choreographed example of physical theatre. Doors, stairs, chairs and even a Ford Consul were represented by the cast, and all in such a flawless and naturalistic way that this use of bodies rapidly merged seamlessly with the few physical props on stage. In fact I really can’t praise this enough as it allowed them to expand the imaginary space to such a degree that it really began to seem like they were trotting around the whole hospital. In doing so the performance was lent a curiously high degree of credibility, and a realism that a minimalist space would normally struggle to produce.

Square Peg was formed in 2011 with the stated intent of creating “three dimensional theatre” and on the basis of this performance I’d say that they’ve got the hang of it. But, as Katie Robinson told me, “we hesitate to call it physical theatre because we’re just as much driven by dialogue and ideas”. Personally I’d say that does come across in the script, which right up until the end manages to impart ever more sinister levels of secrecy and deception.

Michael White said: “It’s a story of truth, fear and betrayal. We wanted to create an atmosphere of cold war paranoia where nothing was certain and nothing was black and white.” In achieving this it also highlights a very modern obsession, namely that of the medicalisation of melancholia. The play provides a timely warning that our increasing acceptance of full chemical intervention, into states of mind which were once regarded as part of normal human experience, could in the wrong hands prove to be a very powerful tool of social control. White wisely resists the temptation to leaven the script with humour, which in my opinion would have only served to dilute the impact of its cautionary messages, and the finished product is all the better for it.

The Man Who Woke Up Dead was co-produced by the Waterside Arts Centre and Creative Industries Trafford, as part of their joint ‘To the stage’ scheme, which aims to help emerging theatre-makers put on a show by offering funding, technical support, a venue and artistic expertise. And that technical support, from Owen Rafferty and Joel Clements (sound and lighting respectively), also played an important part in sustaining the successful theatrical illusion.  Applause is also due to Arts Council England for funding it.

The play only had a short run, which is a shame because it deserves a wider audience, and I for one hope it gets picked up elsewhere. As things turned out this was an interesting and memorable example of both the theatre of the mind, and of the body. Well done Square Peg.

What:  The Man Who Woke Up Dead

Where: The Sale Waterside Theatre