Written in 1949, Death of a Salesman remains as relevant and fresh as ever.

There are hardly any travelling salesmen now, but we can all identify with Willy Loman, a man who has swallowed whole the American Dream but has no idea it’s always been out of his reach. In Arthur Miller’s classic tale, we witness Willy’s professional and personal disintegration, joining him at the end of his journey through life.

Don Warrington plays Willy as broken and exhausted but still capable of the occasional burst of incandescent rage. Willy simply doesn’t understand why things have not turned out the way he planned – and tells himself almost any lie to ease the pain. He’s trying to sell the others in his life, including his wife, Linda and their two sons Happy and Biff, on the lies he has already bought.

Director Sarah Frankom’s in-the-round staging is simple and clever. A play with so many shifts in time is tough to stage in a theatre like the Royal Exchange, but the minimalist set – just a table and chairs – and the beautifully designed sound and lighting ensure the audience is never confused about where, or when, we are in the story.

The casting gives the drama an edge by presenting the Lomans as African-Americans, which perhaps goes some way to excusing Willy’s blind ambition and unachievable aspirations. Linda (his white wife), played by Maureen Beattie with heart-wrenching earnestness and sometimes utter bewilderment at what’s happening to her family, has spent their married life appeasing, applauding and admiring her husband and his ego. 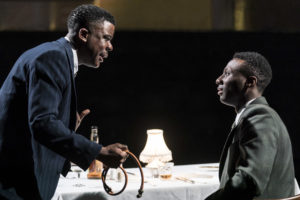 “Shall I make you a cheese sandwich dear?” she asks when he returns home, exhausted late at night. “It’s whipped cheese.”

He’s been a travelling salesman for years, selling for a New York company with some degree of success. But now he’s 63 and a broken man, reduced to working for commission only and finding it impossible to drive his car further than the limit of the city he lives in. His professional unravelling is matched by a personal one.

His sons, who he thought held such promise, have disappointed him. Biff (a wholly believable and emotionally effective performance by Ashley Zhangazha) is a drifter and at 34 works on a farm in Texas for buttons, while his other son, Hap, has remained in New York and professes to have achieved the American Dream with a life of high-flying agency work and endless women. But of course, Hap is his father’s son, and everything is not as it seems.

Willy can at least admit he is failing. He tells Linda the buyers he deals with on the road are now mocking his “walrus” features and have started to find him “foolish to look at”. But just as you start to feel sorry for this quick-tempered and controlling patriarch, he’s off again – demanding Linda “shut up and let me finish” and bullying his sons. 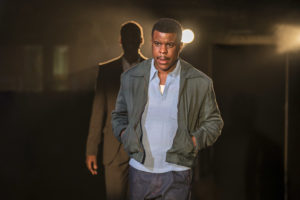 The play cleverly mixes the past and the present as the characters slip in and out of view. This works especially well when Willy’s estranged brother Ben, wonderfully played by Trevor A Toussaint – the taller, broader more imposing sibling in Willy’s eyes – circles into his memory as a ghost-like confidant, validating Willy’s view of himself and his life. In these scenes Willy is, of course, talking to himself.

It’s interesting that when Warrington takes Loman and sits on the side of the stage, with his shoulders slumped and head down, that’s when he looks at his most vulnerable and broken. He somehow often manages to remain the centre of attention, even though motionless and unlit. The play’s powerful end leaves Warrington’s Loman shuffling in the night, his slippered feet eventually taking him away from his dream forever.

And while Willy’s exhaustion is profoundly moving as Warrington plays out his final scene, the real tears come as we witness his sparsely-attended funeral, when a bewildered Linda asks softly: “Why didn’t anybody come?”

Death of a Salesman, directed by Sarah Franckom, is showing at the Royal Exchange until November 17, 2018.