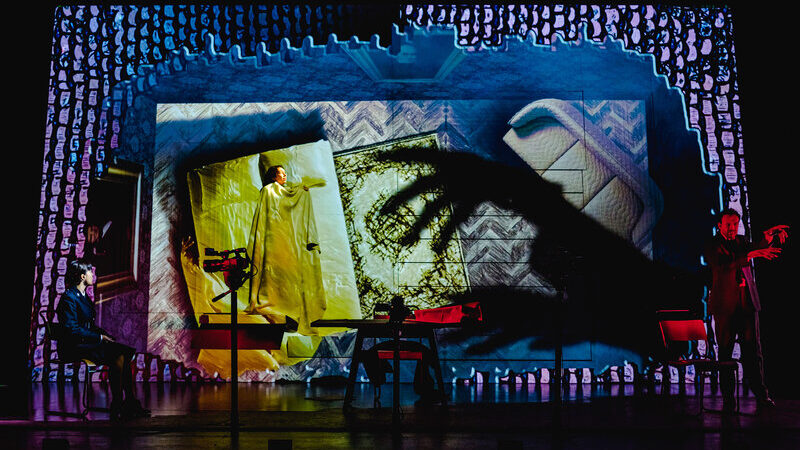 “We have staged Dracula: The Untold Story as a live graphic novel,” says UK theatre company imitating the dog. And that is precisely what they have done.

Actually, what they have managed to do, along with co-producers Leeds Playhouse, is to show us the novel and the process by which it is made.

About 30 years ago, restaurants discovered that customers liked watching the kitchen in action and that chefs preferred working in daylight rather than in hot basements. Thus, the open kitchen was born. Dracula: The Untold Story is a bit like that.

It starts in what looks like a police station with the arrival of a woman who claims to have information about a body that has just been found in Soho, London. No spoilers, but we soon discover that the room is mostly a projection and the character’s name is Mina Harker. The plot and the technology develop from there. 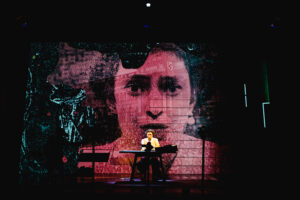 Mina Harker is the wife of Jonathan Harker, the storyteller in the original Dracula, written in 1897 by Bram Stoker. But we are now in the 1960s. So, how can she still be here, looking so young and vibrant with energy? That’s part of the key to the story. The other is that we are now in a counterfactual universe where Dracula really existed and much of history has been changed. If you listen carefully to the newsreel at the beginning, you’ll hear a large clue in the name of a famous rock band. I thought I’d misheard, but now I know better.

Early in the action, the other two actors, Adela Rajnović as PC Williams and Matt Prendergast as DS Donaldson, set up cameras on the stage, which transmit images to the projection on the back wall. Then, they perform to the cameras with a range of characters, languages and postures, which is amusing to watch and to compare with the images on screen. But it doesn’t advance the narrative. That is carried by the imagery and by Riana Duce as Harker, who is almost never out of character. 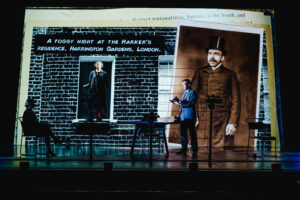 I saw Duce give her Cinderella at The Dukes in Lancaster a couple of years ago, and said in my rather light-hearted review that she was ‘gorgeous’. My opinion hasn’t changed, although the tone of this review requires me to say that she is rather excellent.

The company says: “Graphic novels are often brash, able to fuse large ideas and storytelling with an audacity that would not be tolerated in the cinema or in literature.” I would add that it’s almost impossible to do in the theatre. Well, other than here, of course. 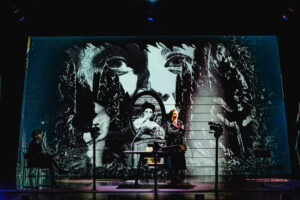 Certainly, the idea behind the story works well and, short of making a movie, this is probably the only way to tell it. But is it theatre? Yes, Jim, but not as we know it. On the other hand, who cares? It’s an entertaining show with a coup de théâtre at the end, and Bram Stoker (himself a theatre manager) would have loved it, I’m sure. The large number of school and college kids who were present in the audience certainly did.

Dracula: The Untold Story is showing across venues, including The Lowry, Dukes Lancaster and Liverpool Playhouse, until November 31, 2021. For more information, or to book tickets, click here.