Well, that was odd. A comedy about Margaret Thatcher and the Queen and it’s very funny. Who’d have thought it? Two of the least funny people I can imagine or, in this case, four as there are two of each of them, younger versions circa 1980s and older ones circa 2000, just before Mrs T got dementia. They’re hilarious, although, rather cleverly in the case of the Mrs Ts, entirely unintentionally. She was notoriously humourless and uncultured. When presented with the famous conference speech in which she was to say, ‘you turn if you want to, the lady’s not for turning,’ the joke, and the reference to the Christopher Fry play* had to be explained to her – twice.

Sarah Crowden and Alice Selwyn carry off the Mrs Ts with precise vocal inflections and ramrod backs, which is as it should be. Susan Penhaligon plays the older Queen with wit and charm and looks rather like her. I found this a bit disturbing as I, along with the rest of the nation, fell in love with Penhaligon in the 70s in Bouquet of Barbed Wire, a famous TV series about adultery, and my memory of her is preserved in libidinous aspic. Caroline Harker plays the younger Queen with similar poise, and the fact that she is a foot taller than her alter ego doesn’t matter a jot. 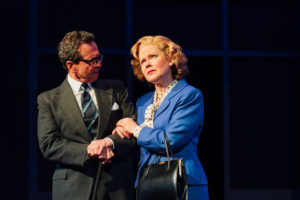 The humour is greatly assisted by Jhavel Hall and Andy Secombe who portray all the important men in their lives and frequently drop out of character to comment on the action and give younger members of the audience a gloss on the proceedings. If there is a problem with the piece, this is it. Moira Buffini wrote it 10 years ago, so everyone aged over 30 would have got most of it then. But now, if you’re under 40, unless you’re a student of political history, most of this will mean nothing to you. I was 30 when Thatcher came to power so I understood it all and, in fact, felt that some salient bits were missing. But the 28-year old chap who came with me barely gleaned any of it. In fact, at one point he said, “But weren’t the trade unions really bad?”, which shows that Thatcher’s legacy is alive and well.

So what is this? It’s not a satire, it’s more of an irreverent look at Thatcher’s reign and it manages to be funny and still deal with some of the dark stuff like the miners’ strike and the IRA bombing of the Tory Conference in Brighton. Messrs Hall and Secombe are used to great effect here, offering alternative political views, and Hall, a person of colour, does a great job as the heads of a number of Commonwealth countries. Secombe, a white man, has a great line in the double-take and gets a good laugh from those of us in the business when he answers Hall’s question: “What was the closed shop?” with “when actors used to get paid a proper wage”.  That’s typical of the knowingness of the production which is only too pleased to acknowledge the presence of the audience. None of that fourth wall nonsense here. 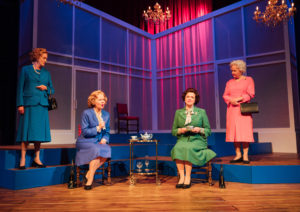 I met the director, Jo Newman, who is to be congratulated on not only staging this play nicely, but also clearly having done a great deal of homework in order to understand the nuances. Dawn Allsop’s design is efficient and the other technical elements are unobtrusively handled, there being no room here for dramatic interventions.

And that’s the point. As a piece, it is rather odd. Not a play as such, nor a celebration, more of an entertainment. You won’t learn anything, but if you’re old enough to understand it, and to care, it’s a right good laugh.

*The Lady’s Not for Burning was a big hit in London in 1949 when Thatcher was 22-years-old. It’s written in verse and set in the 14th century. Wiki says that ‘it reflects the world’s ‘exhaustion and despair’ following World War II, with a war-weary soldier who wants to die, and an accused witch who wants to live’. It was so well known that we did it in school in the 1960s.