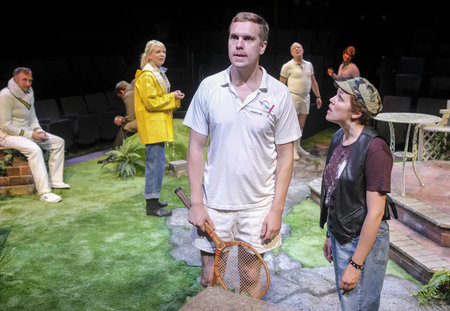 It seems a strange thing to do, on a boiling hot summer’s evening, to come in out of the bright day and ensconce oneself in a dark theatre, along with hundreds of other people, to watch a play set outside in a garden.

It is testament to the popularity of Alan Ayckbourn and the Stephen Joseph Theatre that so many people braved the dark heat to see a play written and directed by the man himself. It’s 40 years since Ayckbourn wrote the play and his fifth time directing it. And it’s one of his personal favourites, an ‘orphan’ which didn’t do so well in the West End but was, and is, hugely popular up here in Scarborough. Legend has it that he wrote it as a challenge after being confronted by a theatre patron who asked him why he only ever wrote plays about miserable people. But here’s the thing. Plays about happy people are pretty boring, from a dramatic perspective; the real challenge is not to present a happy couple, the real challenge is to create a play in which the dramatic tensions, love interests and obsessions that we love to be shocked by can still occur. 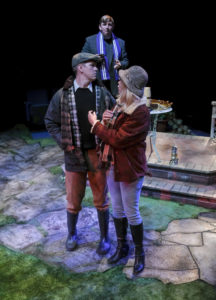 Joking Apart centres around a golden couple, Anthea (played by Frances Marshall) and Richard (Laurence Pears) who have found happiness with each other after unsuccessful first marriages. Richard is a happy-go-lucky successful business man, Anthea is enviably slim, beautiful and kind, a talented cook and a brilliant hostess.

Or not, actually, as that would be a terribly pointless play. Instead, revolving around them are the characters who provide the dramatic tension: new vicar Hugh (Jamie Baughan) and his tremulous wife Louise (Louise Shuttleworth), business partner and friend Sven (Leigh Symonds), his wife Olive (Liz Jadav) and long-term friend of the couple, Brian (Richard Stacey) and his string of girlfriends (all played by Naomi Peterson). All of whom have a reason to feel envious and even jealous of the golden couple, resulting in a gentle comedy which is not about a happy couple at all, but about the way that people decide to be happy with their lot, or unhappy looking only at the successes of other people.

The entire play is set in one garden, that of Richard and Anthea. The opening scenes are in November 1966 and the play moves through the years up to 1978 in a poignant and clever exploration of time, relationships and perspective. The thing about beautiful, happy, lucky people is that you either love them or hate them, there’s rarely any middle ground of indifference and this is explored beautifully in Joking Apart. 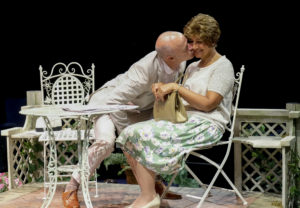 This is not a play of fireworks and explosions (except in the first scene which is actually at a bonfire party); it’s a slow-burning, enjoyable play with a light touch to the tragedy and characters who do not fight for the light. Nothing much happens at all during the first half in terms of drama, but the dialogue quietly draws the audience in until they are absorbed. It all gets a bit more heated in part two, including a wonderfully funny tennis match. This is a play not only about perception and how bitterness and rivalry can undo your own happiness, but about the passage of time and how we hang on for dear life to the past and miss out on a future because of it.

Joking Apart is an Ayckbourn classic, a gentle comedy with some surprisingly poignant moments and well worth going to see. 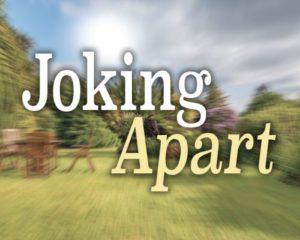 Joking Apart is on at the Stephen Joseph Theatre at Scarborough until October 4, 2018.