Review: An Officer and a Gentleman: The Musical, Manchester Opera House

It may be more than 35-years-old but the sight of a young Richard Gere in an all-white naval officer’s uniform remains an iconic image and one, if we’re being honest, that still gets hearts-a-racing.

So I was curious to see if the magic of the 1982 film could be reimagined on Manchester Opera House’s stage on a rather gloomy August opening night. Thankfully, it didn’t disappoint. This production’s wonderful musical score injected new life into a much-loved 80s classics. I sat back and enjoyed the imaginative reinterpretation of a cult movie, filled with drama, comedy and the spark between Zack Mayo and Paula Pokrifki that set the original Hollywood film alight. 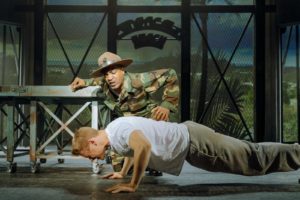 An Officer and a Gentleman: The Musical retells the story of young wannabe naval officer who, along with other naval novices, are subjected to brutal training under the watchful and critical eye of Sergeant Foley as they aim to make it to the end of the 12-week programme. With the help of Paula (a factory worker who dreams of a life beyond sorting envelopes into boxes). throughout the three months our naval recruit learns what he really wants out of life, pushing him to go all the way.

The production features a notably gritty, if a little teenage-angsty, performance from Jonny Fines as Mayo, and Emma Williams as Pokrifki complements this with her feisty performance of a determined, principled young lady. However, as with the original, the stand-out performance is that of Sergeant Emil Foley, here played by the wonderful Ray Shell. Living up to the Oscar-winning performance of Luis Gossett Jr. was no mean feat, but Shell does so with ease. He’s the source of a plethora of funny one-liners all the while portraying the cut-throat, no-messing Sergeant.

But where this production really packs a punch is in the musical score, brilliantly performed by musical director Michael Riley’s orchestra and beautifully and powerfully sung by the entire cast. Not working with an original soundtrack must be a huge challenge for any musical director yet An Officer and a Gentleman: The Musical pulls it off with gusto. Breathing new life into many classic tunes from the 80s, the cast and musical team allow the audience to experience the songs as if for the very first time.

With all the romantic appeal of the original motion picture and more, director Nikolai Foster and the creative team behind An Officer and a Gentleman thoroughly deserved a standing ovation on opening night; the first of many no doubt for one of this year’s must-see theatrical performances.

An Officer and a Gentleman: The Musical is on tour. For more details, click here.