Up betimes and to York with a cushion to catch the matinee of Macbeth by Will Shakespeare, performed in the new open-air Rose Theatre by Clifford’s Tower. In his review of A Midsummer Night’s Dream my colleague Stephen Longstaffe waxed lyrical about the Rose experience, so I won’t go on about it save to say I was there all day and had a jolly nice time – although the wine is a touch pricey. But to business.

There are lots of problems with staging the Scottish play, as we theatricals call it. Most obviously, how do you do the witches? Do you show the imaginary dagger? Do you show Banquo’s ghost?  According to A.C. Bradley, the great scholar, Shakespeare’s company did show the ghost but here the director Damien Cruden has eschewed the Hammer Horror approach – no dagger, no ghost, and the witches are almost a bunch of travelling players putting on costumes and props for their encounters with yer man. So no magic, but their prophecies still come true. 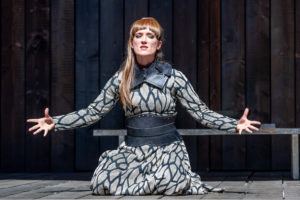 There are problems of character, too. When we first meet Lady Macbeth she is reading her husband’s letter in which he tells her about the prophecy that he will be King, and she immediately sees the implications and is full on for it. So, not a lot of room for doubt that she’s a clever, ambitious woman of her time. Unless, of course, she and her husband have discussed the possibility of murdering the King previously, before the play begins? There is textual evidence for this when Lady M, furious at his reluctance to kill Duncan says, “What beast was’t, then, that made you break this enterprise to me?” But Bradley says, on balance, probably not and Cruden seems to take that view.

The problem then is how does Lady M present her dastardly scheme to her husband? Does she try to persuade him with her wiles, or just get on and bully him into it? You can do either with what Shakespeare has written. Here a very determined Leandra Ashton has the bully by the horns and poor old Macbeth doesn’t stand a chance. I mean, we really do feel sorry for him. Well, I did. 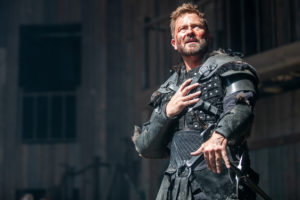 And then he’s got the curse of the soliloquies to deal with. Everyone knows “Is this a dagger that I see before me” and “Tomorrow and tomorrow and tomorrow” and the actor knows we know and that we are waiting to see how he performs them. Richard Standing does them rather well in that he makes them his own. Indeed, his Macbeth got better and better as the consequences of his vaulting ambition began to oer’reach him. But I felt the play, which is a story all about power and what it takes to get it, failed to show us what that power meant – and therefore why Macbeth might want it.

It’s all about ‘playing the King’. The actor George Costigan explained this to me many years ago. Medieval kings like Duncan and Macbeth had immense power and could have your head off at the point of a finger. But how do you show that on stage? What you have to do is make sure that everyone on stage with the King behaves as though he could kill them with a gesture, even his top men. All the more so when you’re in the court of a nutter like Macbeth. A bit like working for Donald Trump now, I imagine. I thought King Duncan was treated like one of the lads, albeit the one who was paying for the beer. The point is that if Duncan is shown as a powerful King, his murder seems all the more transgressive and dangerous. And we would understand why Macbeth wants the job. 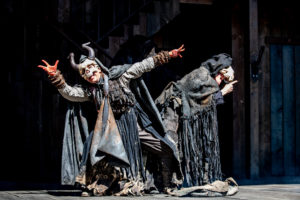 There is some good acting here. This is an extremely experienced ensemble and, to get the full measure of their skills, you need to see A Midsummer Night’s Dream, too, in which they all double. Standing gives an un-ambitious Snug the Joiner; Clare Corbett, after delivering a terrifying assassin who looks at Macbeth as though she would like to eat his liver, becomes a glorious mischievous Puck; and in reverse, Finetime Fontayne gives a horny Fairy while his Porter in Macbeth is a revelation. Normally a difficult comic interlude, Fontayne makes it simultaneously hilarious and menacing, clearly drawing on his experience as the Dame in the Oldham Coliseum panto.

You can see both plays on the same day, as I did, and I’d recommend seeing one from the seats and one from the pit with the other groundlings. Take a cushion.

A note on ‘the Scottish play’: it’s thought to be bad luck to say the title of the play inside a theatre, especially a dressing room. The forfeit I know is to go outside the building, turn around three times, and spit. The reason for its reputation is that the play was thought to be a banker – a show that’s guaranteed to make money – so theatres in financial trouble would put it on and if they still went broke Macbeth was thought to be the cause. Oddly, knowing this doesn’t stop me going outside, etc etc.

A note on ‘‘What beast was’t, then, that made you break this enterprise to me?” I used to have a girlfriend who said things like ‘when are we going?’ And I’d say ‘what?’ and she’d say ‘to France. You promised to take us to France.’ And, although I had absolutely no recollection of saying anything of the kind, off we would go to France. So, I have no trouble at all in imagining Lady M saying this to her husband, she might even believe it, and all Macbeth can do is think ‘WTF?’.