From a national monument made permanent by popular demand to poppies sewn into football shirts, the Unknown Warrior to the two-minute silence, Lest We Forget?, a major new exhibition at IWM North, explores how symbols commemorating the First World War have endured for a century and, at times, sparked controversy.

The First World War caused casualties on a shocking and unprecedented scale, with the human cost of the war becoming one of its defining legacies. Lest We Forget? gives visitors an understanding of how that cost in lives has directly influenced how we see the ‘Great War’ and have paid tribute to the dead.

The exhibition brings ‘remembrance’ right up to date – showing how perceptions of the First World War, and its human cost, have become so familiar to us through popular culture; from Blackadder to Birdsong. 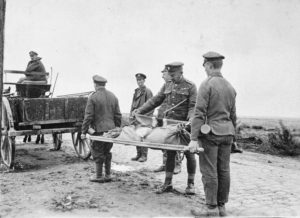 The selection of bodies for The Unknown Warrior in France Photograph

The exhibition encompasses five themes that explore commemoration of the First World War as a fluid concept, one which spans intensely personal mantelpiece memorials, grassroots community tributes, state rituals and memorials, as well as popular movements and cultural outpourings. More than 180 objects, photographs, film clips, sound recordings and documents are on display, ranging from a photograph showing the selection of a body for the Unknown Warrior to an original Joey puppet from the National Theatre production of War Horse.

The exhibition includes a display of 10 paintings commissioned by the British government in 1918 from some of the nation’s most prominent war artists. They include renowned paintings by Paul Nash, Stanley Spencer, Wyndham Lewis and John Singer Sargent, whose painting Gassed (1919) has returned home from its two-year international tour for the exhibition. These works were intended for a First World War memorial gallery – the Hall of Remembrance – which was never built, for reasons the exhibition reveals. 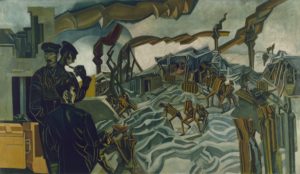 Lest We Forget? is part of Making a New World, a season of innovative exhibitions, installations and immersive experiences at IWM London and IWM North in 2018 which explores how the First World War has shaped the society we live in today.

By experiencing the exhibition, visitors discover how remembrance has changed and been re-imagined over the past 100 years.

A series of live events will complement the exhibition programme throughout the season. IWM North will host immersive experiences; from live music to dance performances, all encouraging debate and conversation around remembrance.

Hear the powerful poetry of acclaimed Mancunian poet Tony Walsh alongside poignant imagery and film from IWM’s collections in a brand new Big Picture Show. The new poem, Mightier Than War, explores the triumph of the human spirit in times of conflict through his unique and enthralling storytelling. The Big Picture Show is an immersive sound and 360 degree projection that brings personal experiences of conflict to life in the Main Exhibition Space. 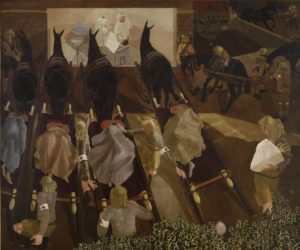 The casualty count of the First World War was immense – but it came to be dwarfed by the deadly Spanish flu pandemic that swept through the world during the conflict’s final year – the lesser known story of the First World War. Contagion, a powerful new dance piece from leading choreographer Shobana Jeyasingh, is inspired by the nature and rapid spread of the flu virus – the unseen enemy that mankind was battling, while engaging in more conventional warfare in the world outside.

Contagion is co-commissioned by 14-18 NOW and Shobana Jeyasingh Dance, and supported by Wellcome, Oak Foundation and the Deborah Loeb Brice Donor Advised Fund at CAF America.

Further events will be announced over the course of the season on the IWM North website.