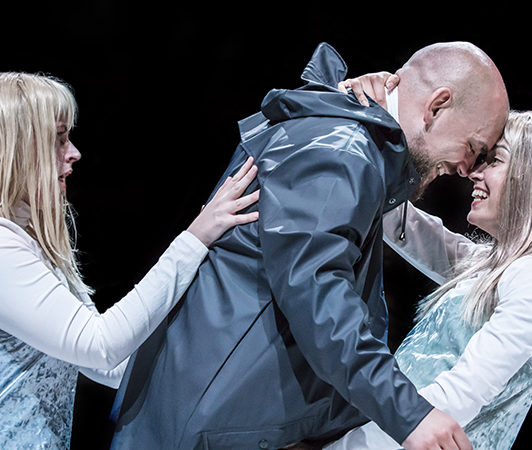 There’s a line in this show that encapsulates both the successes and challenges of the production.

Captain Wentworth suggests that the Elliots and the Musgroves accompany him to the seaside at Lyme. Mary Musgrove retorts “But it’s 17 miles!” – and brings the house down. Why do we laugh? Because everything about the production – except the language – is so 21st century; the idea that a journey of 17 miles would be a problem for these characters is ridiculous, and the sentiment matches the tetchy dissatisfied character we are given in Mary.

If this was a period production complete with big frocks, Mary’s outburst wouldn’t seem odd at all, and we would be made to focus on the difficult lives these women were forced to lead. As it is, that social detail goes by the board, the narrative concentrating rather on the bigger ideas such as money, inheritance, the necessity of marriage and the nature of love. But how brilliantly it does all that. 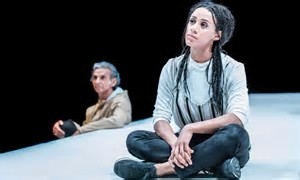 From the opening sequence with a body prone and face down on the white rectangular raised stage, and the entrance of Sir Walter (looking more like Iggy Pop than a 19th century minor aristo) to the show-stopping appearance of Lady Dalrymple in act two, the production is a series of clever, delightful surprises that should, and do, make sense in relation to the world it conjures, and illuminate the relationships it explores.

But it’s not all lie back and enjoy it. The audience does have to do some work. Why does Anne have the ability to throw other characters off the stage, a talent she loses later? Why do characters not in the action either vibrate to the underscore or watch the action from the stalls? I know, I worked it out (I think), and very satisfying that was too. 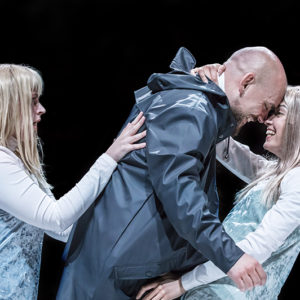 As any Game of Thrones fan who has read the books will tell you, there are sacrifices when moving from one format to another. Usually, taking text to performance, it’s narrative detail, and the major change here is the loss of the Mrs Clay story. She does appear in the house at the start, and her designs on Sir Walter are hinted at. There’s also an interesting moment in act two with Elizabeth which I’m going to have to go back to the book to check, but Mr Elliot’s concern that she might marry Sir Walter and create a male heir who would replace him in the entail is lost, and the plot is resolved another way. But if you don’t know the book, you won’t notice.

The performances are all excellent, and the doubling is mostly clear and sometimes hilarious. However, Lara Rossi as Anne deserves a special mention for creating her character’s difficult emotional journey absolutely truthfully and clearly, so much so that I had to wipe a tear from my eye at the end.  That’s when I wasn’t laughing my socks off.

If you’re a frocks and social detail purist, you might find this production underwhelming. But the text is available and there are plenty of fully-frocked versions around so you could simply regard this production as a jeu d’esprit. Did I say it was funny? And extremely entertaining. I for one could do with a bit of that in these dark times.

Persuasion is showing at the Royal Exchange in Manchester until June 24, 2017