Three star reviews can be a cop out. I worked for one editor who unofficially banned them. They can mean fence-sitting; not-committing; bet-hedging.

In this instance, the three stars awarded to Gecko’s latest physical theatre production, The Wedding, at Liverpool Playhouse represent a truce between the two stars that one part of me wanted to hand out and the five being lobbied for by the other.

You can make a legitimate case that this show is baffling and pretentious. I spent the first half of its 80 minute running time mentally composing and rejecting theories for what on earth was going on in front of me. I am not a particularly stupid person, but I found myself sitting in a darkened theatre wondering whether it was my own philistine fault that I was confused. I don’t think it was. The multi-national company speak multi-lingual (and therefore deliberately incomprehensible) dialogue, while exuberant dancing and mime did not begin to fully cohere into something representing a narrative – or even a concept – until midway through the production. 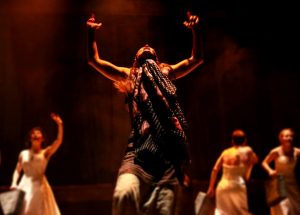 I wish that I had read more in advance about the origins of The Wedding, which is about both matrimonial ceremony and the relationship between individual and state, but I don’t think it should be beholden upon theatre-goers to do their homework as a precondition to non-bewilderment. And yet. Amit Lahav’s show does cohere, loosely, in its second half. The notion of contract, of signing up to a set of societal rules and the legitimacy of then breaking that bond, becomes clearer as a driving theme. Everyone is a bride, married to something almost from birth – but those are sometimes forced marriages, so should we be fighting harder for divorce?

The atmospheric visual spectacle of the whole thing was substantially more enjoyable once this clicked into place. Even before then, the performers were engaging and energetic, and at times genuinely funny. And designer Rhys Jarman has done a glorious job; the production oozes character, with an aesthetic that will feel familiar to those who saw Gecko’s previous work, Institute. At The Wedding’s end, the nine-strong company sit in chairs across the front of the stage, illuminated by lightbulbs above their heads, and on the way out of the theatre I heard a fellow audience member saying that he had just had his own “lightbulb moment”, with the performance now making sense. I am glad that shows like this, and companies like Gecko, exist. Theatre would be a sadder and less thought-provoking place if risks were not taken and boundaries were not pushed. I just wish the lights had come on a little sooner.

The Wedding is at Liverpool Playhouse until February 24, 2018. For more information, click here.