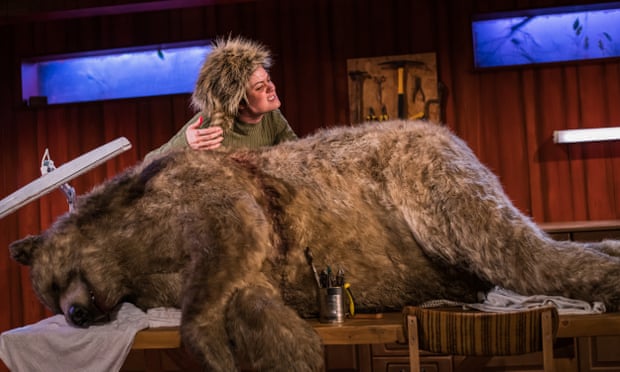 Sometimes you watch a play which is so good that it revitalises your love for theatre. The Monstrous Heart is that play for me.

Mag lives in an isolated log cabin in the mountains of British Columbia. She has built a new life there, recreated herself, un-monstered herself, but everything changes the day her estranged daughter Beth knocks on the door. I don’t want to go any further into the plot because I want you to have the same reaction as I did as the story emerges. Rarely am I on the edge of my seat for a performance, but for this I was not only quivering on the edge but had my hands over my eyes as the play took me somewhere brutal and dark and honest.

This is theatre at its best, characters hewn from pure rage, sharpened and worked to a point by a cool, steely storyline and amazing set design. Cécile Trémolière’s set is incredible: the entire stage area is contained within a claustrophobic box. It’s like looking at a live action diorama, and the effect is to remove any and all distractions from the highly distilled drama. The log cabin has only one way in and one way out. It’s a sparsely furnished place which makes it even more surprising that in the middle of the room is the body of a full-sized, female grizzly bear, laid out on the kitchen table. In the fabulous book of the script, which I was very generously given as a programme, there is set direction from Oliver Emanuel on the bear: “As nearly as possible, this should resemble a real bear. Not a puppet or a toy.” And it really does. I have never seen such an effective prop. It is so big, so undeniable in the centre of the stage that it sucks in all the emotion around it and becomes a metaphor for nature, for murder, for monstrousness, for maternity, for instinct, for brutality, for the unknowable and uncontainable element of nature that we are all made of. It reminds us of the age-old question, constantly reiterated throughout the play: is it nature or nurture that shapes us? 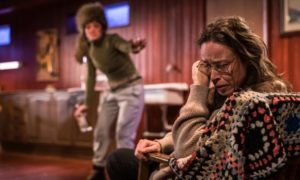 Christine Entwisle’s Beth is both terrifying and heart-breaking; she moves around the stage like a dangerous animal, clawing into the past and dragging out the truth. This raw nature is perfectly countered by Charlene Boyd’s Mag, who shuffles and scrapes away at herself, and is only enlivened by the rage ignited by Beth. The performances are intense, a sustained gruesome, electric jangle of emotion explored through long taut pauses and explosive language, building to a fever pitch with an exhausting drive.

It was interesting to read the script and compare it to the staged production. It gives an indication of how writers, producers, designers and actors work together to bring a production off the page and how much of that production is laid down in the initial, undeniably beautiful and clever dialogue. Emanuel is an excellent writer with an impressive track record and it shows in this brave, boundary-pushing production. It blew the theatre cobwebs away and reminded me what is possible when theatres use talented writers to create a vision. Go see it. 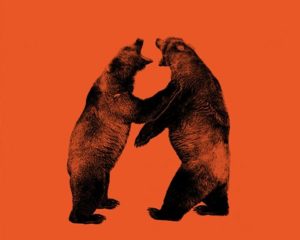 The Monstrous Heart is at the SJT until October 19, 2019. For more information, click here.