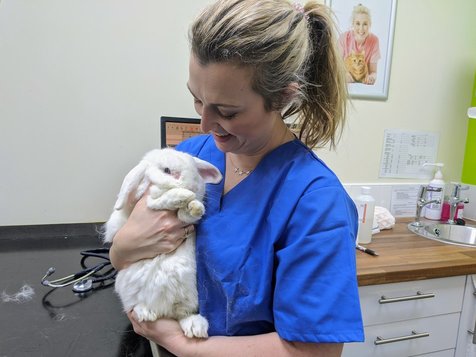 If you’ve never turned on CBBC to keep little ones entertained while you inhale a pint of tea, you may not have had the good fortune of stumbling across The Pets Factor.

This BAFTA-nominated show follows the work of four extremely likeable vets (Cat, Cheryl, Rory and James) as they treat the nation’s pets in their practices across the UK. While it airs on a channel aimed at five to 12-year-olds, it would be equally at home in a prime time evening family viewing slot, perfect for anyone after a bit of drama, laughs and a therapeutic number of fluffy kittens.

With its seventh series now out and new vet Fabian joining the line-up, I seized the opportunity talk to Cat Henstridge about the show and her life as a vet. My nine-year-old daughter, a massive fan of The Pets Factor and an aspiring vet, was also on hand (along with her pet guinea pig) to ensure the target audience’s burning questions didn’t go unasked.

Charlotte Oliver: When did you decide to become a vet?

Cat Henstridge: I decided to become a vet when I was about 10-years-old. I come from a long line of doctors. My mum’s a doctor, my grandmother was a doctor and we’ve loads of medical people in the family, but I decided that I liked animals better than people so I made that decision quite young. My first pet, just like yours, was a guinea pig after much nagging (much, much nagging) and it all just snowballed from there. I think my mum has always hoped that I would change my mind and follow her steps into the medical profession, but I just never did.

Daughter: Did you have a lot of pets as a child?

CH: Once we’d broken through the barrier and got the guinea pig, it all spiralled from there and next, I think, came some chickens because my dad, who’s never been very animal-orientated, was like, ‘well, at least they’ll do something useful,’ and then, after much, much nagging, I persuaded my parents to buy me a pony. And then a dog. And then some cats. 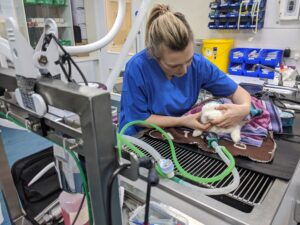 Charlotte: [daughter stares at me pointedly]. Is being on The Pets Factor really fun?

CH: It is really fun and not something I expected to do when I started my veterinary career, but I’m really pleased that I am doing it. We’re just doing our normal day with a camera following us, so that bit’s not actually that different, but all the other stuff around it, that’s what’s been really interesting and fun.

Daughter: Do you enjoy the gory parts?

CH: Yes, they’re my favourite bit. I love the gory bits. I’m sure you see how excited I get when an abscess comes along or there’s some poo or we have to drag something disgusting out of a dog’s stomach or something like that. A lot of people think that being a vet is just cuddling kittens and it is, but a lot of it’s really smelly. There’s lots of poo, there’s lots of wee, there’s lots of vomit and then if you’re a large animal vet (which I’m not) then there’s loads of poo – they’re just wading through cow poo. But that’s why we love it, that’s what makes it interesting.

Charlotte: Well, you’ve definitely not put my daughter off yet. What’s in store for viewers in the new series of the show?

CH: Well, obviously, we’ve got Fabian. Fabian’s done a huge amount of what we call ‘exotic’ work – we class anything with feathers or scales as ‘exotic’ – so he’s going to be doing a lot of that. We’ve got rabbits, dogs that eat stuff they shouldn’t, ferrets, cats that get themselves into scrapes, all sorts of things. Tortoises…

Charlotte: Is there one moment that stands out for you from this new series?

CH: There’s one little cat that was really unfortunate. She was playing with her human sister and accidentally got under her feet and got some teeth kicked out. The poor little girl felt terrible about it, but it was quite an interesting thing because it was something completely out of the blue and we were able to fix it, which was really nice. The cat’s going to be completely fine but that was something I’d never seen before.

Daughter: What are the right noises for a guinea pig to be making?

CH: (unfazed) Okay, here’s my guinea pig impression: Wheeeeeeek! WHeeeeeek! Yes, so they wheek and they chitter, that means they’re really happy. I do think guinea pigs are the best pet because they’re so talkative and so interactive. They let you know exactly what they want and when they want it, and they don’t give up until they get it. 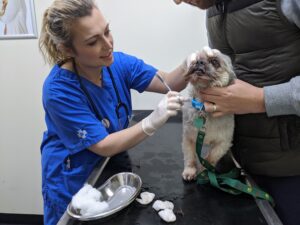 Daughter: Can guinea pigs eat the leaves on top of carrots and, if so, how many at a time?

CH: Yes, carrot tops are edible (humans can eat them too) but the most important thing with a guinea pig and their diet is that they must eat lots of hay and lots of grass. They have these big old weird teeth that grow all the time and are designed to chew on things that are really super-tough and if they didn’t have teeth that grew they’d quickly grind their teeth away to nothing. So, in order to keep their teeth healthy and ground down they need to eat lots of hay.

And the other interesting thing about guinea pigs is that they’re like people and they can’t make vitamin C. Other animals can just make it in their bodies but we can’t and guinea pigs can’t so we have to eat it, so fresh things are really important, things like carrot tops would be full of vitamin C and really good for them. About 80 per cent of their diet has to be hay and if you give them fresh things like carrot or carrot tops or broccoli or peppers or whatever their favourite is, but the important thing is not to give them too much so that they have to eat the hay – a pile of hay about as big as they are every day.

Daughter: What was it like when you saw the capybara at the zoo?

CH: Aw, that was amazing. That was one of my favourite things that we’ve ever done. We took an X-ray of its head to check its teeth and everything were fine, and if someone had taken that x-ray and just shrunk it down a bit and showed it to me, I wouldn’t have known that it wasn’t a guinea pig, so the capybara was really cool. I really enjoyed that day. 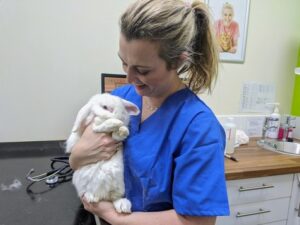 Daughter: What’s the strangest thing you’ve had to pull out of an animal?

CH: Well, we pull all sorts of things out of animals as you’ve no doubt noticed from the show. The weirdest thing that I’ve pulled out on the show is a glove out of a dog. The weirdest thing I’ve pulled out of an animal in my own time was a dog who had eaten a doll that was about six inches high and a perfect representation of a baby. This dog had eaten one and somehow managed to swallow it whole.

It had been sick on and off for a while and we finally x-rayed its tummy and the x-ray was one of the best I’ve ever seen because these baby dolls are so lifelike and it just looked like this dog was pregnant. We got it out and washed it and, because it was plastic, it was pretty much fine. So yeah, a little doll that made the dog look like it was pregnant is the weirdest thing I’ve ever x-rayed and then removed.

CH: I’m with you all the way, my favourite animal is a guinea pig. I do really love them. I think they’re the best pets especially for children. You can pick them up and play with them and they’ll let you cuddle them and they’re quite easy to look after. I do love a guinea pig.

Daughter: When I grow up, I’m going to have loads of animals.

CH: Well, I think a house isn’t a home without a pet, is it? You’ve just got to have enough time to look after them properly. That’s the key. 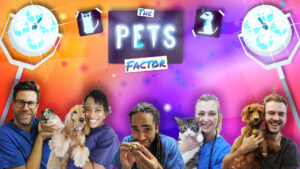 The new series of The Pets Factor is on weekdays at 4.40pm on CBBC (can be enjoyed with or without children).