Cross-stitch is a much-loved art form which comes with certain connotations, namely of a homely, old-school, maybe slightly twee craft which enables its practitioners to immortalise pets, flowers and warm, welcoming slogans. Arrestingly, then, a new designer has been applying it to a raft of unexpected and often distinctly Northern subjects, from The Fall and New Order to The League of Gentlemen and The Royle Family.

They’re all the work of 8bitnorthxstitch, Michelle to her pals, who was first inspired to have a bash three years ago courtesy of her daughter.

“She’s always cross-stitched since she was a kid, and as an adult she’s made quite a lot of money creating cross-stitch patterns and selling them,” Michelle says. “I kept saying to her that Manchester bands would go really well but she’s not that interested in music. In the end she said ‘well, why don’t you do it then?’” 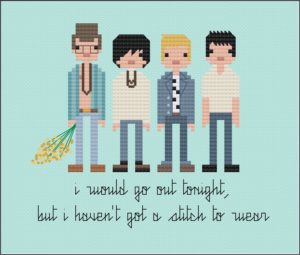 One potential hurdle was that Michelle had never actually done cross-stitch before. “I’ve not been craft-orientated at all. I don’t know what possessed me. I think it was a challenge. So I drew the first four designs, which were all bands that I loved – The Stone Roses, The Smiths, Joy Division and New Order. Back then it took me about two weeks to do each one.”

A mutual friend showed the finished patterns to the manager of the Royal Exchange Theatre shop, who was keen to stock them. That first batch of prints sold out within days and 8bitnorthxstitch was duly launched. “Then I let my imagination run riot. I only really design stuff that I absolutely love, so I just went off in tangents. I didn’t have a business plan or anything. I still haven’t.”

Today 8bitnorthxstitch has an online Etsy store offering well over 100 patterns with more being added all the time. As well as the Royal Exchange, they’re now available from the shops at HOME, The Lowry and Gallery Oldham. In particular, Michelle is doing a thriving line in greetings cards versions of her patterns, though as she cheerfully admits, “they were really born of an accident. The design software that I use creates a finished piece showing you what your cross-stitch will look like. So I was just looking at the patterns thinking that they could look really good as cards. Again, it just built up from there.”

What really makes the 8bitnorthxstitch designs work is that they’re highly distinctive. Partly that’s down to their overall aesthetic. As the name suggests, they’re rendered in a loose approximation of old-school blocky computer graphics, as though all the subjects belong in the same funny, brightly-coloured universe.

“They’re so simple”, Michelle explains. “If you strip back the hair and the clothes, the faces are all the same. It’s like Playmobil or Lego, they’re identikit. As human beings, though, I think we want to find recognition. When I started off by doing The Smiths I thought, if you put a quiff there and a mop top there, before you know it, it does look like The Smiths. I’m really into cute things, Japanese stuff and Kawaii, and that’s what my stuff reminds me of.” 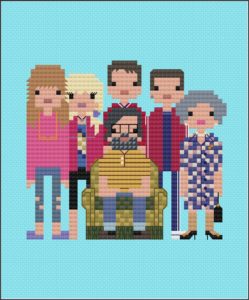 There’s also that ‘north’ bit in the name, which Michelle says is no accident. “I’m from Salford and the North has always been incredibly important to me and my identity. Growing up, all the people and the work that I admired were strongly northern and I wanted to celebrate that.” This explains the roll-call of northern heroes she’s since rendered in cross-stitch, taking in John Cooper Clarke, Jarvis Cocker, the Factory Records mob, Vic & Bob, The Beatles, Alan Turing and the Brontë sisters. There are plenty of other, non-northern subjects too, though, such as David Bowie, Kate Bush, The Wicker Man and a whole host of British sitcoms, but each one is evidently dear to Michelle herself.

Unsurprisingly, then, her own highlight was a proper labour of love – a spread depicting all 42 amassed ex-members of The Fall.

“I’m really pleased that I did that. It was a big achievement. I didn’t get round to it for about a year because I was a bit scared and it was really huge. I think in my head that Fall piece was always what I was working towards. They’re my favourite band in the world.”

Eventually Michelle knuckled down, and around 45 hours of stitching later, it was complete. It’s since been praised by some of the ex-Fall members in question, a couple of whom have even commissioned Michelle to create bespoke private pieces. “Even though I’ve not spoken to them about The Fall, it’s just nice to meet them. I’m hoping to meet them all one day, so maybe I’ll tick them off.” 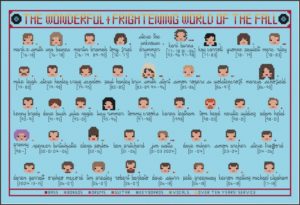 Future projects for 8bitnorthxstitch include designing a set of cards for Manchester Art Gallery relating to their collection and the poster for a Royal Exchange Theatre production. Michelle has already done official commissions for Elizabeth Gaskell’s House, the Brontë Parsonage, the Working Class Movement Library and Manchester International Festival’s True Faith exhibition. She’s open to any private cross stitch commissions too, though there have been occasional dead ends there. “Someone once asked me to do the entire cast of [BBC daytime soap] Doctors, but he never followed up on it,” she reveals.

For now, Michelle is gradually working through her personal wish-list of patterns and building up the range.

“People have said to me ‘now you’ve got the concept you should hire people to do it’, but that just feels like capitalist bullshit. I’m doing it purely because I enjoy it and I’ll stop when I’m not. I’m just glad that people like them. It’s not really a business, it’s just me making something that I love, something that I hope somebody else will love and passing it on to them. For me they’re like love letters, stitched love letters, from one geek to another.”