Train Drain, or what in the name of all that is holy is going on with our rail network?

Drew Tosh February 3, 2018 Uncategorized Comments Off on Train Drain, or what in the name of all that is holy is going on with our rail network?

“I strongly object to paying £27.50 to walk the length and breadth of the train with a sausage in a plastic box.” – Kitty, Victoria Wood As Seen On TV

The advert once said the train was supposed to take the strain. Now it’s the cause of it.

As our rail services get worse and ticket prices go up, we are helpless. Those of us who don’t drive, or ditched the car to embrace the train, still have to get to work. The rail system has got us by the short and curly beverage cart sandwiches.

I paid £135 for a recent visit to Scotland. ONE HUNDRED AND THIRTY-FIVE POUNDS. I only wanted to pop over the border not to Bora Bora.

Still, for that amount of money at least I could expect an A1 travel experience. Couldn’t I?

I started in Manchester on a train that didn’t actually move for half an hour. An overhead line issue apparently. Rail works on the West Coast line already meant I had to go via York to change for Edinburgh but, by the time we staggered into York, the connection was long gone. When the next one appeared, there were so many other delayed passengers crammed inside I had to stand in the aisle the whole way as all attempts to reserve seating had been abandoned.

Finally in Edinburgh, my last connection was also delayed. I can’t tell you why because of the completely indecipherable tannoy announcement that echoed across a chilly Waverley Station. Do they really not know we can’t hear those addresses? 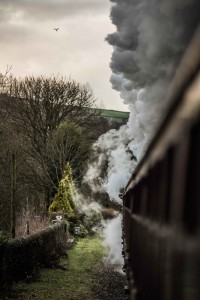 I returned on New Year’s Eve and the Glasgow to Manchester connection left bang on time. Speaking of bangs, about 15 seconds into the journey a loud one rocked the train, sparks flew outside the carriage and we shuddered to a halt on the bridge.

I was beside party girls, already well-oiled (unlike our train) and heading to Carlisle to see in the New Year. After 45 minutes on a freezing train, still occasionally banging and sparking, we wondered if we’d start 2018 jumping for safety into the River Clyde.

The conductor eventually made his way to our carriage. He was a font of information. “I don’t know what’s going on. No one’s told me anything.” This was brave of him to say, especially to a bunch of pissed off, pissed-up Glasgow gals in search of a party.

It’s important not to shoot the messenger, though. I witnessed several embarrassed and harassed rail staff on my travels. Cannon fodder sent off to appease the angry masses. They know the service is crap, but it pays their wages and defending the indefensible is part of their job description.

We couldn’t get off the train and walk the few feet back to the station as there were now trains behind and ahead blocking us in. One of the party girls yelled, “we’re gonna be on the news!”. I was thinking about the cost of this trip and imagining withdrawing £135 from the Cashpoint and ripping it into a million pieces.

Eventually, we reversed back to the station where a Virgin train allowed us to board. Standing room only again. The ticket guy advised changing at Preston then gave me the incorrect platform number. I was on to them by now, however, and discovered a faster connection that finally got me to my destination a mere nine hours after I set off.

We live in a world where even the most remote, weather-beaten countries manage to operate an efficient train service. A world where space travel is no big deal. Yet in ‘Great’ Britain, one flake of snow or AWOL cow brings the entire network to a standstill. Many of the trains aren’t even fit for service.

Yet we continue to pay through the nose for a pitifully poor service. We still stand for it – in my case all the way there and back.

Despite being promised a refund I received a brief letter five weeks after the event asking me to confirm times of my return journeys. How often do trains explode that they didn’t have sufficient information from my first letter (sent with my tickets included)? Their letter had two spelling errors in it.