Review: One Man, Two Guvnors at The Lowry, Salford 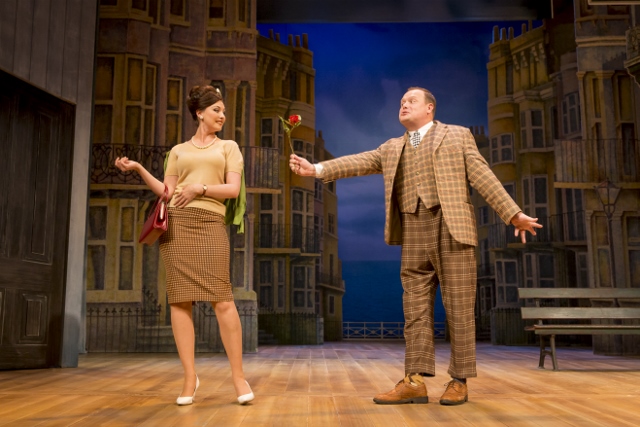 If you haven’t encountered it already, the key thing you need to know about One Man, Two Guvnors is that it is fun. Like, loads and loads of fun. An uproarious two-and-a-half hour barrage of fun. It’s certainly a far bigger helping of unalloyed entertainment than you’d generally expect to see associated with the term ‘National Theatre touring production’. 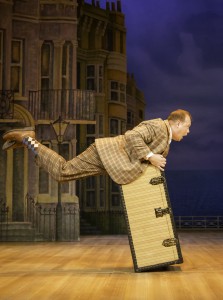 If it’s possible to wrestle the phrase away from Jim Davidson, the show resembles a sort of adult pantomime, which is to say it’s steeped in the ancient performance tradition of commedia dell’arte. The tradition in question was looking slightly dog-eared when Venetian playwright Carlo Goldoni wrote his comedy Il Servitore di Due Padroni (that is, The Servant of Two Masters) in 1746. Here, Yorkshire-born playwright Richard Bean has riffed on Goldoni’s work and rewired the form for the modern age – or at least, the recent past.

It’s set in 1963, the age of the Krays, the Great Train Robbery and the ascent of The Beatles. Shuttling between London and Brighton, it hinges on Francis Henshall, a rough-hewn, happy-go-lucky clown who’s working as a minder to small-time gangster Roscoe Crabbe. When the opportunity arises to look after an additional client, he can’t help himself. Sure enough, as per the title, Francis winds up with two bosses to keep sweet – and, ideally, keep separate. And if you think that sounds like a farcical situation, you’ve hit the nail on the head.

It’s very broad, stylised stuff, with set-piece piled on after set-piece, and it deploys every trick in the theatrical book – up to and including on-stage band – to tickle the audience’s fancy. But it goes about it with enormous aplomb, and the result is irresistibly funny. The cast, taking in Emma Barton, Jasmyn Banks (both ex-Eastenders) and Norman Pace (ex-of Hale and) handle the material winningly. Patrick Warner is a hoot as Francis’s second boss Stanley, a prototype Hooray Henry, and those right down the cast list demonstrate tremendous, admirable accomplishment, too. Either they’re a very happy, comfortable touring company, or they’re doing a good job of acting like they are. Frankly, from the stalls, it doesn’t really make any odds. 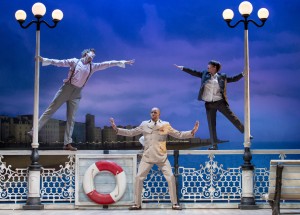 But indubitably the true star here is Gavin Spokes as the hapless Francis. It’s hard to overlook that the role was first forged by James Corden, with career-defining, award-winning success. That Stokes manages to make the role his own, and establish a radiant rapport with the audience, is very much to his credit, particularly as he isn’t simply a face that people recognise from off of the telly. As soon as Francis is centre stage, the play is flying. In fact, when his presence is used more sparingly – which includes some more expository bits of the second act – he’s sorely missed.

If one were feeling curmudgeonly, one could point out that it’s not really a play that’s about anything. There are knowing nods along the way towards the politics of class, gender and post-1963 Britain, but nothing more. These characters are not ‘three-dimensional’. They don’t have intriguing ‘back-stories’ and they don’t go on enlightening ‘journeys’. Instead, everything wilts before the onslaught of Francis and co’s comic antics – and when they’re as genuinely funny as this, who gives a jot? No, One Man, Two Guvnors is, unashamedly, a hoot. It’s designed to be relentless, cheeky, cartoonish fun – a true theatrical entertainment – and it delivers that in spades.

Where: Lyric Theatre, The Lowry, Salford Quays and touring