Liverpool: The Cathedral That Never Was

Alfred Searls January 17, 2015 Duckspeak, Northern Soul writes... Comments Off on Liverpool: The Cathedral That Never Was 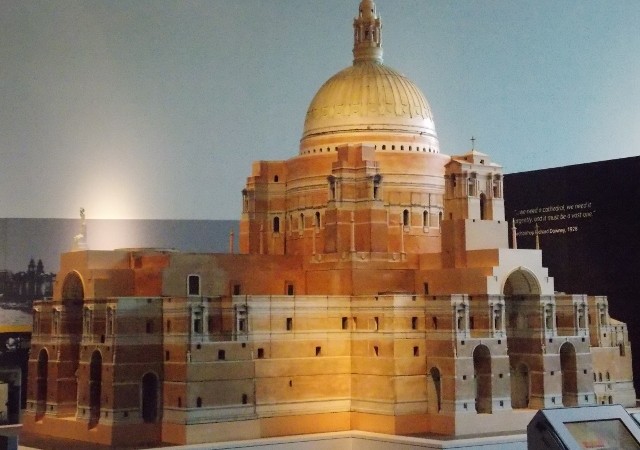 The thought of what might have been exerts a powerful hold on the imagination. To support our boundless appetite for the game of ‘what if’ we build elaborate castles in the air; castles erected purely on foundations of conjecture, and constructed from materials found in our minds.

Very occasionally we are presented with a wealth of materials with which to buttress our imaginary constructs. There can be few cases in which such dreams are so richly supported as the astonishing plans, drawn up in the 1930s by Sir Edwin Lutyens, for a monumental Catholic cathedral in Liverpool. Had it been built, this vast yet elegant building would have dominated the Liverpool skyline – and seen the city become home to the second largest place of worship in history. In today’s prices, it would cost a staggering £3 billion.

But the construction of this mammoth building was not a new idea. The project’s considerable architectural pedigree began in 1853 when that most prolific of ecclesiastical architects, Edward Welby Pugin, was commissioned to design the new cathedral. At this time the population of Liverpool was rapidly expanding and many of the new arrivals were Irish Catholics, bringing not only the need for a new centre of worship but also the resources with which to construct it. However, the arrival of these newly-minted Liverpudlians, fleeing the shadow of starvation cast by the Great Famine, would also be the reason for the project’s eventual abandonment.

As construction began on the site of St Edward’s College in the city’s Everton district, it became clear to the diocese that the temporal needs of its greatly expanded flock were beginning to eclipse the spiritual need for a place to worship. Thus, with only its Lady Chapel completed, funding for the project was diverted towards the education of Liverpool’s Catholic children, and the site converted into a parish church. Some 60 years would pass before work began anew – and there would be no shortage of enthusiasm. 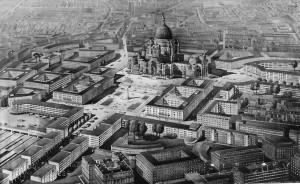 Even before his appointment in August 1929, Liverpool’s new Archbishop, Richard Downey, planned to revive construction of a major Catholic centre of worship in the city. The scale of his ambition was made clear in an interview he gave to Time magazine that year: “Hitherto all cathedrals have been dedicated to saints. I hope this one will be dedicated to Christ himself with a great figure surmounted on the cathedral, visible for many a mile out at sea.” To this end he had already secured the services of the greatest British architect of the day, Sir Edwin Lutyens.

With his grand designs for the newly-completed government district of New Delhi (the new imperial capital of India), Lutyens had already secured a place in architectural history. There his vast classical designs, into which he had successfully incorporated local Indian elements, had been hailed as the monumental achievement of an already monumentally successful career. Yet, judging from the extraordinary design he and Archbishop Downey presented to Pope Pius XI in Rome, he clearly wished to leave an even greater mark in architectural history.

The enormity of the Lutyens design, a design which would have seen Liverpool acquire a cathedral second only to St Peter’s in Rome, defies the imagination. The vast dome would have topped out at a staggering 520 ft, more than twice the height of St Paul’s in London and 60 ft higher than St Peter’s. In terms of diameter the Lutyens Dome had St Peter’s beaten once again, 168 ft to 137 ft. Standing on a hill overlooking the city, the cathedral would have completely dominated the Liverpool skyline. 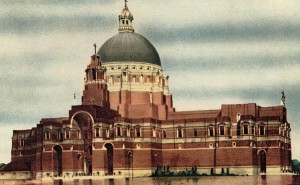 The sheer scale of the building is rather disturbing. The only contemporary design to match it in size was the Volkshalle, the proposed centrepiece for Albert Speer’s plan (thankfully never realised) to turn post-war Berlin into a ghastly Hitlerian wonderland.

But a glance at one of the numerous watercolours, depicting how the Lutyens design would have looked on completion, illustrates the genius of the man and his ability to humanise monumental structures through the use of style and materials. The institutional coldness of classicism is salved by Lutyens in his incorporation, at all levels, of the Byzantine style within his design. And the building’s vast reddish-brown brick walls, occasionally leavened with elegant lines of silver-grey Irish granite, would not have intimidated visitors in the deliberate manner of Speer’s cold, clinically dehumanising behemoths. Indeed, the warmth of these vast walls would surely have beckoned passers-by and emboldened the would-be catechumen among them.

Evidence of this skill, of this geometric humanity, is found in three great entrances to the cathedral into which Lutyens had clearly incorporated his design for the Thiepval Memorial, the monument to those British soldiers who fell at the Somme and have no known grave. In using brick as the prime material at Thiepval, as he intended to do in Liverpool, Lutyens created a memorial that was not only vast, as befitted the scale of the casualties, but one which demonstrated an absolute understanding that the individual is the basic unit of life – something classicism rarely reflects. 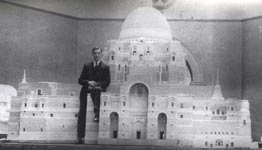 To further aid the public’s imagination, an enormous 12 ft high architectural model was built and unveiled to great acclaim in 1934 at the Royal Academy. But, somewhat portentously, even with a staggering £10,000 budget the model proved too expensive to finish.

By the time the foundation stone was laid the cost of the new cathedral was estimated at £3 million, an enormous sum at the time. The funds had been raised by the city’s Catholic community and so, on Whit Monday 1933, work on the huge cathedral began on the site of the old Liverpool Workhouse on Brownlow Hill. Slowly the foundations were laid and the enormous complex of brick vaults began to take shape. The outbreak of the Second World War brought work on the site to a standstill and during the Liverpool Blitz the completed sections of the crypt were pressed into service as public bomb shelters.

Although the crypt was completed after the war, the rest of the project went into hibernation as a heavily damaged city rebuilt itself. With both labour and materials in short supply, construction costs rocketed and by 1953 the estimated cost of completing the cathedral had risen to the impossible sum of £27 million.

While it was clear that the project could not be completed to Lutyens’ original plan, attempts to scale down the design by Adrian Gilbert Scott, brother of Giles Gilbert Scott (the architect of Liverpool’s Anglican Cathedral), proved unpopular. And so in 1959 Archbishop Heenan took the decision to break with the past and announced an international competition for a new design for Liverpool’s new cathedral – a modern design for a modern city – which, given that a more traditional design would have been seen as a shadow of what might have been, was probably a wise choice. Today Sir Frederick Gibberd’s imaginative and curiously elegant modern cathedral stands on Brownlow Hill and, like its Anglican sister at the other end of Hope Street, it is a much loved landmark and a valued spiritual oasis. 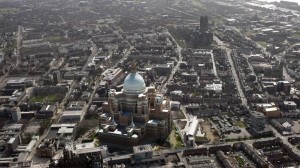 But it’s still possible to glimpse what might have been. Lutyens’ original 12 ft high architectural model sits proudly in the Museum of Liverpool, fully restored by experts from the Walker Gallery with its interiors fully completed to Lutyens’ original specifications. And beneath the modern cathedral you can still walk through the brick and granite crypt, so vast that the building above barely covers a quarter of its total surface area. There you can imagine the wonder of the world that was Lutyens’ dream…the cathedral that never was.

Find out more at: