Up close and personal with a Manchester icon: Afflecks

Caleb Everett May 14, 2019 Arts, Heritage, Shopping Comments Off on Up close and personal with a Manchester icon: Afflecks

Afflecks (or Affleck’s Palace as was) is a Manchester institution. With a history going back to the 1860s, the modern day indie emporium dates to 1982. Northern Soul’s Caleb Everett joins a new tour exploring its secrets.

Roaming Manchester at a funeral pace I rarely take in much of the city, so a tour of one’s home turf should inject an Easter resurrection of interest. A rainy day, headscarf at the ready, I join the Secrets of Afflecks Tour outside Fred Aldous in Stevenson Square – Mancunian street-life whipping and drilling around us, the pneumatic drills somehow drowned out by gaudy advertisements.

Manchester historian and writer Jonathan Schofield begins his tour with toasty-warm Northern humour, turned out all Barlow-family smart and visibly excited by every red brick refinement of Manchester he talks about – this is passion, not acting. I can listen to anybody pontificate with passion on almost any subject, with the exceptions of meat-based cookery, sport and U2.

There’s a tourist-friendly introduction equipped with tit-bits about the oldest building in Manchester, Stevenson Square itself and the Pankhursts (my favourite remains Sylvia whom Lenin deemed “too left”). My own love of Manchester’s lined-face nestles with the imperishable Gothic of it all – of which I love but know little detail. It’s how I know it’s love – it’s unrequited and without desire for detail. Either that or inertia. 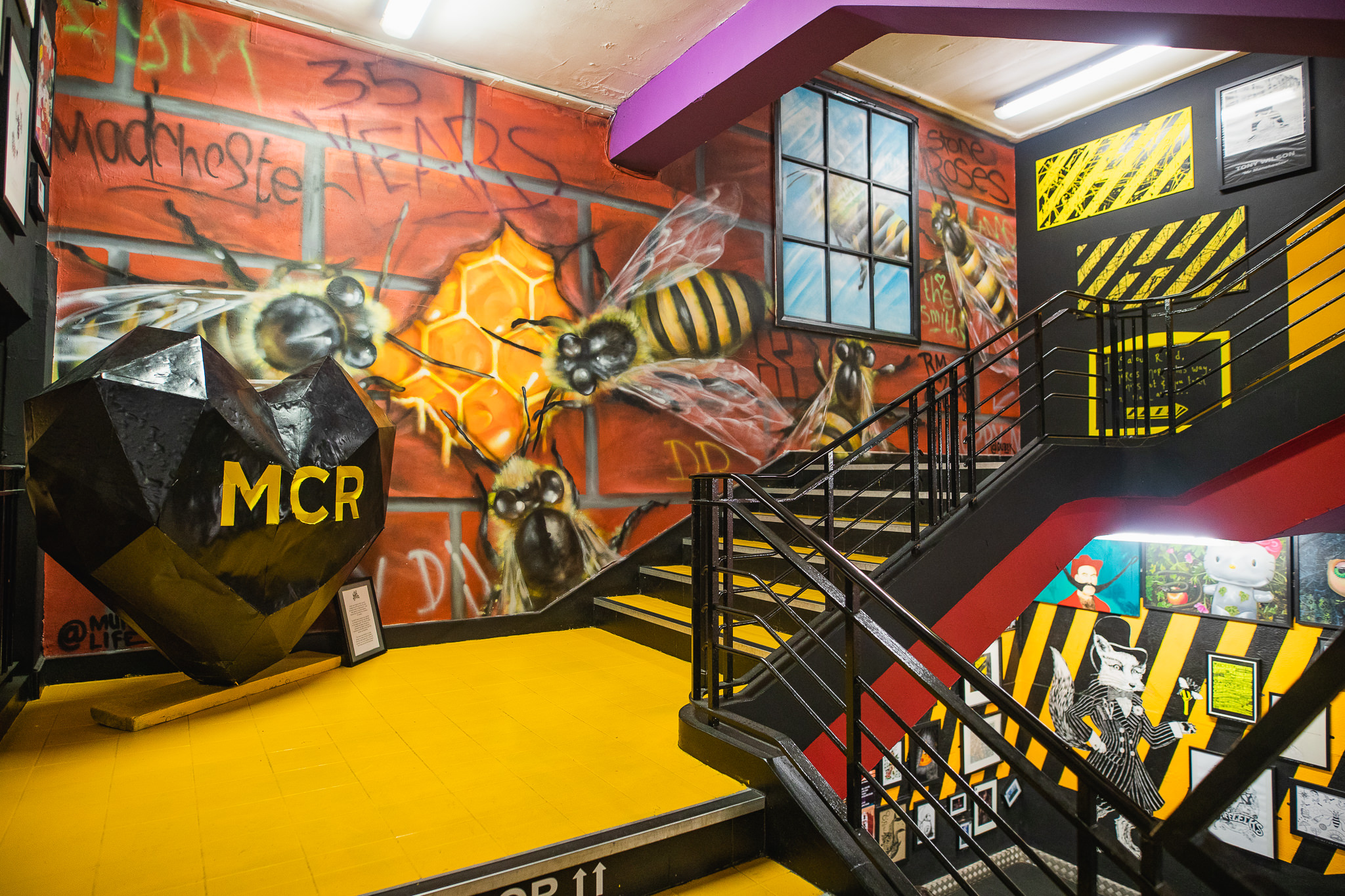 The stories behind the buildings are fascinating. The past. The architecture of modern Manchester isn’t about community or engaging with those whose lives are lived without a chauffeur. Take the concrete pigeon zoo of Piccadilly Gardens, you won’t steal a moment of happiness there. Not even in Greggs will the workers crack a smile and they’re cheery everywhere (“I’m still the same, it’s Manchester that got small” – copyright Norma Desmond).

Schofield isn’t prompt card performing and doesn’t plummet into “ummmm” and “errrrrrmmm” at questions from the group. We saunter around the Northern Quarter, the artwork adorning almost every building so easy to miss, with prostitution and even the poet Homer receiving noteworthy mentions. There’s a stop outside the Abel Heywood pub, named after the radical 19th century Manchester Major who was part of, what Schofield calls, the “shock city of the age”. Heywood was insistent on the free press, for which he was briefly jailed, and spent a decade of his life working on the Town Hall Project which would, eventually, present the city with its handsome civil cathedral.

I used to drink in the Abel Heywood when channelling my inner-hipster and recall there was a charming barman with thighs the size of Bolton who once told me the pub was haunted by the ghost of George Best. Now, I’m not sure I believe in the Derek Acorah end-of-town hauntings but didn’t want him to leave, so asked how he knew it was George Best. “Well,” he huffed, “I’m a United fan so I should know” then promptly left to serve overcooked veg and gravy-you-could-slice pub grub. 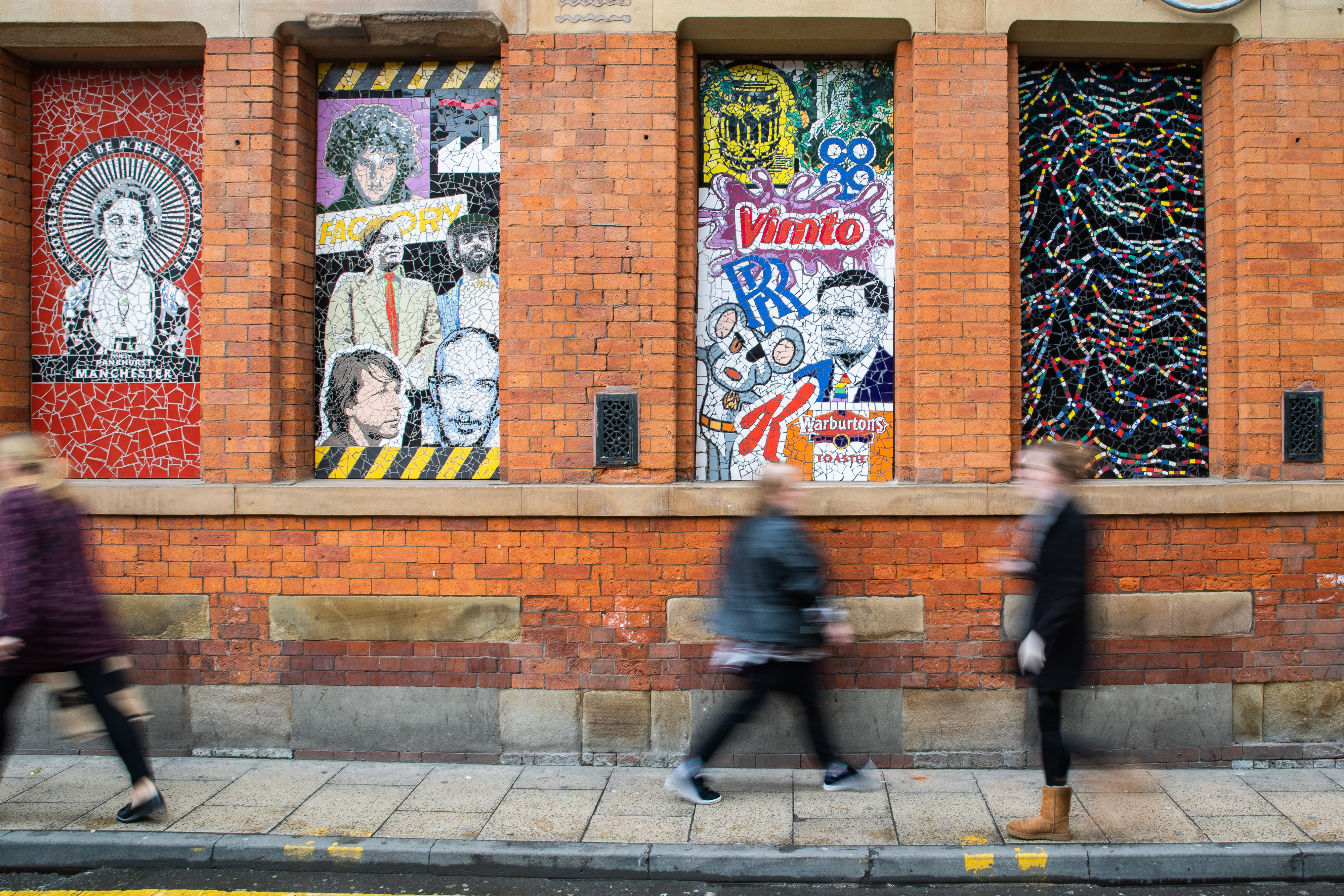 Arriving outside Afflecks, we admire the Mark Kennedy mosaics, featuring Coronation Street characters, homegrown talent (including Vimto) and Bob Dylan (it was in Manchester, during his first ‘electric tour’, that Dylan was called Judas by an irate folk music fan). Again, the history of the building and the surrounding area is when Schofield is in bright smile mode, both knowledgeable and entertaining. We enter Afflecks, visiting a few stall owners who share anecdotes, mostly about famous shoppers who popped in for posters, earrings and hemp headbands over the past few years. It’s entertaining enough but I want the ‘secret’ Afflecks, the dusty old-school spookiness of the floors closed to the public. Perhaps Lady Gaga shutting off all floors for a shopping spree was the secret? We’re ushered into a stairway that leads to a floor off limits to customers where we’re told to expect ghost stories and torrid tales. Adoring trashy tales and gossip, this excites me but it’s this part of the tour that, for me, falls flat and is over with bullfighter haste. 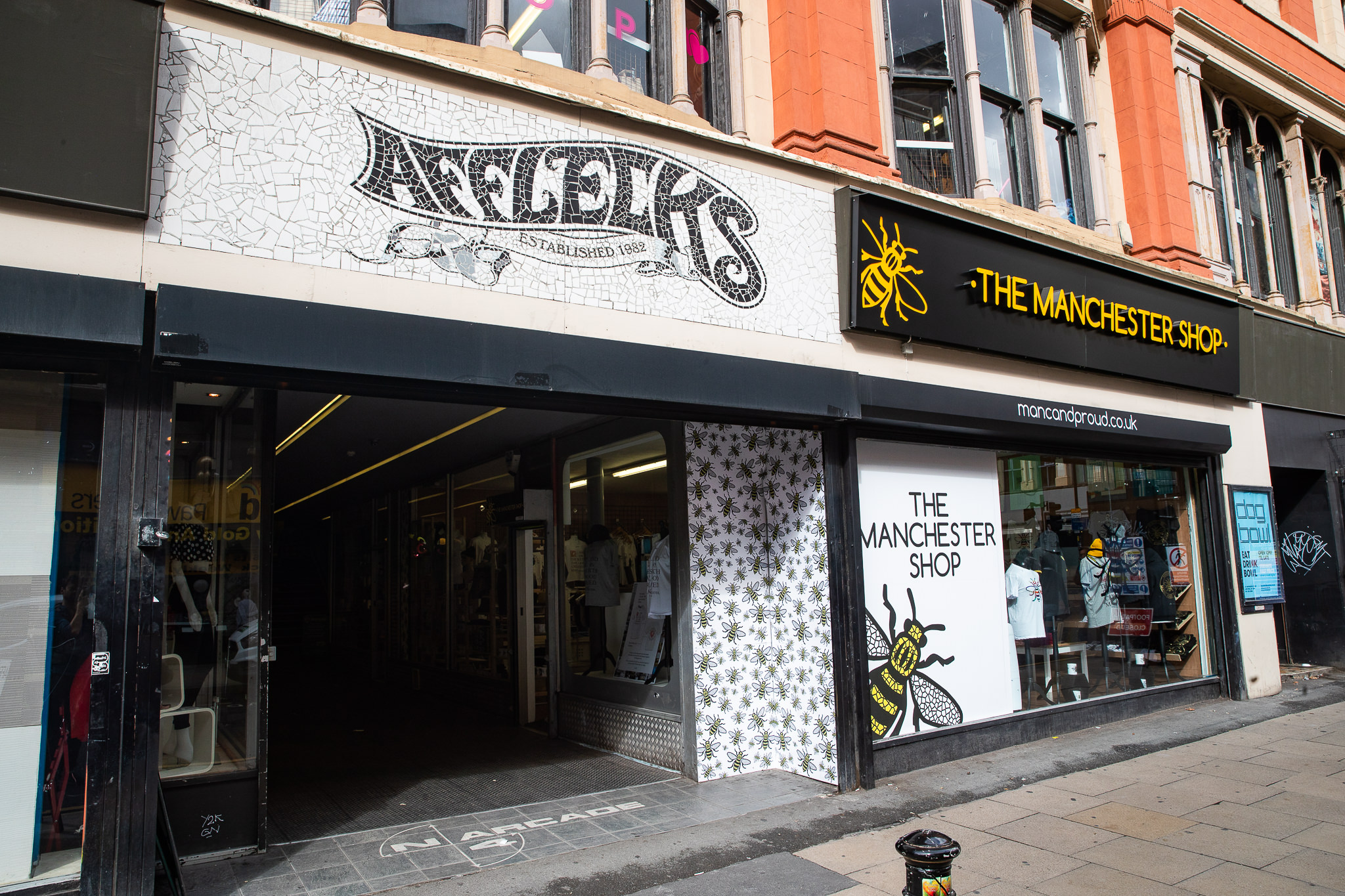 It’s a minor gripe, though. No matter your reason for going on the Secrets of Afflecks tour, you’re certain to enjoy an extremely entertaining stroll around Manchester’s Northern Quarter with an affable Mancunian storyteller. While the Afflecks section of the tour was a little underwhelming, it was not without charm thanks to Schofield’s passion for history. Of course, Afflecks itself is worth exploring on your own. Many of the incense-flavoured boutiques are turning out the very best of desirable things away from the lacklustre high streets. It’s also home to a superb vegan café run by the delightful John and Gina. After the tour I sit in said café and think, yes, Schofield is adept at making the pavement-gazers of the world unite and look up. 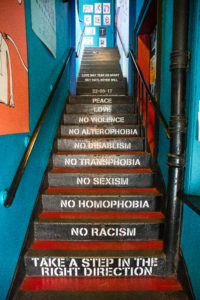 Afflecks wants fans to share their memories and photographs of Afflecks for a publicly curated exhibition that’s planned for the Summer. Through the Eyes of Afflecks will be a photographic history of the building to celebrate the 11-year anniversary since local property company Bruntwood took it over and saved it from closure. Anyone with stories or photos to share should email lecia@siobhanhanley.com