What’s on in Chester: an insider’s guide

Angela Ferguson August 14, 2016 Arts Comments Off on What’s on in Chester: an insider’s guide

For a city famous across the globe for its rich past, Chester is very much focused on the present and the future when it comes to its diverse cultural offering.

Take, for instance, the hotly anticipated £37 million Storyhouse cultural centre set to open in Spring 2017. If the opening of HOME, Manchester’s new arts complex, is anything to go by, this Chester initiative will breathe new cultural life into the city.

Storyhouse will house two theatres, a boutique cinema, a library, café and bar. It will offer a 50:50 mix of nationally produced and homegrown productions. And it will, according to one leading light of Chester’s arts scene, become a focal point for residents and visitors, galvanising and complementing the city’s culture programme.

“I think that, despite what is often said about there not being a lot going on in Chester, there has actually always been a lot going on but without that physical focus of a purpose-built venue,” says Chester composer, musician and theatre director Matt Baker. He believes that although much is already happening in the city in cultural terms, it isn’t always easy for people to keep abreast of events.

“We are very strong on grass roots participation in Chester. We always do very well in terms of audience numbers. I think with the new theatre arriving, hopefully that will help, with the new cultural centre being a mothership, if you like, or a sun. When the sun shines on all of those planets that circle it then they become more visible. It will just make it more obvious that things are going on.”

Alex Clifton, artistic director of Storyhouse, adds: “There’s a lot of culture in Chester and it’s absolutely thrilling that Storyhouse is set to open in the Spring and to create a focal point for all of this activity. Chester punches above its weight in lots of areas, including culturally. It’s such a beautiful city. We are a city that people want to travel to, whether they be day tourists or people coming here for longer stays. There’s such a vibrant cultural offer here, something we can be proud of.”

With this in mind, here’s some great stuff to do in Chester over the coming months.

Don’t let the glorious unpredictability of our British weather put you off the idea of open air theatre. Even when the weather is inclement, there’s something magical about cosying up under a blanket and layers of clothes, glass of wine or coffee in hand, to enjoy the thrill of live theatre in the great outdoors.

This year’s Grosvenor Park Open Air Theatre productions are Shakespeare’s As You Like It and The Two Gentlemen of Verona, plus an adaptation of children’s classic Stig of the Dump from award-winning writer Jessica Swale.

The talented cast of actors has already attracted great reviews, transporting the audience from this theatre in the round to a range of far flung destinations, with some enchanting music and singing thrown into the mix.

Get your camping chairs or picnic rugs at the ready and experience outdoor cinema in the stunning setting of Chester’s Roman Gardens. This year Moonlight Flicks has also been extended, with screenings in Frodsham and West Kirby in Wirral. A range of films should appeal to all tastes. You can bring your own food and drink or even have a pizza and a beer brought to your chair. What’s not to like? 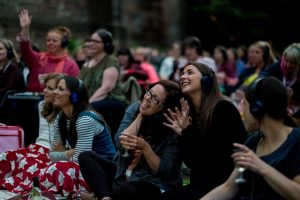 Free themed events for families, looking at everything from space to superheroes, and staged in Chester’s Roman amphitheatre. No booking required.

Theatre in the Quarter

Matt Baker from the Theatre in the Quarter arts organisation is working with writer Helen Newall on a pilot for a major project based on the First World War, entitled For The Fallen. This will involve a community chorus and will be based on original photos, music and stories from the Cheshire Great War Roadshow.

While the final larger scale project will be produced in full in 2018, Baker is staging two smaller scale public performances at St Mary’s Creative Space at 8pm on September 2 and 3.

Matt says: “We’re creating a theatrical, choral and visual piece which is kind of about letting go into eternity the memory of Cheshire people who were in the First World War.”

Chester-based theatre company Tip Top Productions is staging the musical Oklahoma at the Forum Studio Theatre until August 20. (£11 or £9 concessions, £7 some performances). Then from September 15-24 it is putting on a comedy version of classic Alfred Hitchcock thriller The 39 Steps. Expect a tip-top performance from this experienced company, which has a reputation for top notch and hugely entertaining theatre. 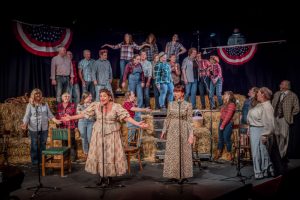 Champions of local music, Flipside Community Radio has organised a family-friendly Summer music festival and fundraiser on August 28 and 29. The fun happens at Kings Acre Farm in Saughall, on the outskirts of the city. The Flipside Campout festival will shine a spotlight on local musical talent and you can expect folk rock, Americana and country blues, along with DJs, poetry, dance and other family-friendly activities. All proceeds go towards the running of the station, which has an eclectic mix of music from its diverse range of presenters.

Performers include Jon Coley, Jeb Loy Nichols and Huw Costin (Torn Sail), Texas Banjo Massacre and The Daymons, alongside DJs who will be spinning tunes on both days.

Tickets cost £12 in advance (age 14-plus) and £15 on the gate and include overnight camping and parkingChester Theatre Club.

Chester’s longest running theatre prides itself on staging a diverse range of plays at its base at the The Little Theatre. Its new season kicks off in September with Richard Harris’s Outside Edge, a comedy centred around a cricket match. (September 17, 19-24/Tickets £9.50 (£7.50 concession).

In October, expect some homegrown drama from the pen of theatre member and award-winning writer Kim Finn, when her Dark Moments trilogy will be staged from October 27-29. The three one-act plays combine black comedy and gritty realism, with subjects ranging from holidaymakers experiencing cabin fever on a night flight to an exploration of isolation and loneliness through the experiences of four neighbours, one of whom is about to die.