Review: What If Women Ruled The World? Manchester International Festival

Emma Yates-Badley July 6, 2017 Arts, It's Not Grim Up North, Northern Soul writes..., Theatre Comments Off on Review: What If Women Ruled The World? Manchester International Festival

I’m struggling to put my thoughts about Israeli artist Yael Bartana’s ground-breaking film and performance project What If Women Ruled the World? into coherent sentences. But a good sign of a thought-provoking piece is that my opinions are jumbled.

Commissioned for Manchester International Festival and created with a team including performance director Vicky Featherstone and writer Abi Morgan, the play is a re-imagining of the ending of Stanley Kubrick’s curious Dr Strangelove, which foresaw a post-apocalyptic future in which dominant male leaders would repopulate the Earth, with ten women allocated to every man. But this time, we’re presented with the opposite set-up, placing women in charge of a world in desperate need of a new vision. Ten women aren’t allocated to every man, rather, the perspective is reversed. There’s one fella for every ten women – and we thought it was tough to get a text back now. 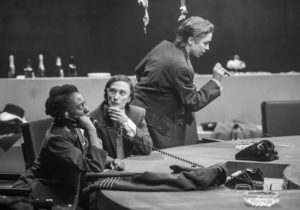 This dramatic new artwork has arrived during a time of unnerving worldwide change. This week alone, we’ve seen North Korea claim a successful intercontinental missile test, and POTUS Donald Trump fire off a string of reactionary tweets into the ether (the internet equivalent of a baby throwing his toys out his pram). What If Woman Ruled the World? is terrifyingly and wonderfully relevant.

The setting is fantastic. I don’t think MIF could have found a better space for the project than the dark, cold, empty rooms of Mayfield in Manchester. The disused railway station is having a bit of a resurgence of late, with trendy food fair GRUB Manchester setting up within its walls. As audience members file in, it’s clear why the organisers suggested we wear comfy shoes and warm clothing. Inside it’s chilly, markedly different from the warm evening, and signifies a change is afoot. We’re about to be taken out of our comfort zone (the booming music akin to something from a Doctor Who episode does little to quell this feeling).

To begin with, the piece has an air of comedy about it. Think more exaggerated carry-on movie than black comedy. There’s women in drag, ‘survival kits’ containing nylons, overly exaggerated accents, and, of course, a stick-on moustache. Don’t get me wrong, I like a laugh, but there’s something about the mickey-taking that doesn’t sit well. I can feel the gentlemen next to me bristle at some of the jokes and pumped-up masculinity.

Maybe I am supposed to feel uncomfortable? After all, this is the way women in power, or in any way, shape or form, have been treated for centuries. As a big joke. But for me, the slapstick comedy falls a bit short. It takes something away from the fantastic scenes that follow. Although, having said that, there is a reference to ‘covfefe’ that has me belly-laughing. 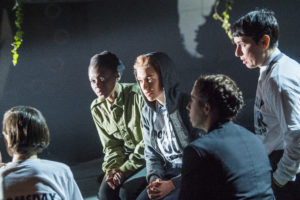 The real show begins after the opening scene, when the five actors begin to talk in poetic, poignant prose about the aftermath of what I presume is a nuclear attack. Skin peels from people in reams, babies are starving, the populace cannot breathe. The words are beautiful, the concept is terrifying.

What If Women Ruled the World? gains back momentum when actors are brought together with five women who are real-life experts in their fields. The line-up is impressive and ranges from economics to archaeology, feminism, development, and environment. Each night, the cast will be joined on stage by a different group of female specialists: scientists, politicians, activists and thinkers of global reputation which means that each show, and its outcome, will be different.

Gone is the comedy (although not completely with one actor milling around the stage, stealing apples, biscuits and water – a metaphor, perhaps, for the greedy government of before?) and instead we’re presented with a fantastic debate. The aim isn’t to ‘smash the patriarchy’ in terms of being anti-men (“There are men and women who exist on either side of the boundaries of patriarchy,” says Natasha Walter, a British feminist writer and human rights activist), but to find a way to replace established and archaic hierarchies. Humanity is forced to begin again and invited to wipe the slate clean. 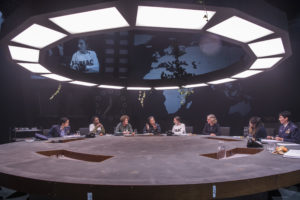 “How much power do we have?” Walter asks.

“You have the power to make all decisions,” confirms one of the actors.

The tea boy pops in every now and again, all pecs and tiny shorts, but this isn’t gratuitous. On the contrary, it’s relevant, pointing out the double standards of service and objectivity in our society. As he crosses the room, Susan George, a Franco-American scholar, writer and activist, points out that “it’s just what’s been happening to women for years”.

The next hour or so is spent deliberating over issues such as climate change, immigration, feminism, pandemics, the threat of nuclear war, violence against women, and global conflict. It’s hard-hitting stuff. Audience members ‘um’ and ‘ah’ in agreement as each panel member delivers their arguments. At times, I forget that I am watching a staged play, thinking I am watching a real-life debate. Thank goodness it isn’t, though. There’s a great big Doomsday clock ticking away in the background.

The debate is spliced with footage of disasters from recent history, both man-made and natural, and occasionally an actor will stop, a spotlight shining on them, and deliver a moving personal account of war, violence against women and suffering. It’s emotive stuff and I can see that even the panellists, who know what to expect, are visibly moved. All this added together, the tempo of the piece builds and a sense of immense urgency is created. We’re consistently made aware that time is running out.

I leave Mayfield with a mixture of emotions. Mostly concerned, slightly fearful and weirdly inspired – an odd combination to experience on the 10.04 train back to Stockport.

What if Women Ruled the World? is an incredible piece which invites us to think about who should be seated in positions of power. It’s not simply about feminism or patriarchy in its simplest terms (as the title might suggest), but invites us to think about all systems of patriarchal power, and about those who suffer as the result of decision-making – mostly vulnerable, marginalised women – and seeks to discuss innovative ways of governing.

Personally, I say get these ladies to the boardroom, quick sharpish. 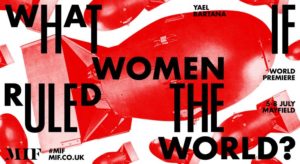 What If Women Ruled the World? is part of Manchester International Festival 2017. It runs at Mayfield until July 8, 2017. For more information, click here.