Win tickets to the launch of the UK’s first Transylvanian Festival, Manchester

Helen Nugent April 19, 2017 Competitions Comments Off on Win tickets to the launch of the UK’s first Transylvanian Festival, Manchester

Win tickets to the launch party of Góbéfest at The Dancehouse, Manchester

“There’s more to Hungarians than paprika and more to Transylvania than Dracula,” says Ottilia Ördög, organiser of the UK’s first Transylvanian Hungarian festival of arts and culture.

A Transylvanian herself, Ottilia felt it was time she shared her culture’s little known music, dance, cuisine and arts and crafts with her home for the last 26 years, Manchester – an adoptive city that, for its size, has been called the most culturally diverse in the world. 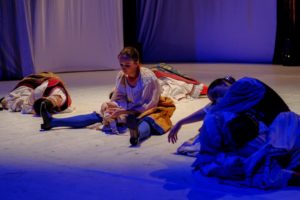 Acts from across the Hungarian diaspora will perform for free in Manchester’s central Albert Square (May 13-14, 2017), which will also play host to the city’s first Hungarian market. Delights to be sampled include Transylvanian craft beer, street food, and traditionally decorated honey bread.

Musicians travelling to Manchester from Transylvania cover many styles, from folk through to classical, jazz, rock and world music. They include Hungarian pop queen Ildikó Keresztes, now infamous as the only female judge on Hungarian X Factor, hurdy gurdy maestro and renaissance music expert Robert Mandel, Transylmania, an eight-piece folk rock band who have played together for 15 years and Folktone band, accomplished players of the ütőgardon, a folk instrument similar to a cello and almost unique to Transylvania.

The Albert Square stage will be surrounded by market stalls, selling Hungarian street food, drink, arts and crafts. Visitors can sample customary delicacies such as gulyás (goulash), lángos (fried dough served with various toppings such as grated cheese, crème frèche and garlic) and kürtőskalács (a sweet doughy treat cooked over a spit).

A range of little known drinks will be sold, including Csiki, a craft beer brewed in Transylvania since 2014 to an ancient recipe, the fruit brandy palinka and the sweet Tokaji wine, whose six grape varieties are traditionally grown 1,000 ft above sea level, near the Carpathian Mountains.

So, if this all sounds right up your street, why not enter our competition? We’ve teamed up with the organisers of Góbéfest to give away a pair of tickets, worth £50, for the festival launch event on May 12, 2017 at The Dancehouse in Manchester.

A UK premiere and exclusive, Háromszék Dance Ensemble’s The Band brings to the stage the energy, excitement and expectations of rural Hungarian wedding. After the performance, you are invited to take part in a táncház, which is akin to a ceilidh and draws on traditions from across Hungary and Transylvania.

All you’ve got to do is sign up to the Northern Soul newsletter (details of how to do this are on the right-hand side of the page) and send an email to emma@northernsoul.me.uk with the title ‘Gobefest’.

Winners will be picked at random and notified by: 29 April, 2017

The exhibition explores the memorials and rituals that surround the war and how they have influenced our perception of later conflicts.

Artist David Dunnico has created War Work, a new exhibition at @AIRArtGallery, to coincide with the 75th anniversary of the end of the Second World War. Click the link below to view the full gallery: northernsoul.me.uk/image-gall… pic.twitter.com/FVMBArHmkF

MANCscapes: urban scenes and cityscapes by artist Sue Scott @slscottartist Click the link below for the full gallery of images: northernsoul.me.uk/image-gall… pic.twitter.com/QQCMGWliqL