Beginning in the foyer and spreading towards the café at Manchester Museum is an exhibition of some significance. Organised by Virtual Migrants – who organise digital media artists and productions responding to themes of race, migration and globalisation – 90 Degree Citizen was inspired by the bi-yearly Platforma arts and refugees network conference. This will be held in Manchester from October 31 to November 1 and its organisers were keen to include an art exhibition in their line-up of activities. Initially there were difficulties finding a space – until Manchester Museum stepped in.

The linking factor here is that all works in the exhibition are by artists who have been refugees but, as Kooj Chuhan of Virtual Migrants outlines, they’re keen not to give it a simplistic label. “There are a lot of issues in terms of when we are ‘doing’ refugees in the arts, what does that mean? We’re very careful not to say ‘this is a refugee art exhibition’ because the phrase ‘refugee art’ doesn’t really make any sense but there’s a certain kind of creativity that we located amongst the experience of having been a refugee at one time or another.”

Indeed, some of the artwork in the exhibition is directly expressive of the artist’s refugee experience, but for others their output is less obviously influenced by the experience. Chuhan continues: “First and foremost I should say it is an art exhibition, it is fundamentally about a group of artists who are producing art and we’re displaying it. That’s a kind of starting point. When we dig a bit deeper into that we begin to ask, what thread is there running through this? We like to have multi-dimensional exhibitions. I often feel that the art world, especially the visual art world, is often very one dimensional in the West. [In this exhibition] there’s no prescription as to artists needing to have to reflect one issue or another.”

One of the artists most directly depicting his experience spent living in a war zone is Amang Mardokhy. He paints bold, powerful depictions of the horrific sights he saw in his native Kurdistan in Northern Iraq, they are eyewitness accounts of the persecution his people were subjected to under Saddam Hussain’s regime.

“My memory was full of sad stories and full of psychological damage, culture was destroyed, everything in front of me. I didn’t see the hope inside it. After I come to the UK, I see what I come through. My art work reflects what I have seen, trying to express the feeling of the people. The situation is still same, after is Iraq war, Afghanistan, Sept 11th, Syria, Libya – war is moving around us, you are never going to stop this situation, I don’t agree with any war, 13 year of my life in this process. I’m not a person to be all dark side, sad story whatever, but that is the reality.” 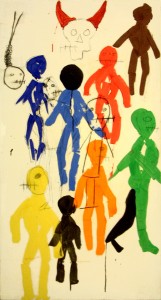 Originally from Zimbabwe, Tracey Zengeni’s work focuses primarily on impermanence: “Anything that we do, you walk out of your house, that could be pretty much the end of you. You always walk with death on our side. A flower growing, within a day could be dead.”

But rather than a depressing notion, it instead forces focus onto the present and Zengeni produces artworks bursting with colour and life. “Not that I’m morbid I just like the idea of knowing that whatever it is that I create can possibly not be there tomorrow. Whatever is in my mind cannot be the same, I can never be the same painting twice.”

“Abstract forms are my dearest friends in my poems, photography or phrases. Talking about bad [things], makes bad stronger I believe. If we try to show the good side of everything I think it’s the only weapon people like me and you have got. What I try to show in my pictures, for example, is using darkness to show the light. If we try to do this every day in our life we can say that we’ve been fighting with peace [to combat] what we call darkness, what we call war.”

Meanwhile, there are detailed monochromatic paper-cuts by Iranian Flora Alexander and Iseult Timmermans who work with the Glasgow-based International Women’s Group and record their response to issues of violence against women.

It’s also significant that the artists are exhibiting in a museum stuffed full of artefacts that were taken, at one time or another, from other countries and cultures. The presentation of these objects is something that Stephen Welsh, the director of Living Cultures at the museum, is looking to change.

“What we need to do is look for new ways of working and challenges on our preconceived curatorial orthodoxies used in museums, particularly when it comes to migration. Museums haven’t been particularly good at representing diaspora or migration. Museums have been concerned with categorising people, defining them as belonging to a certain place at a certain time. But the reality of the situation is that many people have migrated over thousands of years for very many different reasons and we need to find ways to illustrate that in the collection at the museum that we have.”

Mazaher sees the poetry in himself, as a refugee, exhibiting alongside these objects. “What is interesting for me in this exhibition, my artwork is in a place that I can call ‘a refugee place’. The objects presented here are from different areas around the world and one of these artworks, one of these objects, is my artwork. So I see it as a really close connection between these art works as ‘refugee’ objects and my artwork as someone who is a refugee.”

More info: 90 Degree Citizen exhibition continues until November 17, 2013. Platforma is at Manchester University from October 31 to November 1, 2013 and an additional pop up exhibition Committed to Represent organised by Greater Manchester Immigration Aid Unit takes over a temporary space in the Museum from October 30 to November 1, preluded by a discussion and performance event on the opening night 6pm-9pm.