A design for life: the building of a northern architectural success story

Bernard Ginns November 9, 2017 Enterprise Comments Off on A design for life: the building of a northern architectural success story

It is said that some of the best success stories begin in failure. This narrative rings true for Amir Hussain, chief executive of YEME Architects, an award-winning Bradford architectural practice.

In 2008, Hussain was running a small property development firm which was heavily invested in an apartment block in central Bradford. As the financial crisis began to bite, the money markets dried up and investment ground to a halt. Northern Rock, which was financing Hussain’s development, was in trouble.

Sitting in YEME’s stylish offices in the former Diplomat hotel in central Bradford nine years later, Hussain shudders at the memory of struggling to keep up with repayments as Northern Rock teetered towards its eventual collapse.

“I went through an excruciating process, but managed to avoid bankruptcy,” he says. “Whilst it seems a waste of time, it was instrumental in our future success. I managed to get the building refinanced and it was sorted, but I never wanted to get involved in another commercial relationship with a bank.”

Hussain bided his time before setting up YEME, originally a home extensions business, in 2011. The early days were tough: “It was a really bad time – the architecture sector was decimated. When you start an architectural practice from scratch, you don’t any buildings to show. We were keen to get our credibility across from the drawings, so the standard had to be incredibly high. It went well, but it was hard work.”

Breakthrough came in 2014 when Hussain was asked to renovate a listed former swimming baths in Manningham into a gymnasium. This was not without controversy – the local community wanted to protect the building and sympathetic restoration was needed. In consultation with the community and council, the project moved forward and was a huge success. Hussain learned a lot: “Good architecture has the capacity to develop a building in a way that makes its past relevant to people who perhaps had no association with it, and allows people who had an association to still feel that it has been respected.”

Today YEME employs 15 people providing commercial and residential architecture and design services to the public and private sectors. From Sheffield to Stratford, and Leeds to Liverpool, YEME travels widely.

Successful architects combine artistic sensibility with the hard-headed practicalities of engineering, and the best have a clear philosophy underpinning their work. Hussain’s enthusiasm is clear as discusses architecture as a medium for communication. “As a form of communication, architecture is more compelling than any other,” he says. “When someone sees a space or a building, it positions where they are as an organisation – what their aspirations are, what their ethos is, and how confident they are.”

YEME specialises in improving other practice’s architectural plans. He says: “We refer to ourselves as second architects on a lot of projects. It still shocks me the number of clients who are commissioning buildings that have got an ill thought-out, ill-resolved layout. We look at the plans…and have actually reduced the build costs, increased the capacity and end value, and created something that looks far more distinctive.”

YEME recently started working with Leeds’s Parklane Properties after Hussain was invited to redesign rooms in a flagship development that the company was unsure about. Parklane liked Hussain’s ideas and a fruitful relationship was borne. “They are entrepreneurial, incredibly high quality and have a very strong emphasis on design,” he says.

YEME’s success in Manningham was the springboard to specialise in another area: sympathetically restoring Bradford’s wealth of underused historic buildings. The Diplomat Hotel is a case in point, and Hussain is visibly proud of the transformation of this building.

He is passionate talking about Bradford’s diversity, energy, enterprising spirit and potential. After graduating from Leeds University, he chose his home city over Leeds or London to set up his first company. Hussain says the city was buzzing: “Investment appetite in Bradford was very strong. I found doing business in Bradford very encouraging as pivotal people and organisations were very accessible.” 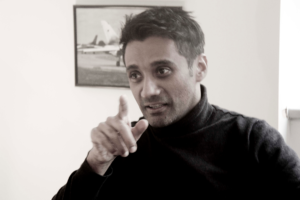 But he also believes that opportunities have been missed to back areas of excellence, such as textiles and food, and promote them nationally and internationally. Better integration between communities is needed too and more should be done to encourage entrepreneurs to collaborate. “Regeneration has to come out of the people who are doing things – the entrepreneurs. The problem is that there’s not enough engagement with them. There’s not enough collective massing of that talent.”

Hussain admits that he spends most of his time at work. He wants YEME to be a top 100 agency and plans to increase staff and revenues four-fold. YEME is on the verge of a ‘big increase’ in business and major contracts, including a £38 million project in Milton Keynes. A London office will open this year or early next.