You dream of this kind of night at the theatre, the kind of night where the magical formula of script, staging and performance puts you through the emotional mangle before imprinting itself forever upon your memory. If you let it, HOME’s must-see performance of Uncle Vanya will give you just such a night.

Andrew Upton’s version of Chekhov’s 1899 comic drama, staged as part of HOME’s season marking the 100th anniversary of the Russian Revolution, tells the story of the inhabitants of a country estate in rural Russia; although inmates might be a more apt description for they are all trapped there by a myriad of reasons, the origins of which are explored in the play.

Vanya (Nick Holder), a reasonably articulate man, has settled into an existence of bitter disappointment at the realisation that he’s sacrificed and wasted his life managing the estate of his former brother-in-law and absentee landlord Professor Serebryakov (David Fleeshman). It is Vanya’s tragedy that he now realises the Professor, whom he once venerated, is nothing more than a pedantic second-rate academic.

Sonya (Katie West), the Professors’ daughter and Vanya’s assistant, silently endures her unrequited love for the local doctor (Jason Merrells), a passionate but frustrated man whose embrace of nihilism and vodka grows with every passing day.

The inhabitants of this metaphor for a declining Tsarist Russia might simply have edged their collective way to oblivion without incidence had it not been for the fact that the Professor has decided to leave Moscow and set up camp at his country pile with Yelena (Hara Yannas), his young, sultry second wife. And cue the madness as both the doctor and Vanya fall in love with her.

Chekhov together with Ibsen and Strindberg is widely regarded as one of the founding fathers of modern theatre. His laconic lyricism endures not least because his mastery of simple yet subtle and insightful story telling lends itself to each successive generation. In Uncle Vanya, the characters are listless, unsatisfied and exhausted by their own impotence to change either themselves or their surroundings. The estate is Russia herself, shabby and in decline, kept going only by the sheer inertia of 300 years of Romanov tradition. 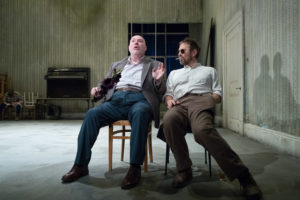 But already the storm clouds are gathering and everyone knows it. Chekhov brilliantly depicts the fears, neuroses and obsessions of his compatriots, who in a few short years will become Former People.

The play is staged and directed with great subtlety and, although it’s geographical and social setting is clear, the addition of the odd piece of technology sets it free from the constraints of a period piece. Its soul however remains Russian to the core and the ghosts of Tolstoy and Gogol haunt the proceedings.

In the ensemble scenes we learn at least as much from the reactions of those who are silent; their inadvertent glances, secret smiles and sudden flinching; and always the silent, watchful peasant (Joseph Hardy) slowly sharpening his blade in the corner of the room, disregarded to the point of invisibility by the main protagonists.

First-rate performances were the standard on the night. The growing, mutual fascination between Hara Yannas and Jason Merrells was completely compelling and the sparks from their crackling on-stage sexual chemistry threatened to burn down the whole estate. Nick Holder’s performance as Vanya displayed masterful comic timing while at the same time fully conveying the true tragedy of a wasted life.

But it was Katie West’s stunning performance as Sonya that left me breathless with admiration. The play as a study of a society in decline is fascinating, but as a study of human frailty and endurance it is simply superb, and ultimately it is Sonya’s story that lies heart of this. West plays Sonya with a heart-breaking brittleness and innocence. The purity of her unrequited love increasingly threatens to morph into madness, and her soliloquy, one of a series in the play, was one of the most moving and thoroughly disturbing things I’ve ever seen on stage. As to the question of possible redemption, well, you must discover that for yourself. 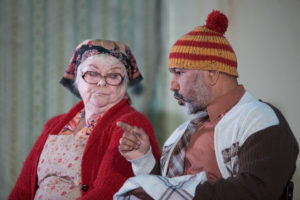 Uncle Vanya is at HOME in Manchester until November 25, 2017. For tickets, click here.