Art Review: How to break the humdrum – Obstructions at Castlefield Gallery, Manchester

Nancy Collantine March 12, 2021 Art, Arts Comments Off on Art Review: How to break the humdrum – Obstructions at Castlefield Gallery, Manchester 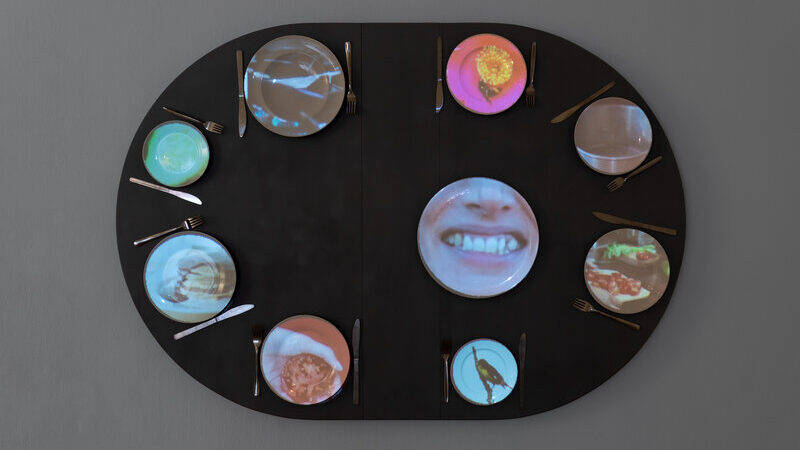 It’s hardly welcoming. A snide, on-screen solicitor is the only semblance of human contact we encounter during Obstructions, the latest virtual exhibition at Manchester’s Castlefield Gallery.

His telling tale about a run-in with an old school friend is an awkward yet strangely satisfying surreal film by Paddy O’Donnell. Playing to the gallery is a bewildering tale, following an imaginary artist called Bramble Richard. During the film, O’Donnell questions his own reality and that of his obstruction, which was to “incorporate ideas in the work that his imaginary childhood friend, Bramble Richard, would approve of”. The joke being that he’s smuggling his old-fashioned modernist sculpture into a contemporary gallery in plain sight. It’s a tale with a twist where O’Donnell plays all of his characters, including the solicitor.

So, what is Obstructions? In a nutshell, it’s a project where 15 artists have each been dealt an instruction to revisit and re-make an old piece of work in a different way. The premise? To use a new set of limitations or an intention set by one of the other artists.

Painter Katy Tomlison’s obstruction was to re-imagine her painting by depicting young dancer, Kathleen the Queen, in 3D and monochrome. Tomlinson builds a monument, Kathleen the second (which we also learn nearly broke her maker), and the struggle is commemorated in her statuesque figure, resplendent in bird shit and accompanied by some pleased pigeons. 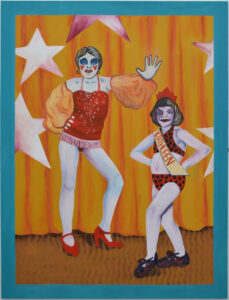 The idea came from the 2003 film, The Five Obstructions by Lars Von Trier and Jorgen Leth where the latter is tasked to remake his 1967 short film, The Perfect Human, five times, each time with a different instruction from Von Trier. These included the instruction that no single edit may be longer than 12 frames. There is also a whiff of Brian Eno’s Oblique Strategies, a stack of cards offering creative counteraction to usual modes of thinking and doing.

In Global seam of plastic, Jane Fairhurst is an archaeologist of the future, arranging discarded toys and unidentified plastic components like artefacts in archive boxes. Little watercolour drawings of each object protrude from brightly coloured lumps of clay. By seizing on her obstruction to use only found objects, Fairhurst draws upon her past Egyptology research to create a collection of bright and bothersome bits from a not-so-deep dig.

In following her obstruction to “return to the point of origin”, Claire Hignett retraces her steps back to the beginning of her practice to produce a more powerful piece. Do be careful offers us flattened, serious-faced rag doll encased in plastic and framed in a stitched blanket. A vision of a cushioned yet suffocating childhood.

Squeezing a big project into less time was the obstruction given to Maya Chowdhry, which demanded that her projection mapping film about food consumption be made into a short sequence. As a result, Chowdhry serves up a ready meal. What’s eating paradox is a table set with knives, forks and plates of talking heads, and a discussion about the pleasure and pain of food, including knowledge of food production being an unpalatable truth.

Sheela is a woven wall sculpture, which features woollen tentacles entwined with lime, jade, turquoise and purple as well as large bright red tufts and flashes of cadmium yellow. This is Alena Ruth Donely’s offering to the artist who obstructed her with the instruction to “tell a story of a goddess…with uninhibited anger”. Donely has turned her rug artistry into the flood-avenging goddess Sheela na Gig, protector of sinful women who are banished to the sea. 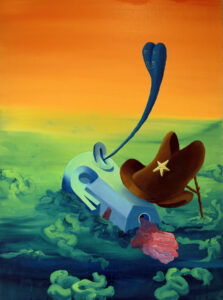 The heightened colour palette of Parham Ghalamdar’s pre-obstruction painting, Spectre, reads like a strange desert into which a crash-landed craft is ejecting the contents of its intestines, and a comic book cowboy hat is perched atop a stick. You have to wonder what was the obstruction that would give way to a rubbly pile of dried-up bits of clay and indeterminate objects. And the cowboy hat. It feels like a makeover gone west and the in-between has become the drama.

Luckily, Ghalamdar’s original painting and his creative process are included in the exhibition for us to digest, alongside the work of all 15 artists to varying degrees. The obstructions work best when they reveal the undoing of each of the artist’s practices. But this is not always obvious. Maybe this is where we’re encouraged to fill in the gaps?

The resulting exhibition at Castlefield Gallery is strong and accessible. It also includes honest and creative responses from the artists. As a viewer, we take a closer look at each work of art, its obstruction and the artistic response via a virtual gallery setting which, in a way, is our own obstruction. But it also affords us the chance to delve a little deeper and take time over the process.

All photographs courtesy of Jules Lister. 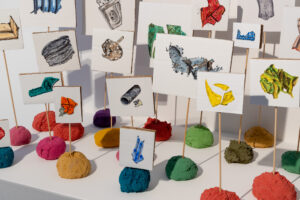 Due to COVID-19 restrictions, Castlefield Gallery is currently closed. Obstructions is accessible until April 18, 2021 –  the virtual gallery can be viewed online here.