Growing up North: Prepping and pruning the winter garden 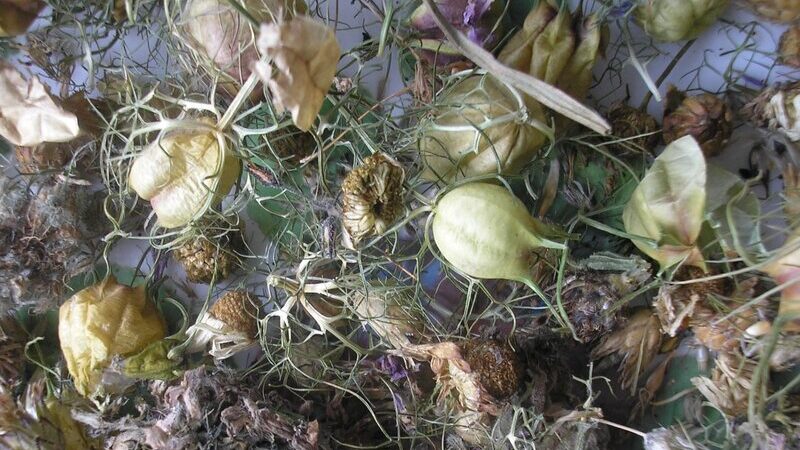 Looking out at the garden at this time of year is hardly an inspiring sight. But under the frost and brown dead stems are green shoots and a glimmer of hope for warmer days. January was an ice-cold month so I stayed cosy indoors. As February and March progress, though, there’s been a brief respite from the freezing temperatures and, as ever, I’m back in my wellies and out like a shot.

You’d be forgiven for thinking that there aren’t many gardening jobs to do at this time of year. Not so – there is plenty to keep you busy. First on the to-do list (I’ve been itching to carry out this task) is removing old stems and seed heads left over from winter. I allowed mine to linger this year in an attempt to support any wildlife needing a home during the colder months and, while I wholeheartedly agree with the principle, I can’t help but find it all rather dreary and untidy. With the possibility of insect activity, I leave the dead foliage next to the compost bin so that any living thing has the chance to finish its life cycle in the spring.

Usually, my next job is clearing out my cold frames, removing anything that didn’t make it and potting any late-summer cuttings that have survived. Last year, I had a huge problem with beautiful but destructive Rosemary beetles. Worried they might decimate my lavender and rosemary bushes, I took several cuttings in September hoping to create replacement plants should the worst happen. I’ve been lucky with cuttings in the past, but I certainly surpassed my expectations this year. I have about 14 new plants, all of which need to be carefully re-potted and popped back in the cold frames for balmier days. 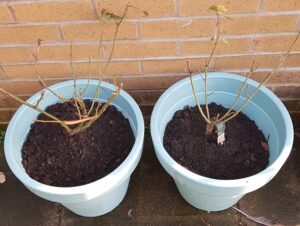 Every February I kid myself that there’s not much to do. But as soon as I’m outside poking around, I see a million things that need to be done immediately and I suddenly remember that my dormant rose bushes and apple tree need a trim. Pruning in the late-winter months always feels like an incredibly brutal act, but the plants are asleep and there’s no better time to do it.

Apple and pear trees which have been trained into a cordon, fan or espalier formation should only be pruned in the summer months, but a standard dwarf, like my Emneth Early, should be cut back in the winter if it needs it. I’ve been a bit remiss with my apple tree; it should have been pruned hard last year but, somehow, I never got round to it. Consequently, it had about 12 shoots growing from near the base and its crown lacked shape.

Pruning: everything you need to know 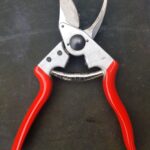 Before I begin the pruning lowdown, it’s important to say that you’ll need a pair of good, sharp secateurs for pruning a fruit tree or roses. I wasted so much money on cheaper pairs that I could probably have bought three decent sets with my false economy. There are several good brands out there but, like St. Monty of The Don, I do love Felco secateurs. They are strong, easy to sharpen, and the company sells replacement parts so you can fix them when they wear out. They also come in a range of sizes, which means I don’t have to wrestle with unwieldy shears that are too wide for my grip. I am the undisputed queen of garden thrift but, sometimes, you just have to spend money on good quality tools. Think of it as an investment.

So, back to my little apple tree. I removed all the base branches as close to the trunk as possible. My crown needed a little shaping, so I trimmed each branch by a third making sure to cut about two centimetres above a budding leaf. Although I might have ruined my chances of any fruit this year, I’m hoping that the tree will now have more energy to become vigorous and strong. I pruned back some nearby elder trees too, but, in my haste, I ended up lopping off half a Virginia creeper I had cultivated for about three years. So, don’t get carried away with tree-pruning. 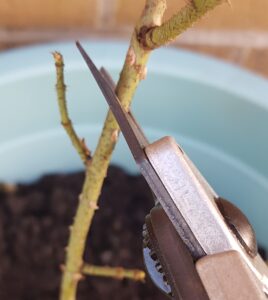 Roses and apples are from the same family so they require pruning in a similar way. This is the perfect time of year to move existing roses and perhaps plant new ones. I always prune mine by about a third, which seems to give me the most flowers and the best shape. Now, some gardening experts might stipulate the exact angle to cut stems, but I honestly don’t think it matters as long as it’s made in the correct place. Ideally, this is about two centimetres above a leaf node and the cut should be clean with no jagged edges. It’s also a good idea to sanitise your secateurs between each plant so as not to spread any diseases that may be lurking.

Having pruned everything to within an inch of its life, I give my trees and roses a mulch and a good feed, usually with my homemade comfrey liquid fertiliser. Initially, I began weeding at this time of year thinking I was giving the garden a good tidy for the spring. But I regularly forgot what I have planted where and ended up removing perfectly good sleeping flowers because they looked like an old bit of root or weed. Having lost a lot of plants this way over the years, I am going to hold off weeding until I can see exactly what is growing.

A brew, a biscuit and a browse 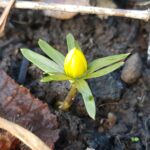 After completing as much of the work as I can before spring arrives, I come indoors for a brew, a biscuit and a browse through my seed book of dreams. Or to be more precise, drool over the seed catalogues posted to me by various companies I’ve used over the years. If you haven’t already, now is the time to plan what you will grow from seed and to plot where you will find space for it. Some people actually draw out a landscape-style map of their 2021 garden, but I keep mine in my head as I generally change it about 15 times before making the final decision. During the first few years gardening here, I often changed where plants would go because I hadn’t considered the amount of sunlight or soil each needed, so that should always factor into your plans. 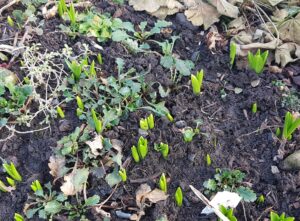 Once you’ve decided what you’d like to achieve, it’s time to source plants and seeds and, if you’ve been thrifty, to sort through the seeds you have saved and dried. Usually, I have a pile of flower seeds which I dry on a tray or large plate in the kitchen at the end of the summer. I then stuff the whole lot into one large brown envelope. This is when I pay the price for my laziness and end up spending hours separating the seeds into type. I derive a masochistic pleasure from this painstaking endeavour, delicately removing the seeds from their husks. It’s a good idea to look through your seeds, even if they are separately packed and orderly, as it helps recall what thrived and what failed. Again, these should all be factors in your plan.

Are you jammy enough to have a nice warm greenhouse? Then it’s time to start growing lobelias, chrysanthemums and sweet peas from seed. Begonia and dahlia tubers can be popped into a bit of moist compost to wake them up. You can get ahead of the game with veg by planting tomato, pea cucumber, sweet peppers, basil and even aubergine seeds. If like me, you have only a sunny windowsill and a cold frame, it’s best waiting for spring before trying to grow more. Our northern climate means that the information on southern seed packets can be misleading. Lower temperatures and a risk of late frost mean that ‘March sowing’ is more likely to be late April for us up north. 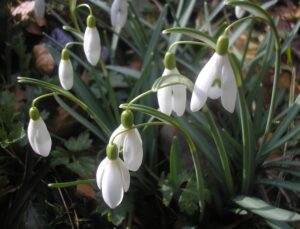 In the meantime, there’s still loads to do outside, including moving or splitting old tuberous plants to create more, as well as planting winter flowering shrubs like witch hazel. There is a small window of opportunity to plant alliums and lilies. If you are growing veg, you can begin chitting your potatoes for the early crop and perhaps start brassicas undercover. Anything else will have to wait. But as I potter around with a multitude of growing ideas whizzing through my head, the thing that brings me the most joy is the green shoots poking through the soil, heralding that spring is just around the corner and a new growing year, full of possibilities, is about to begin.