Originally produced as an afternoon play for Radio 4, Black Roses: The Killing of Sophie Lancaster intersperses Sylvia Lancaster’s verbatim recollections of her murdered daughter Sophie with the spellbinding poems of Simon Armitage – written in the first person, as if Sophie was speaking.

It was first performed as a stage play in 2012 at Manchester’s Royal Exchange Theatre and returned there earlier this year before embarking on a tour of community venues in the North West – of which Burnley Youth Theatre was one.

Sarah Frankcom and Susan Robert’s simple yet powerful production plays out on a suitably understated set. Julie Hesmondhalgh (best known for her role as Hayley Cropper in Coronation Street) is superb as Sylvia, the mother devastated by her daughter’s death, who somehow manages to retain a sense of defiant dignity. She sits on an armchair, clutching a lighter and packet of cigarettes while Sophie – played with impish charm by Rachel Austin – perches on a park bench before skipping and strutting on the grass that surrounds her mother. But the set is of little consequence.

This play is all about the words. 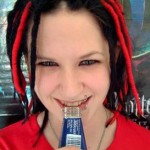 Her mum remembers her from the beginning: a good baby, an introverted child, but one who always knew her own mind (she became a vegetarian aged 6 and wore her first item of ‘goth’ clothing at 11). Sophie introduces herself too, and a picture soon emerges of a sensitive, compassionate and complex young woman. This makes the second part of the play that much harder to bear.

On August 11, 2007, Sophie and her boyfriend Robert Maltby were talking to five teenage boys in Stubbylee Park in Bacup, Lancashire. At first the boys seemed curious about the pair’s appearance – Sophie and Rob dressed as goths or ‘moshers’ – but the atmosphere soured and the gang began a vicious, unprovoked attack. As Sophie tried to protect Rob, they turned on her, kicking her unconscious. She died from her injuries 13 days after the assault. She was 20 years old.

When the play focuses on the aftermath of the attack, Sophie still speaks to us, caught between the living and the dead. Or, as Armitage so eloquently puts it: “Hardly a pulse. Barely a breath. A thread, a trace, a past, a waste.”

But it is Sylvia’s stark, heart-rending comments that stay with you.

How her “gentle, kind girl…with the heart-shaped face and swan-like neck” was left so bruised and swollen that paramedics on the scene couldn’t tell if she was male or female.

How, when doctors first tried to take Sophie of the life support machine, her back arched as her muscles spasmed and she made a loud, groaning noise like a cow lowing.

And how, when a brain scan revealed that Sophie would not recover, the nurses cleared the tubes and monitors away so that Sylvia could bathe her daughter and climb into bed with her for one last cuddle as she began to die. 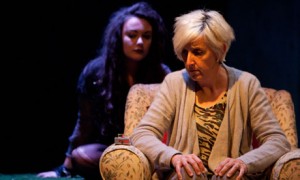 Brutal and beautiful, visceral and magical, soul-destroying and yet life-affirming, Black Roses is hard for anyone with a shred of human decency to watch. For parents it’s especially difficult. And for mothers of girls it’s nigh on impossible. But then you remind yourself that you are merely sitting in a theatre, listening, whereas Sylvia Lancaster lived it.

As the performance at Burnley Youth Theatre ended it was met, not by spontaneous applause, but with sniffing, shifting and coughing. Julie Hesmondhalgh and Rachel Austin were then joined on stage by Sylvia Lancaster herself.

Sylvia has never seen the play or heard the original radio version and so didn’t comment on the performance itself. Instead, she talked about the work of The Sophie Lancaster Foundation, a charity she set up in Sophie’s name to ‘Stamp Out Prejudice and Hatred Everywhere’ by creating respect and understanding for subcultures within our communities.

Black Roses is just one of the ways in which Sylvia raises awareness and promotes tolerance (the original radio version is due to be played in the House of Commons on March 26 and will be followed by a discussion on hate crime).

That this play has been performed is some achievement; the fact that it had to be written at all is a tragedy.

What: Black Roses: The Killing of Sophie Lancaster

For more information on The Sophie Lancaster Foundation go to www.sophielancasterfoundation.com