Exhibition Review: Prints of Darkness – Goya and Hogarth in a Time of European Turmoil, The Whitworth, Manchester

Paul Davies September 4, 2018 Art, Arts Comments Off on Exhibition Review: Prints of Darkness – Goya and Hogarth in a Time of European Turmoil, The Whitworth, Manchester

Poverty, homelessness, alcoholism and inequality are all things you might expect to encounter on a short walk around a city centre. So why go to the trouble of visiting a gallery to see them on display?

Despite being more than 200 years old, the prints of Francisco José de Goya Lucientes and William Hogarth, brought together in a thought provoking exhibition at The Whitworth in Manchester, provide a timely opportunity to compare and acknowledge the familiar dysfunctional traits of society.

Hogarth’s work may be more recognisable and rich in detail; sequences such as Times of the Day and Marriage à-la-mode act as a graphic novel with a verse at the foot of each print. These satirical fables mapped the social, material and spiritual decline of individuals corrupted by the excesses of London, and it doesn’t take much imagination to see the parallels today. 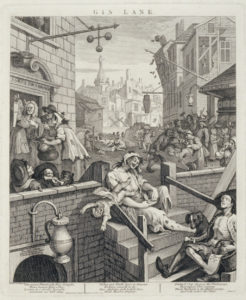 Visitors can also appreciate the progression in print techniques in a short space of time. Hogarth used the more laborious line engraving method while Goya used aquatint to create a tone, almost as a sepia upgrade to Hogarth’s black and white.

As a result, Goya’s print series is more visually bold, full of contrast and impact, and the lack of an accompanying text means that there’s more scope for interpretation. Goya’s work is equally striking due to the violence contained within. As someone who witnessed Napoleon Bonaparte’s invasion of Spain first-hand, he used print to depict the resulting brutality and suffering (The Disasters of War). Meanwhile, The Art of Bullfighting is another series on display which evokes similar emotions.

Stepping back into the modern day, it’s possible to see how both of their styles have influenced satirical and political prints over the past 50 years, from artists as diverse as Gee Vaucher (and her notable collages with anarcho-punk band Crass), Banksy, and even cult Twitter artist @Coldwar_Steve. 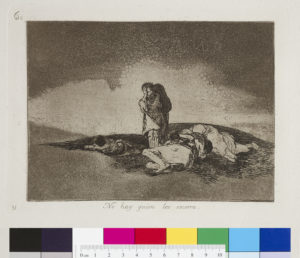 As well as their observations of society in general, both artists were influenced by an ever changing European backdrop and a mutual dislike of France. Goya fought for liberal reforms, while in 1748 Hogarth was arrested in Calais on suspicion of being a spy. Hogarth’s O the Roast Beef of Old England was inspired by this event and his Enraged Musician print shows a mistrust of different cultures, the enraged musician here being ‘pretentious’ Europe.

This patriotism and emphasis on national identity also resonates today in the build up to Brexit. Despite mocking the obsession over French fashion, Hogarth still used Parisian engravers to provide the elaborate details on some prints. Such an act brings to mind the so-called outrage over a French company producing our post-EU passports.

The exhibition runs until August 2019 by which time the European picture will have changed again. Either way, Prints of Darkness will still have a poignant relevance, a mirror that beguiles as well as horrifies. It remains to be seen how distorted and grotesque the reality will be.

(Main image: William Hogarth, The Gate of Calais, 1748. The Whitworth, The University of Manchester)

Prints of Darkness: Goya and Hogarth in a Time of European Turmoil is at The Whitworth until August 2019. For more information, click here.

Note: Currently (and curiously) Hogarth’s ‘A Harlot’s Progress’ is displayed separately in the Exchanges exhibition area so make sure you don’t miss it.