Andy Murray September 10, 2013 Bands & Gigs Comments Off on Chasing Owls – best name for a band ever? 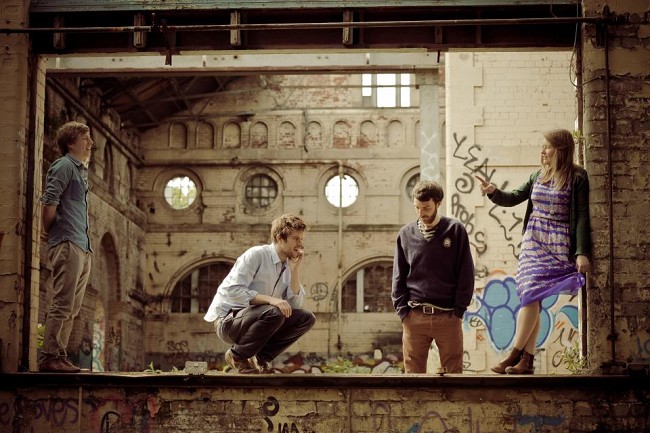 Among the many manifold delights on offer at this weekend’s Ramsbottom Festival is an appearance by Edinburgh band Chasing Owls. Since forming in 2010, they’ve built a strong following as a live act on home territory and around the festival circuit.

Lead by singer and guitarist Ben Sunderland, most often their sound is described as ‘indie-folk’. Sunderland himself is pragmatic about that genre tag. “Well, I suppose you’ve got have a wee kind of buzz phrase of some sort, “ he acknowledges. “I mean, that’s the natural question when you tell someone you’re in a band. First of all they ask you what the band’s called, then they ask you what the band’s like. We’re quite happy to have a label of some sort, but really we’d far rather say, ‘Do you know what? Come along to a gig or have a CD and make your own mind up’.”

Chasing Owls’ music puts an emphasis on classic song-craft, heavy on the chiming guitars and harmonies. ‘Indie-folk’ isn’t just a throwaway tag, though. They do genuinely have a grounding in the traditions of folk music.

“That was totally my introduction to playing, growing up with the music of my local area on the west coast of Scotland,” says Sunderland. “So yeah, that’s the heritage. But I think we also fit into this kind of ‘new folk’ world.” They don’t go in for a purist approach, though. “Some people get upset that ‘folk’ is becoming an almost mainstream sort of thing that’s not actually ‘folk’ any more. Well, maybe the mainstream folk isn’t ‘folk’ as you know it, but then again it does provide access to this amazing heritage of British music that people might never have heard before. They might start off listening to a band like – well, Mumford and Sons is the big example of that. Then suddenly they’re off listening to Dylan or John Martyn or Rory Gallagher. We’re more than happy to be associated with stuff like that.”

The band have self-released a pair of EPs to great approval, but not a full album as yet. That may well change imminently, though. “I maybe shouldn’t say it because then it means we might have to go ahead and do it – but we are planning to start recording an album in the Autumn and hopefully release something next year. Your first album is something that you want to get right.” 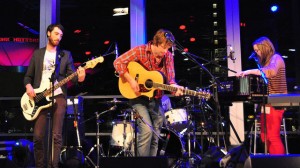 Up until now, the band have been focussed on playing live, mostly around their home circuit. Sunderland explains: “Well, Scottish crowds are nuts anyway. The fans there, they really get into music – into any band, actually. But they look after their own as well. A home gig always feel like the biggest gig you’ve ever played.”

Back in June, the band played at Glastonbury in the Avalon Cafe – not the Pyramid Stage just yet, perhaps, but nevertheless a mighty achievement for a young band. “We just love festivals. I guess they suit us quite well. But as a total independent band, we didn’t have our sights on Glastonbury at all. I mean, it was certainly an ambition, but we’d kind of put it on the back burner for ten years or whatever. So to get that completely out of the blue, and totally by invite, was great.” The experience certainly left its mark. “I was just really impressed with the vision of the whole site. It’s fifteen, twenty festivals in one basically, with all the different areas, but there’s a real cohesion about it. As a band, that’s dead easy to tap into. You feel as though you’re at a kind of family get-together – admittedly the biggest extended family ever.”

Looking ahead, Sunderland’s fired up about their forthcoming debut at the Ramsbottom Festival.

“We’ve been aware of it by name for a while now. We have a few friends from up here that have played it before. The Admiral Fallow guys from Glasgow were down last year. To be honest, there’s a lot of festivals in the UK full stop and, with so many of them, the conversations always go, ‘Oh, another rubbish festival’. So I think it can be hard for a new festival to establish itself. But if you put on a really great, well-executed festival, it’s quite easy to make a name for yourself through all the dross, and we know all about Ramsbottom by reputation.”

Where: Ramsbottom Cricket Ground, near Bury