You wait ages for a play set in a chip shop and then two come along at once.

In May, Bradford-based Freedom Studios in association with Bolton Octagon are staging #ChipShoptheMusical in a North West chippy. Before that, Manchester theatre company Box of Tricks presents Chip Shop Chips which will, we are promised, include some Northern soul.

Shows set in chip shops? Brilliant! And that’s not even the best bit. Both productions include fish suppers in the price of admission. I don’t know about you, but they had me at chippy tea…

Chip Shop Chips kicks off on February 17 at The Hub in Salford before going on the road to unusual venues across the North of England. I caught up with playwright Becky Prestwich to find out more.

Northern Soul’s Helen Nugent: Where did the idea come from for Chip Shop Chips?
Becky Prestwich: When I was pregnant with my son, I had quite extreme chip cravings. For the first few months of the pregnancy, I could pretty much only stomach chips and the occasional cheese sandwich. So, I was spending a lot of time in chip shops. And one night – before a Box of Tricks production actually – my husband and I ate at the Olympus Fish and Chip Shop opposite Bolton Octagon. It was a brilliant place for people watching and it struck me that it could be evocative to tell a story in a room that smelt of chip fat and vinegar, using all the memories those smells conjure. And straight away, I knew it would be a story about family and falling in love.

NS: What is the play about?
BP: It’s a love story, or two love stories actually. After his father’s death, Eric, a 60-something drifter, has come home. He’s always been a bit of a black sheep and he wants to prove himself by transforming the family chippy into the kind of trendy fish and chip restaurant that serves Halloumi as the veggie option. He has this big opening night planned but he’s completely thrown by his childhood sweetheart, Christine, arriving. They haven’t seen each other in over 40 years. Christine’s a Grandma – and a widow now. Neither she nor Eric has lived the life they imagined they would, and she’s wondering if there’s still time for one last big romance. Alongside Christine and Eric, we see Lee and Jasmine – two 18-year-olds who may or may not be about to kiss for the first time. So, really it’s a play about memory and possibility and first love and nostalgia. 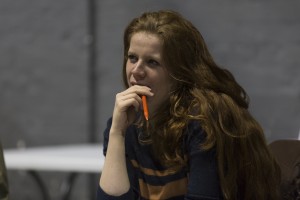 NS: How do you hope performing in unusual places will enhance the play?
BP: From the outset, the sense of the audience people watching felt really important to this story. With Lee and Jasmine’s story in particular, I wanted it to feel like the audience have just stumbled across this lovely little love story and that we’re witnessing something really intimate and private. I think that can be hard to recreate in a theatre building, where there are really defined boundaries between the audience and the actors. I also think there’s something incredibly exciting about the way that every night will be very different as the actors adapt to a new setting and a new relationship with the audience.

NS: Do you think offering the audience a chip supper will boost sales?
BP: I hope so! But more than that, I hope it will also help to attract a broader audience. I used to work in the participation team of a theatre and with this play, I wanted to tell a story that anyone could come and see and enjoy, including people who might never normally dream of stepping inside a theatre. Making the show a complete night out was a part of that – I hope the audience will feel that they are part of a whole experience, not just passively watching a story unfold.

NS: There are a couple new plays happening across the North this year set in chip shops. Why do you think that is?
BP: It’s interesting. The plays are all very different but I think they are all in some way exploring what the British passion for fish and chips is all about. I find it amazing that for every one branch of McDonalds there are still eight chippies. Fish and chips are strangely wholesome – I feel much less guilty feeding my kids fish and chips than I would giving them a McDonalds. Fish and chips conjure a kind of instant nostalgia – they’re about comfort and family – and that kind of nostalgia seems to be everywhere at the moment from retro beards to The Great British Bake Off and vintage everything. I think this spate of Northern chip shop plays might be connected to that, using fish and chips as a vehicle to explore tradition and society and what remains constant in a changing world.

NS: Is the chippy a particular part of Northern culture and heritage?
BP: When we were developing Chip Shop Chips we ran a lot of workshops to gather people’s fish and chips memories and one of the hottest debates was about where in the country fish and chips actually came from. There was a woman from the East End of London who had moved to Lancashire and was outraged by the quality of chippies and adamant they were an East End invention. I did some research and historically there were fish and chips in both Lancashire and London from around the 1860s, although I think in London they were more about the fried fish and here we were all about the chips. For me, fish and chips feel properly Northern – they’re about windy seafronts and rushing home in the rain before your chips get cold. But then, I guess that is the joy of fish and chips, most British people have their own memories and associations of them, and for most people we spoke to they were in some way about home.

NS: Tell me about yourself and your career.
BP: I’ve been writing on and off for almost ten years – in fact Box of Tricks produced my first full length play at the White Bear in 2007. But for a long time writing wasn’t my ‘real’ career. I also used to work as drama practitioner delivering theatre projects to children and young people including as the young people’s programme leader at the Royal Exchange Theatre in Manchester. 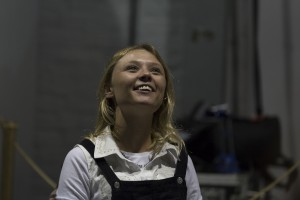 After I had my second child, it became increasingly difficult to juggle looking after two little people with both working and writing and so I took the plunge into writing full-time. Now, I’m writing regularly for Doctors. I’ve also had a couple of afternoon dramas on BBC Radio 4 – Chopping Onions, which was a mother/daughter story about three generations of Jewish women cooking chicken soup together, and Aliyah which was about a mother searching for her son in Jerusalem.

I recently took part in Uprising, an attachment scheme with the brilliant Monkeywood Theatre Company and I was one of the writers on Sanctuary From The Trenches, an immersive theatre experience at Dunham Massey Hall. I think my work in participation is still very much at the heart of what I do. I write a lot of stories about growing up and I’m also really interested in finding new ways to tell stories who don’t necessarily think of theatre as ‘for them’. I think I’m in a really lucky position to be working across TV, radio and theatre because it gives me scope to really think about how I’m telling a story and what medium an idea would work best for.

Chip Shop Chips premieres at The Hub in Salford on February 17, 2016: www.thelowry.com/event/chip-shop-chips

For more information on tour dates, follow this link: www.boxoftrickstheatre.co.uk/production/chip-shop-chips