As a Manchester lass, I faced a bit of a struggle when it came to choosing my university. When you’ve been exposed to some of the best culture, clubbing and coffee shops the country has to offer, the prospect of moving to a quiet or (God forbid) rural area is enough to put you off going to uni. London, however, seemed like a natural progression, the only (pretty crushing) downside being the price. 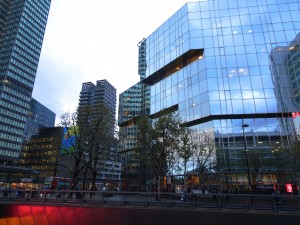 I won’t lie and say that moving to university was an easy transition. You finally get to a place in your home town where you feel content and then you face one of the most overwhelming upheavals of your adolescence. But at the same time, it’s an incredibly exciting experience, and one you can’t help but relish. For most people it’s their first taste of freedom, away from parents’ prying eyes and siblings’ teasing. You get thrown in at the deep end, and nowhere more so than London. Because once the ‘big smoke’ clears, you have to find a way of making the city, so full of people and places and energy, feel homely and friendly and calm.

London may be warmer than the North in terms of temperature, but the people are pretty cold. One of the first things I noticed is how unusual it is to chat to strangers here. People stride along with a great sense of purpose but without a smile. It’s rare to find two strangers having a casual conversation about the weather on the tube, or in the queue at Tesco.

Northerners in London are about as common as Thatcherites in County Durham. So when you find one, you get this impulsive urge to hug them and chat about their Nan’s dog’s cousin’s wedding in the church down the road from your primary school (because chances are that you’ll have found some kind of similarly tenuous link within about five minutes). There’s just something really comforting about a Northern accent, even if Southerners generally think that we’re an army of Liam Gallaghers. Oddly, even Liam Gallagher is comforting; Wonderwall came on in a club during Freshers’ Week and I honestly don’t think my lungs (or my heart) have recovered yet. 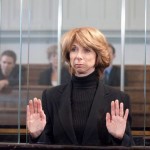 That leads me nicely on to my next observation – accents. When you move to university, you suddenly develop a small-scale obsession with guessing people’s accents. Hilarity ensues, of course, when you realise that, unless they have family up in the good ol’ North, people from London won’t know a single accent above Birmingham. Ask them to imitate one and you get a hybrid of David Tennant and Daisy from Downton Abbey. That said, I’ve had to fight pretty hard to hang on to my (already soft) Northern accent. Re-runs of Coronation Street and recordings of Maxine Peake have helped tremendously. 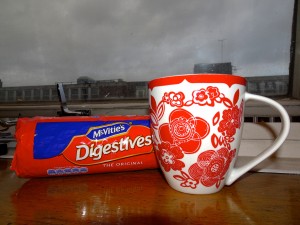 Speaking of Coronation Street, it helps to have home comforts. As rubbish as Corrie may be, I still watch it from time to time just for the wave of familiarity that hits as the titles roll. Call me sentimental, but it’s true. And of course, with soap operas come tea and biscuits – Tetley’s and Digestives to be precise. A friend revealed the other day that he didn’t drink tea until he was 18, a statement that appalled me not only as a Northerner for whom tea fixes all manner of problems, but as a pretty stereotypical Brit. I can’t count how many times I’ve thanked Tetley for my sanity. But, hey, I guess it’s a Northern thing.