As Storm Barney battered Manchester, I set out like an intrepid explorer to discover a mysterious bar in Stretford.

Now I know Stretford (in the South West of the city) may not be the first choice when planning a night out but The Sip Club is a hidden gem. And a well-hidden gem it is. I had to consult the internet on more than one occasion before I found an unassuming door next to Trading Places Estate Agents, a door which led to a space above a row of shops I must have driven past hundreds of times. 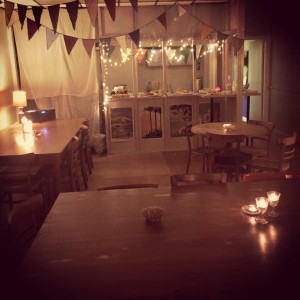 With no signage, I crept upstairs, secretly praying I wasn’t walking into someone’s flat. A shabby chic loft greeted me with sofas and tables, as well a handful of diners dotted about. As I persevered through to the back (luckily I have an explorer’s nose for alcohol being served) I was rewarded with a small bar and a barmaid with a huge smile. I was in.

The Sip Club was voted best bar in the CityLife Awards earlier this year as well as Pub of the Season by CAMRA. I spoke to owner, Heather Garlick, about the venture (which opened in April 2014) and its success in riding the crest of a Stretford house-buying wave.

“We are picking up local business. People come in after decorating and tell us that they’ve just moved to the area.”

The bar does serve food but keeps it simple with hummus plates, pork pies and chutney, a cheese plate, or a Manchester plate which is a mega mix of all the above.

On the night I visited, Barney was doing his thing outside and the England football team were doing their thing at Wembley. The combination meant that The Sip Club wasn’t as busy as it usually is. But a young documentary maker was there, filming for his final project at college. This is indicative of the overall vibe of the place. Very friendly, very informal, getting involved in a mixed bag of endeavours. Children’s drawings are displayed on the walls and there’s a second room called The Common Room where local non-profit organisations can come and meet. In addition, the bar has a nice collection of books to while away an afternoon and an ever-growing CD collection. The owners say that they’re not into music but people keep dropping in CDs.

My friend and I had come to attend The Cheese Quiz. I love cheese and I love quizzes so it was a no-brainer. The host Mark ran the quiz expertly. As a veteran of quizzes in the city centre, I can attest that this one can definitely hold its own against competition in the Northern Quarter. It was a lively atmosphere with people chipping in and good fun rounds including ‘Meg and Mog Spot The Difference’ prize and a team name prize. We entered Northern Soul writing an Article About You and Open To Bribes but were pipped at the post for the jumbo box of Nerds candy. 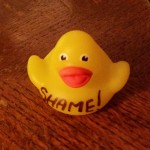 Nevertheless, we did emerge winners…kind of. We didn’t walk away with the huge wheel of Red Leicester. No. But we did win The Duck Of Shame for the team with the lowest points. And it is testament to The Sip Club that there were two teams of one, people who felt comfortable enough to come along on their own and play, safe in the knowledge that they were ineligible for the shame of the duck – only teams get that honour.

On the plus side, we were allowed to pick a subject for the next quiz. So if you fancy your chances with a Star Wars round to accompany the usual picture questions, cheese-agrams, music and general knowledge then this will be held on December 15. If you just want to have a drink in relaxed surroundings with friendly people, then you should get yourself down there. My only gripe? The door doesn’t shut properly so Barney was banging away downstairs and it wasn’t the warmest place in the world. If they can fix that, then they are definitely onto a winner.