Kitous says: “This sweet brioche bread stuffed with dates can be found anywhere in the Middle East and is a particular favourite as my mum used to make it for us. It would be sliced, warm from the oven, for when we got home from school to eat with café crème (just like a latte). If I ever had a craving for it but couldn’t make it I’d squash dates into bread to make a sandwich. Not quite the same, but you get the idea.

I like to be really generous with the dates, so there’s a good balance between the soft brioche-style dough and the orange-scented dates within. This makes four loaves; I often serve it to friends, then give them half or a whole one to take away with them.

When you’re cutting the dough before proving, make sure you slice all the way through to the middle and down the sides to reveal the date mixture. Once baked, I like to pull off these outer sections as an individual slice, then you’re left with the middle to cut up.”

For the stuffing & glaze:

Sieve the flour and baking powder into a large bowl and make a well in the centre. Pour the water into the middle, followed by the sugar, yeast and eggs.

Allow the yeast to activate – the mixture will become frothy after about 3–4 minutes – then pour into the flour mixture and mix well to make a soft dough.

Add the salt to the dough, along with the oil and lemon zest, and continue to mix and knead until the dough feels smooth and elastic. Transfer to a board when you feel it’s ready to knead and work it until it’s smooth. 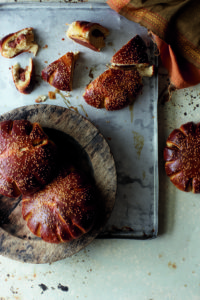 Put into a clean bowl and cover, and leave to rise for 30 minutes, until it doubles in size.

Whizz the dates and orange blossom water together in a food processor to make a paste for the stuffing.

Divide the dough into four 450g pieces. Roll out each piece on a lightly floured board until it’s a rough round measuring about 18cm across. Put a quarter of the date mixture in the middle and spread it out a little, leaving a border around the edges, then wrap the dough around the date mixture. Turn over so the seam is underneath. Repeat with the other three dough pieces, then set them aside to prove for 30 minutes.

Flatten each loaf slightly and cut the edges to reveal the mixture inside, leaving a large ball in the middle.

Brush with some of the beaten egg and sprinkle with sesame seeds, then transfer to two lightly floured baking sheets and bake for about 35–40 minutes until the bread is dark golden. After about 20 minutes, glaze the loaves with the egg wash again and return to the oven to finish cooking.

Transfer to a wire rack to cool, then slice and serve.

“This is perfect to have alongside your afternoon coffee, or even served warm with a scoop of vanilla ice cream for pudding. If I’m feeling really indulgent I’ll eat it with feta cheese, as the combination of salty feta and sweet dates is an absolute winner for me.”

Feasts from the Middle East is published by HQ and is now available to buy.