“The boards are up,” my grandma tells me earnestly over the phone. “They’ve started building the Fenwick’s window.”

Since I moved away from Newcastle it’s become her duty to keep me up to date with the window’s annual progress. What day the boards went up, when the unveiling will take place, what people reckon the theme might be – she knows. And she knows I’m eager to hear.

This call happened a few weeks ago. Now the queues are down the street to see the window. But if you’re not a Geordie you may be confused as to what I’m on about. I’m talking about one of the largest Christmas showcases in Europe. Never mind the displays in Selfridges or Harrods. Fenwick’s window is the real herald of Christmas.

Perhaps we should start with Fenwick itself. Founded in 1882, the Newcastle shop is the original and the biggest department store in the North East. It’s a trusted and local brand, and a favourite shopping spot for many here. And when they deck their halls for the festive period, they know how to do it properly.

For the past 44 years the same Bavarian company has made the window display and all the 3D moving figures, scenery and puppets. Specially commissioned music and narration are also recorded and played so the different scenes tell a tale much like a giant animated storybook. And the theatrics aren’t just confined to behind the glass. At this year’s unveiling, thousands of fake snowflakes fell from the top of Fenwick onto the waiting crowds below in Northumberland Street. That’s pretty magical, right?

Visiting the window has become an annual tradition, so much so that most North East families consider it to be an essential part of their festive celebrations. Children and adults alike press their noses against the glass to view the newest creation, which is a guarded secret until the grand reveal. 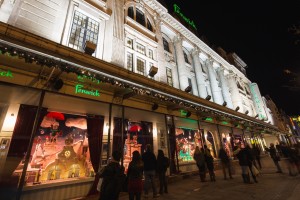 The first Fenwick’s Christmas window display opened in 1971 with Camberwick Green characters and has continued to be a hit ever since. With varying themes ranging from fairytale and Victorian classics to the Nativity and animal magic, it’s always exciting to discover what the designers have up their sleeves.

Apart from the controversial 2002 Christmas in Another World theme, which showed Christmas from an alien’s perspective and was heartily disliked, the displays always receive a warm reception. Occasionally themes are so popular that they make a reappearance years later, such as the impressive Gulliver’s Travels display and last year’s Alice in Wonderland window which first appeared in 1981 (one of my personal favourites was the The Snowman in 2005, featuring characters from the Raymond Briggs story).

It would be difficult to find a North-Easterner who didn’t visit the window as a child and was in awe of its magic, and perhaps that’s why many people return every year, now bringing their own children and grandchildren.

I’m sure some children today adopt the same approaches I did as a kid (and admittedly still do as an adult). Whether it’s walking past the window and trying not to look until you get to the first scene so you can see the story in the right order, or the satisfaction when the narration and your walking pace match up so you’re looking at the correct scene for the accompanying story, or even the photos your relatives take of you next to the final scene, everyone has a ritual they enjoy repeating each year (I also love searching for the little details you miss at first glance).

I managed to grab a quick peek at the window when I was home last weekend. Despite it being November (a tad early for Christmas cheer) and pouring with rain (and I mean it was stotting down) there was a patient queue snaking down the street. This year’s theme is Once upon a Christmas and portrays the tale of Santa crashing his sleigh full of presents into Fenwick’s roof. Thankfully, his faithful elves are there to help him get back on his way. There are plenty of North East landmarks in the scenery too, including the Angel of the North, the Tyne Bridge and Grey’s Monument, with Earl Grey himself sporting a toon army scarf.

I encourage you, nay, implore you to visit the window, especially if you have little ones to share the experience with. You can see what this year’s festive offering looks like (unless you don’t want any spoilers!) in the splendid gallery below by Northern Soul‘s North East Photographer, Phil Pounder.

Fenwick Unwrapped exhibition, which shows visitors how the festive window has been created through the years, is now open at Newcastle’s Discovery Museum until January 10, 2016. More info here.