Review: The Barber of Seville, Jenůfa, Kiss Me, Kate, Salford

Kiss Me, Kate opens with Another Op’nin’, Another Show, a hymn to hoofers and thespians everywhere. After nearly a week at The Lowry witnessing the Autumn season of Opera North productions, Cole Porter could include critics. I’ve seen so many curtains rise and fall this week I can’t help but think of the late Yogi Berra’s maxim, ‘it was déjà vu all over again’. Not that I’m complaining as it’s been a feast of blistering performances, sumptuous sets and breath-taking arias.

The season began with Rossini’s romantic comedy, The Barber of Seville. It’s a simple tale of chasing tail. Count Almaviva (Nicholas Watts) is smitten by Rosina (Katie Bray), the rich ward of Doctor Bartolo (Eric Roberts), who desires her, and her money, himself. Almavavia is having some difficulty declaring his undying love to Rosina as Bartolo keeps her on a tight reign, jealously guarding her assets with the beady eyes of a ‘decrepit casanova’.  To help him achieve his heart’s smite, Almavavia employs the wily ways of Figaro (Gavan Ring), the Barber of Seville. Figaro is not only the dispenser of de-hirsuting but also the lusty purveyor of plans, potions and picadillos for the lovelorn men of Seville and, looking not unlike George Cole in the early St Trinian’s capers, performs his tasks with a knowing guile and a hearty hay-ho. 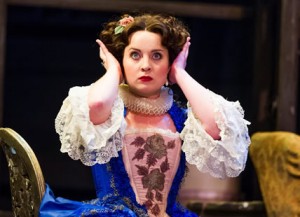 Russell Graig’s thoughtful set, derived from the oeuvre of the contemporaneous Watteau, gives the players space to perform the intricate trails of love in search of closure. Under the baton of Stuart Stratford and the direction of Giles Havergal, the whole thing rattles along with a comic pace and a sexy energy. The hilarious conclusion of Act One left me begging for more and Act Two gave me the happy ending I so wanted. After much slap-stick deception, Rosina becomes Countess Almavavia and an assured spot on the Real Housewives of Seville. It was a lively and pacey production of a much-loved favourite.

Jenůfa by Leoš Janáček was first performed a century after the good Barber, leaving the light optimism of the early romantic period for the dark modernism of the turn of the 20th century. Set in the rural hinterland of Moravia, it tells the story of half brothers Steva (Daniel Norman) and Laca (David Butt Philip) and their pursuit of their cousin, the beautiful Jenůfa ( Ylva Kihlberg). Thanks to the quirks of Moravian law, Steva has been enriched by the legacy of Buryja the Miller as Laca has been impoverished by it. And, by the quirks of Moravian biology, Jenůfa is pregnant by Steva but loved by Laca. You’ve seen enough episodes of Jeremy Kyle to get the picture.

Neatly divided into three acts, Act One takes place on the banks of the village river with Jenůfa dreaming of the day she can marry Steva and spare the shotgun of her stepmother, The Kosteinicka (Elizabeth Sikora), the church sacristan and all round moral compass. Having escaped conscription, a drunken Steva mistreats Jenůfa and unable to hide his raging jealousy any longer, Laca cuts Jenůfa’s face. Gee, the girl can’t get an even break. Abandoned with child and scarred by the same lousy family. Steva’s feckless bravado is neatly balanced by Laca’s brooding resentment while Jenůfa’s innocent happiness is soon replaced with the tragic air of unbalanced acceptance of her unhappy fate. The Kosteinicka simmers with moral rectitude. All the performers excel as a terrible darkness befalls the opening of Act Two.

The simple abstract neatness of Tom Cairns’ design and assured direction follows the action to the interior of the Kosteinicka’s home. Jenůfa has given birth to a fatherless child, an abomination in the eyes of her stepmother.

As Laca proposes to a reluctant Jenůfa, the Kosteinicka sees the only obstacle to a morally acceptable outcome is the child. She abducts it and with God-given right on her side, kills it. As a piece of drama, it was jaw-dropping.

Act Three brings a kind of closure and a hint of redemption. It is Laca and Jenůfa’s wedding day. An unhappy day if ever there was one. As villagers gather to celebrate, the body of the dead baby is found frozen in the ice, and with it the Kosteinicka’s cold confession.

As the curtain closed and tears rolled down my cheek, Laca and Jenůfamove held hands in a gesture that gave us the glimpse of a possible future. It was a moving tale, beautifully told.

Kiss Me, Kate was an altogether more upbeat, sassy affair. A revival of Cole Porter’s reworking of Shakespeare’s Taming of the Shrew, it is a play within a musical within a play. I was a little unhinged by the dialogue between the tunes (unheard of in opera) but after the opening number, Another Op’nin, Another Show, my Frasier foibles were soon forgotten. It was a belter.

To-ing and fro-ing between a backstage and on-stage production of Shrew, it is a battling, bruising love story of a divorced couple, Fred Graham/Petruchio (Quirijn De Lang) and Lilli Vanessi/Kate (Jeni Bern), and a simmering, sizzling back-burner of a hot thing between happy-go-lucky hoofer, Bill Calhoun/Lucentio (Ashley Day) and good time girl Lois Lane/Bianca (Tiffany Graves). 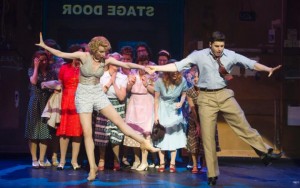 Lois’s Always true to You in My Fashion and Bill’s tap routine Bianca, all the while trying to figure out why can’t they behave, are true highlights of a show full of them. Fred’s I’ve Come to Wive it Wealthily in Padua, Lilli’s I Hate Men and Tom, Dick or Harry all added to a sweet, arousing, downright dirty (given Porter’s talent for the lyrical innuendo) performance. First Gunman (Joseph Shovelton) and Second Gunman (John Savournin) Morecambe and Wised it up with Brush Up Your Shakespeare. All in all, it was too darn hot!

It was an exhausting, exhilarating and exciting week of great performances, with the match ball for a hat trick of triumphs going to Opera North.